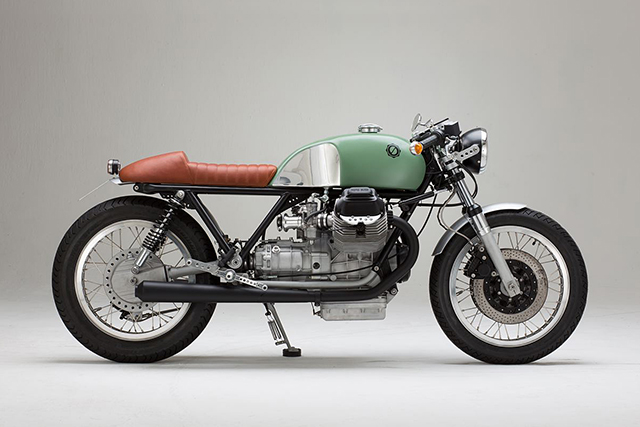 When a builder is passionate about the bike he is working on, you can see it in his work. Axel from Kaffeemaschine has almost reached a state of oneness with Moto Guzzi’s. This stunning build is one in a long line of Guzzi’s that were lucky enough to have received his touch. Given the name ‘Machine 14’, the bike has the stance and smooth lines of a classic cafe racer. When it comes to aesthetics, Axel usually chooses less is more. Built up from a stock Le Mans 3 donor bike, this is very much the machine you would find parked up outside the local Kaffeehaus – just after it clocked the Ton. The build brief for the Guzzi was simple, with the Swiss client looking for a custom Guzzi with a decent riding position and the ability to carry a passenger. To fulfil the customer’s needs, a new seat was fashioned inhouse by Axel, along with the fuel tank, scalloped to allow for a better riding posture. A set of pillion pegs have been built in the same style as the rear sets, so the sporty aesthetic of the Italian machine isn’t taken away by the ability to take someone for a blast on it. While the bike was stripped down, Axel lightened the look of the machine by detabbing the frame, and running a new wiring loom. Engine performance has increased as well, with the powerplant being blown out to 1000cc, with the fitment of a lightened clutch and sporty cam being added during the rebuild. The heads are twin spark units, being fed the power by an electronic ignition system. For something different, the exhaust setup features BMW silencers, mounted up using adaptors and the whole lot coated in matte black. To help with handling, the suspension has been touched up as well. The front forks now feature FAC dampers, with Ikon shocks sitting at the rear. Although Axel was satisfied with the stock twin rotor setup, stainless brake lines have been fitted, running to modern brake cylinders. To add to the build, a set of new high shoulder rims have been spoked and mounted, wrapped in Bridgestone BT45 tyres. With experience in modifying the Moto Guzzi marque, Kaffeemaschine has managed to produce another clean build. By going their own way and highlighting parts of the build by using their own Kaffeemaschine alloy products, this is definitely something you would want to be happy to go with.