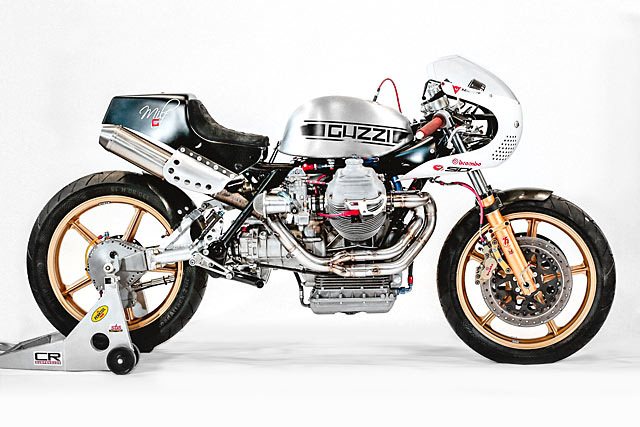 It’s all the result of one motivated madman, Paolo Danese, a 51-year-old motorcycle nut who lives in Verona in Northern Italy. While an obsessive for all things two-wheeled he has a particular soft spot for Moto Guzzis. And while he does incredible work it’s all a side project for him.‘So many people ask me where I have my workshop or my store,’ he says, ‘but that doesn’t exist. I just have a garage and that’s it’. And from that tight little space he’s managed to turn out this beautiful endurance-racer inspired Moto Guzzi, which was collected in bits over a number of years. ‘The bike started life as a frame from a 1978 Le Mans MKII I purchased from a friend ten years ago,’ Paolo explains. ‘But the engine, also from a Le Mans, I purchased online’. But his plans for the engine would have to wait until he’d finished with the Tonti frame. ‘I wanted to lighten it and make it more rigid,’ Paolo says. The first step was easy – everything was trimmed and shaved down and detabbed. But the work didn’t end there. The rear end was lopped off and a new single shock system was mounted to a heavily braced box section alloy swingarm. While up front, the suspension is similarly gorgeous. What you also can’t see is the incredible amount of time and effort that has gone into the Le Mans’ engine block. ‘I had it extensively modified by a friend of mine, Lino Zenari’, Paolo says. Lino’s work took the 844cc transverse v-twin to just on 1000cc’s – but displacement is only part of the story. Hidden underneath those blasted engine cases are high-compression pistons, larger valves, rocker arms, strengthened valve springs, a whole bunch of CNC work, a clever oil cooler system, lightened flywheel, new 40mm carburetors, close ratio gearbox, new ignition system and 8/33 gearing at the back.

Phew. It’s all carefully considered, high quality work. Just take the exhaust system for example. Paolo and local exhaust guru Pietro Fasoli from La Marmitta spent no small amount of time testing and fitting different muffler setups for the best results on the dyno. But they also had to look damn good. ‘We wanted something aesthetically pleasing and of a clever design but it had to also be functional,’ Paolo says. ‘After several attempts we managed to get the volumes and resonances correct which gave us excellent results’. [ Thanks to Ferro Magazine | Photos by Mattia Negrini ]