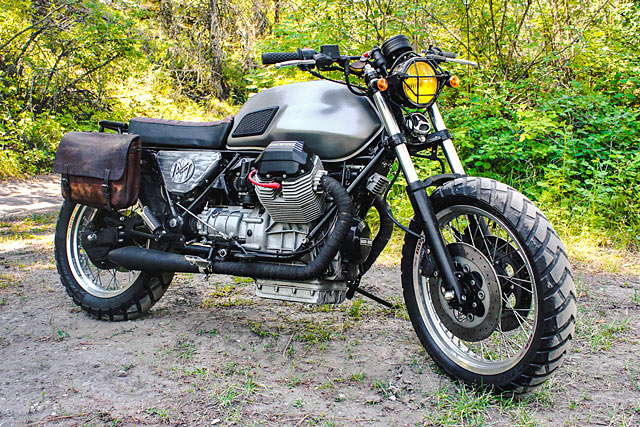 If my Dad had owned a Moto Guzzi of any kind I’d have thought that was pretty darn cool; but it turns out kids these days expect a hell of a lot more and a stock 1996 Moto Guzzi California 1100 just isn’t good enough. Spurred on by his children and pictures of some sweet Guzzi customs the owner of this here ride needed someone to build his dream. In Brent Giesbrecht of MotoVida in Kelowna, Canada, he found just the man, even if Google maps showed they were exactly 4673km apart. But the long distance love affair paid off with the old soul turned into a sweet big bore Scrambler they call V11x. It’s easy to see why the owner decided the travel was worth it, being new to the custom world and having owned the Guzzi since new you don’t want to hand your pride and joy over to just anyone. At MotoVida, Brent and the team have created a relaxed atmosphere where everybody feels welcome, an ego free zone and a true community vibe. As Brent tell us there are a few other reasons to go to Kelowna, “quick access to some of the best riding around and with a climate that offers a lengthy riding season. Not to brag but we also have some of the best wineries, microbreweries (we are beside one), micro distilleries around! Everyone should come for a visit!” Down to business with the beastly Guzzi up on the bench, you could forgive the crew for thinking they might have bitten off more than they could chew. The California is an enormous cruiser style motorcycle and tips the scales at a rather obese 251kg without fluids. So first things first, she needed the Jenny Craig treatment and parts started to come flying off. “We binned all the chrome, gauges, lights, wheels, seat, tank, fenders, rear suspension, luggage racks, emissions gear, air box, tractor battery, and fuel injection.” sighs Brent.

[superquote]“With the beastly Guzzi up on the bench, you could forgive the crew for thinking they might have bitten off more than they could chew.”[/superquote] Assembling the rolling chassis started with the selection of significantly lighter wheels from Excel. The aluminium items are laced up to the original hubs and now measure 19″ at the front and 18″ at the rear with both wrapped up with Avon TrekRider tyres. The factory front end comes with decent kit, now blacked out the BiTubo forks do the job with adjustable rebound and twin discs with Brembo calipers working well in the braking department. But to deal with the significant changes to the bike and riding style the rear end gets longer, progressive rate coil over shocks. Floorboards might be comfortable on a cruiser but they have no place on a scrambler ripping down a dirt track, so the lower subframe was modified to move the stock controls back 6″ and mounts fabricated for the Biltwell pegs. With the fundamentals sorted the visual design could start to come together and this was Brent’s greatest challenge of the project. “Honestly, the hardest part of the build was creating a bike that would keep the client stoked but not copying in any way the bike he originally saw as his inspiration. I wanted to create something unique while still respecting his vision.” Starting at the rear the stock fender was heavily cut back and remounted to provide the rider with plenty of protection. Both the seat and pan were custom-made as a long single saddle with a small but sturdy parcel rack behind. A secondary saddle to match was also made that can bolt in place of the parcel rack for extended two up riding. Wanting to narrow the midsection “the ECU and a smaller battery were moved lower and forward from stock position while relays and other electrical were moved inboard of the frame,” explains Brent. Most of which you’ll never see thanks to the raw metal side covers that were fabricated in-house and feature the company logo on a second piece of steel for an industrial look. Adding to the utilitarian vibe are the Swiss Cavalry saddle bags circa 1940 that are attached to the side mounted luggage racks. With the big ugly tank long gone the replacement comes from another Guzzi, a factory V7II. Which required some modification to install the fuel pump and pressure regulator inside, while a bag matching leather strap compliments the outside. Press the starter button and the thundering 1064cc air-cooled V-Twin comes to life before settling down into slightly lumpy idle. These engines aren’t about horsepower but stump pulling torque all the way through the rev range. To free it up Brent ditched the carbon canister and huge airbox and allows the motor the breathe easy thanks to a pair of K&N pod filters. The enormous chrome exhaust also gets shown the exit, being restrictive and weighty; with the stock headers wrapped and finishing in twin reverse cone mufflers. Not wanting to put on anymore weight on the scrambler than was absolutely necessary, a single Acewell speedo was chosen. While lighting is taken care of with a Lucas replica at the rear and a yellow lensed headlight with hand-made grill. The final touch is the gold Renthal bars which like the headlight were the owners request and it was time for him to come and collect. “It is a blast to ride – it really ended up riding like a burly V7, and we built it to ride,” a proud Brent reports. And the lucky new owner would make sure of that choosing to climb aboard and thrash the Guzzi nearly 5000km back home to his waiting kids; who now have to be chuffed that Dad rips it up on his own MotoVida special, show and tell anyone?