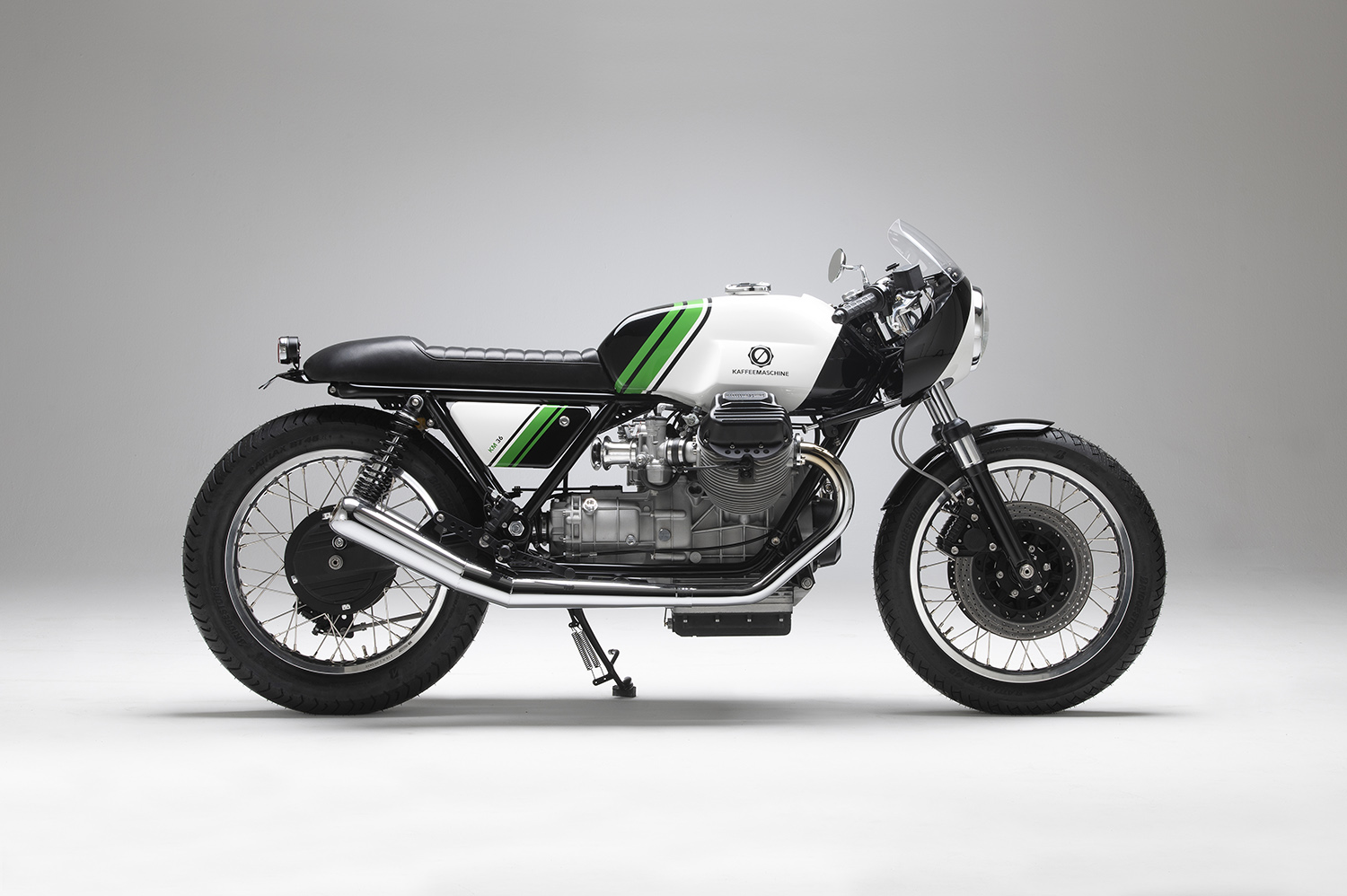 Not every custom motorcycle is going to be everyone’s cup of tea, but for the endless years that we’ve featured the builds of Axel Budde, there is rarely anything but glowing praise. It’s easy to see why, a beautifully built Moto Guzzi with not a single corner cut, is a hard thing not to deeply desire. But some would argue each build is quite the same, well hold on for just one moment, because one very happy customer of Hamburg’s Kaffeemaschine appreciates each bikes unique personality so much, he had to have another. Introducing KM36, a stunning cafe racer Guzzi, that’s been built by Axel to the client’s desire, who decided he had to have a second piece of perfection.

There is an artistic and innovative streak that has always run through Hamburg and Axel isn’t the only part of this project from the city that has those skills. Client Mike is a creative director by day and a true lover of motorcycles in his downtime, shown by putting his money where his heart is when he first bought KM8. A classic Kaffeemaschine creation, it hit all the right spots, that is until he saw Axel’s later work, KM15 with a more sporty cafe flair and when it was sold to a gent in London, Mike felt a longing.

So, to get the bike that truly captured everything he was after he sold number 8 and commissioned this here very build. “As I know Mike and his creativity, I left the choice of parts and paint design to him,” Axel tells us, not an easy thing to do for a man who has perfected his craft doing it all his way. To start the build the perfect donor was found in the form of a 1981 Moto Guzzi SP1000, which was then expertly stripped down till absolutely every last part had been removed from the frame.

One area that always receives a huge focus on a KM build is the engine and once again the thumping V-Twin has been pulled down and built to the highest of standards. Inside the crank swings a set of 1000cc pistons, that run inside the newly honed cases. The camshaft is one of KM’s own and the valve train is replaced with that from a Le Mans model. It is all dynamically balanced with the transmission rebuilt and given a new and lightened flywheel. This makes for one super smooth revving engine, that has the torque of a freight train.

On the outside, the engine uses a bunch of KM parts and covers, with the ports machined to 36mm to match the new carbs. These wear a set of stunning machined velocity stacks, that of course can use slip-on filters when required. “We fabricated a minimal wiring loom that includes a modern generator/regulator and LiIon battery.” Then to finish out the engine and achieve maximum power, a set of KM’s stainless steel headers and full exhaust system has been fitted, finished in chrome to the client’s desire.

The frame is one of the Guzzi’s strongest points, the full-duplex cradle providing mid-corner stability that was ahead of its time. But the same can’t be said for the stock suspension that is definitely showing its forty years of age. So, to correct that and then some, Axel has completely rebuilt the front forks using a set of big dollar Bitubo internals. The rear end features a completely rebuilt drive system, before being fitted up with Ikon shocks. The brakes are all rebuilt and new wheels feature BT46 Bridgestone tyres.

Now that Axel had built the perfect base, Mike’s styling tastes could be added over the top and one of the key components is the NOS Le Mans I tank. “The seat was made upon our seat base and the client wanted the carbon fibre storage box inside of the empty frame triangular space.” This is all part of maintaining an ultra-clean finish, which includes hiding the electrics under the tank, along with a partitioned oil breather tank. Then that front fairing that Mike had so longed for could be bolted up, it’s an in-house KM part made from carbon fibre.

The paint to is of Mike’s choosing, but this time he had to come up with the design for himself and he’s had the bodywork covered in a stunning white and black gloss base, with light green highlights and the essential KM logo’s hand painted onto the tank and side covers. “All alloy bolt-on parts are Kaffeemaschine, incl. our USB charging socket in the steering head,” Axel explains. And to finish out the build a stylish and generously padded leather seat goes onto the KM base and allows for hours of comfort in the saddle. Fully loaded KM36 weighs just 184kg and pumped up with power, this is a beautiful bike that can literally do it all, corner carving to concourse.