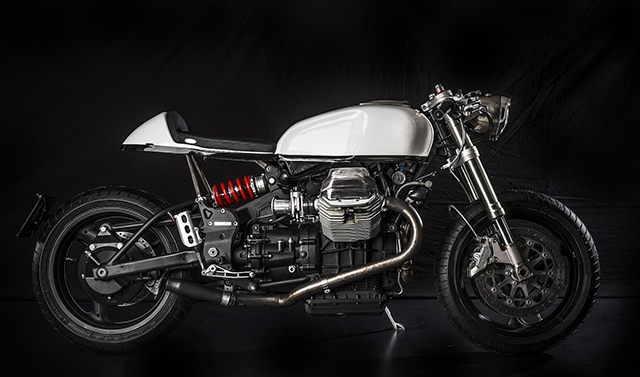 Moto Guzzi is one of Continental Europe’s classic brands and even more so when you think of Café Racers, making it one of the perfect manufacturers to choose when deciding what bike to base a custom build. But then you go and pick one of their heaviest bikes, all covered in plastic, weighing a gargantuan 500lbs and with an enormously long wheelbase. It seems you like a challenge, one that the boys of Emporio Elaborazioni Meccaniche in Rome were more than up for! The Moto Guzzi V11 is an unusual creature, from the visual appearance you would assume it was meant to be a canyon carving light weight, but the specifications reveal the enormous weight, ergonomics and freight train like V-twin to be more of a highway roadster. But the EEM team of Dopz, Schizzo and Massimé saw the potential and as Dopz explains “We believed on what was under those plastics and under those heavy lines to bring out the classic style of a Guzzi bike; to make it a real Guzzi-racer.” There was a very deliberate plan in the build, strip as much of the unnecessary weight out of the bike while making the most of the mechanical components, even celebrating their mass. With this in mind EEM started at the rear of the bike showing off the unique elements of the shaft drive. A new rear subframe was fabricated to allow for negative space to enhance the mechanicals while the muffler was made particularly small for the bike so as not to impede the machine like vista. The seat is an old hand made Guzzi racer unit the boys found at a local market, with plenty of work to get it just right without taking away any of its character and maintaining a view to the rear shock. Reduced weight meant a more sporty front end could be utilised and when in Rome… well how could you possibly go past the beauty and performance of a Ducati 998 set of forks, Showa internals and Ducati stopping power, bellísimo! The one problem with such a Ducati setup is the fairly large fluid reservoirs that would normally be hidden behind fairings. But EEM don’t just build, they fabricate and with genius innovation they incorporated both the brake and clutch fluid reservoirs into the top triple tree and devised a system to ensure enough fluid was held so the bike could be ridden hard, “it’s a bike not a steady piece of art!”

At this point you’re probably scratching your head about the tank and just where it comes from, I know I was. Knowing it clearly wasn’t the original, as hard as I tried I just couldn’t think which fellow Italian had lent its metal. That’s because this tank not only comes from the Suzuki factory in the land of the rising sun it has been heavily modified to slim it down and improve the sideline profiles. But there was a problem, unlike the Guzzi item there was no internal fuel pump, not a big issue for the skilled men at EEM who fabricated an external system you’ll probably never see. The same treatment was given to the normally complex Guzzi oil system, whereas many builders simply block lines off or add filters, EEM instead improved the systems performance while reducing its bulk. Then there are the details that really set this build apart, the stunning 1950’s Falcone Sport headlight that retains its worn feel but perfectly houses a digital dash. The exhaust that while new looks like it could have been salvaged from a much earlier time, the same worn metal look featuring on the valve covers, tank cap and the re-work subframe. All of which works in harmony with the 1970’s V7 Special white paint that gives this modern steed even more of a classic touch. While just to prove there is almost nothing they can’t do EEM made a set of 90’s Fiat turn signals look perfectly minimalistic and are the final touch in making the Guzzi road legal.

And if the whole build wasn’t magnificently Italian enough the Guzzi carries the name ‘Il Sorpasso’, from the 1962 cult classic film about two very different strangers sharing a road trip from Rome to Tuscany. It’s almost the perfect metaphor for EEM’s V11 build, a plain original bike, an outlandish idea and the collaboration to form something special; all result in a machine perfect for that dream Italian countryside ride.