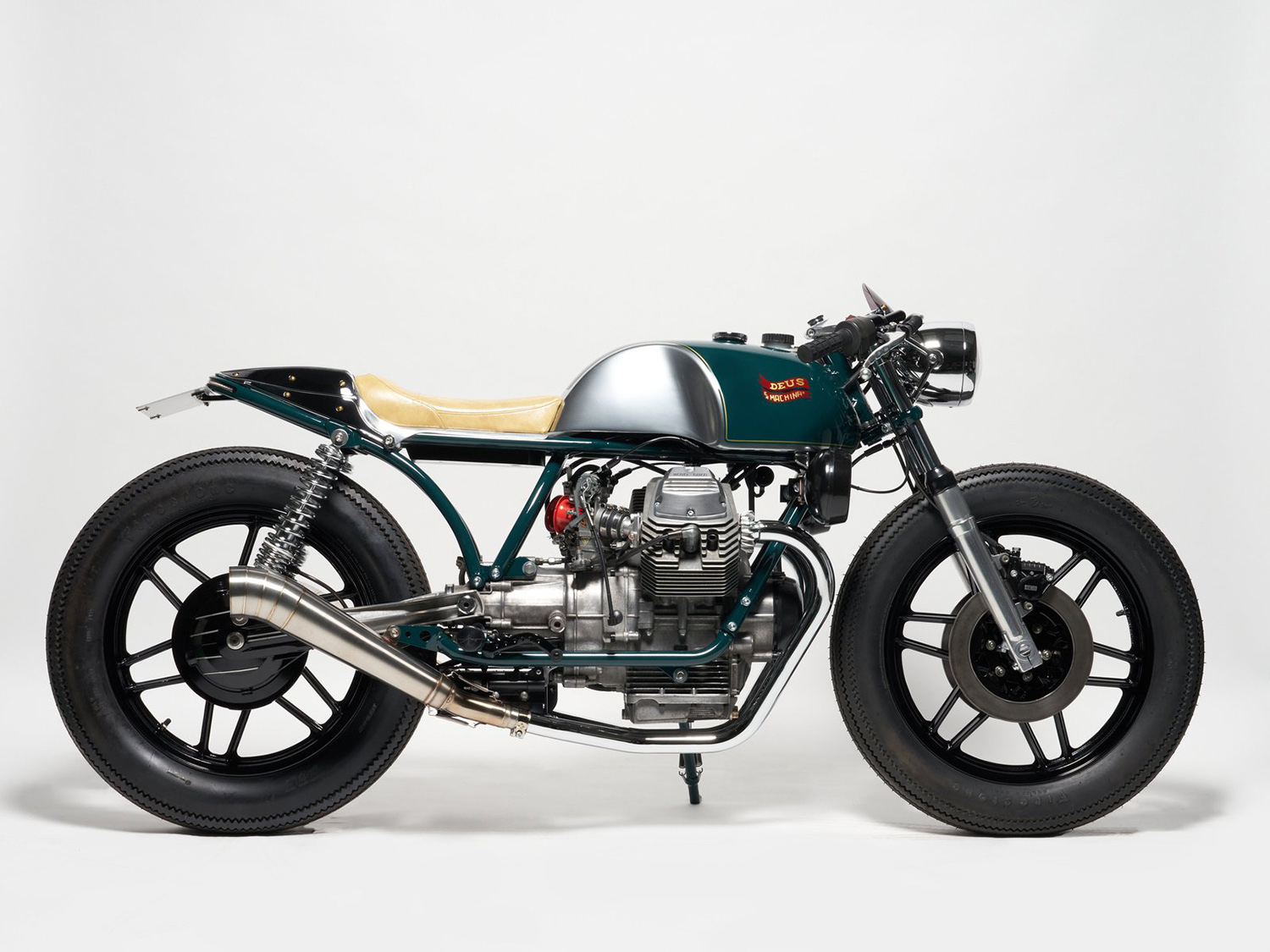 Founded in 1921 in Genoa, Italy though headquartered out of Mandello del Lario, Moto Guzzi is one of the longest surviving Italian motorcycle companies of all time, having just celebrated its centenary earlier this year. And to commemorate the occasion, Deus Ex Machina is now honoring the Mandello marque’s 100th anniversary with a special one-off cafe racer from the lifestyle brand’s Japan location in Tokyo’s Asakusa district.

The cafe’d Guzzi takes its name from the famed Italian firearms manufacturer and has been christened the “BERETTA.” Starting life as a 1980 Moto Guzzi V50 MK2, the project was headed up by Tomoyuki Soeda, though Deus Japan’s head wrench set aside his personal proclivity for brat and Suka-tune-style customs in order to deliver this retro-inspired cafe racer. The donor’s engine, main chassis, front fork, swing arm, wheels, and dual disc Brembo brake setup all remain present, allowing Soeda to focus his attention on the V50’s visual transformation.

Once stripped down to a rolling chassis, the team in Tokyo lopped off the stock subframe and replaced it with a custom, slightly upswept hooped unit that follows the curving profile of the rear tire. A cutout was made to house a flush-mounted LED brake and taillight strip with built-in indicators and a new seat-pan was whipped up to accommodate the build’s custom khaki-colored leather seat which tapers in the rear to two converging points. The pointed ends of the new saddle are extenuated by a finned aluminum tail cowl.

Next, Soeda hand-formed a new aluminum tank that takes blatant inspiration from Guzzi’s GP racers of yesteryear with pronounced knee-dents, a knurled cap, and a gentle sweeping line where the fuel cell meets with the seat. In a bid to keep everything ridiculously tidy, the brake fluid reservoir’s been hidden away in the front of the tank, with a cap peeking out from just hind the top triple. When viewed from above, the width of the tail and subframe remains unchanged until reaching the knee-dents in the tank and widening out, resulting in what Deus’ Japanese shop has called “mermaid contour line.”

While the BERETTA’s Telehydraulic gas fork is still present on the build, the cockpit and headlight arrangements have been jettisoned in their entireties. Guiding the way is now a modern LED headlight set inside a retro circular housing and held via one-off brackets. As something of a nod to the small front fairing that encompassed the stock Guzzi’s headlight, the shop’s crafted a tiny one-off flyscreen that partially shroud’s the project’s lone piece of instrumentation — a Motogadget MST Vintage analog speedo with integrated warning lights.

The tinted flyscreen is also set in a bespoke subframe that’s secured via brass hardware. Other additions to the new rider’s quarters include a set of vintage clip-ons, new levers mated to steel-braided lines, and a steering stem nut with Moto Guzzi’s classic eagle logo laser-etched into the metal.

Putting down just under 50hp in its stock form, the Guzzi’s air-cooled 490cc engine has largely been left untouched, though the Italian V-Twin has seen its original pair of Dell’Orto carburetors swapped out for a modified FCR setup. The OHC two-banger’s symmetrical factory header also remains in play, though in place of the system’s ‘80s era mufflers is now a set of GP-style megaphone silencers.

Thanks to a myriad of electrical components and other ancillary bits being discreetly tucked away under the new tank, seat, or tail cowl, the space beneath the seat is entirely neat and uncluttered and no longer requires the V50’s stock side-covers to hide away these unsightly elements. Tomoyuki also treated the nearly-finished build to a pair of covered HELLA spotlights that mask the transverse-mounted V-Twin’s protrusion from either side of the frame when viewed directly from the front.

Like the project’s saw-tooth-treated tires, Soeda wanted to select a paint job for the BERETTA that looked unmistakably old-school and period-correct, ultimately leading to the bike’s combination bare metal and dark turquoise livery which is complimented via gold pinstriping and hand-painted “Deus Ex Machina” logos on the tank. The same dark turquoise hue was also used to powder-coat the Guzzi’s duplex spine chassis, subframe, and triple clamps, while the stock wheels were hit with a coat of gloss black.

All in all, Soeda and the gang have managed to deliver a remarkably clean, cafe racer homage to the now-century-old Italian marque, while simultaneously still retaining some of the Japanese shop’s signature DNA. It was a bit difficult not having a few reservations about the future of Deus’ custom build program after DEM’s longtime US Motorcycle Director Michael ‘Woolie’ Woolaway announced his departure from the brand around this same time last year, though projects like this — with remarkably cohesive designs, beautiful hand-formed metalwork, and expert executions — make it abundantly clear that we’ve got absolutely nothing to worry about.