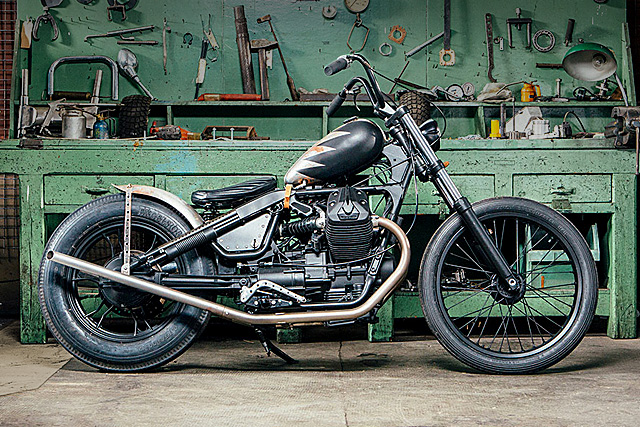 When Sky Uno, the Italian TV Channel, was looking for the 10 best custom bike workshops in the country for their TV show “Lord of the Bikes”, it came as no surprise that our friends at Anvil Motociclette were selected to compete. Each week, two workshops are pitched head to head in a themed build-off. They are given a new bike, a few Euros for accessories and then battle it out to impress the judges. When it came time to throw down, Anvil was pitted against their fellow Milanese builders South Garage, both given a brand new Moto Guzzi V7 II, €3000 for parts and the theme – ‘Quentin Tarantino’. Okay, so that’s a little out of left field Mr TV Producer. So how long do you give the teams to build their machines while your cameras scrutinise every move, 6 months? 3 months? No. Try 15 days. For mere mortals this would have been followed by a series of Samuel L. Jackson’s favourite Tarantino written expletive laden monologues and then a fainting spell. But Marco and Phonz weren’t fazed and as the new V7 Stone II in Rosso Impetuoso (impetuous red) was wheeled into their shop they simply lifted it onto the bench and sat down to plan their assault. If you know Anvil’s designs you’d understand the red was never going to stay but with just 15 days to build a completely custom bike surely they’d stick to their successful formula. Wrong! Tarantino is all American, loves the ’70s and has a thirst for graphic violence and never mind they had never built a hardtail before nor the insane time constraints, the decision was made that it just had to be a bad ass bobber. A design was mapped out on the computer and ways to de-construct the frame examined until it was decided the best way to start the bobbing of this brand new bike was to fire up the grinder and cut the whole back half of it off. With the sparks flying and brand new metal falling to the floor it’s important to remember that the Guzzi is a shaft drive which adds an extra complicating factor and there aren’t any hard tail kits you can simply buy off the shelf. Instead the rear end is completely reworked and hard tail achieved by the new framework that starts at the engine, is crafted from high-grade stainless steel and solid mounts the shaft drive for an incredibly strong finish. Tabs were then added for the pieces that were to come, all the welds smoothed out and a coat of matte black applied to their new rolling chassis. Clearly the cafe racer lines of the stock tank were never going to work and the obvious choice was made to grab a Yankee tank and bolt it to the frame for instant bobber appeal. Not so fast, the V7 is a modern fuel injected machine and requires a fuel pump, regulator and filter that is designed to go inside the standard tank. To make it all work a new more powerful pump is mounted under the backbone with the new tank tapped for a return line and high pressure hoses used throughout. With the system functioning perfectly the tank has been mounted so that the filler cap is now above the line of the top triple tree and the rear low down and the boys were beginning to see the lines of their bobber take shape. The other crucial piece of body work is the all important rear fender that has the ’70s look down pat, with hand formed and drilled struts holding it in place with wing nuts for the industrial effect. Ever seen one of Anvil’s brilliant bikes? Then you understand they like their colour schemes matte black, raw metal and absolutely no colours or candy! That’s exactly how they’ve kept the V7 with the new tank getting black graphics and cap with the top left raw and the new rear fender also paint free. To clean the look of the under seat compartment up they fabricated two metal side covers, gave them a shot of matte black and finished them out with a riveted pattern graphic. Instantly this draws the eyes upwards to the stunning calf skin leather bobber seat, with chrome springs that couldn’t be more perfect for the theme. To give the bike some more Tarantino feel there had to be at least a hint of violence, ok it had to be over the top and nothing says it’s about to go down Pulp Fiction style like a rail mounted pump-action Shotgun and a huge machete mounted to the front end with leather straps. That front end remains standard due to budget constraints but to give the bobber look without longer forks a massive 21 inch rim was laced up and some old school rubber fitted up. The shaft drive rear again presented a challenge, with just 15 days and short on cash a switch to a spoked rear wheel was simply impossible but the guys came up with a way of drawing your attention just to the tyre by fitting rubber from a ’50s pick-up truck and boy does it look bad ass! Anyone who has their shotgun passenger as an actual bloody Shotgun probably has little need nor desire for a front brake and not only does it clean up that big front wheel but allows the new bobber bars to remain absolutely clean. There is the new throttle, clutch lever and grips and absolutely nothing else with a small single mount headlight completing the look. The Guzzi’s famous longitudinally mounted V twin lends itself well to the ’70s bobber theme and nothing creates the period correct sound track like a pair of hand-made pipes that run all the way to the rear and finish in baloney cuts. The entire engine is murdered out in the same matte coat as the rest of the bike with absolutely nothing spared. But to create some contrast without costing a dollar the guys removed the factory foot controls, ground them down and drilled them out to perfectly match the rear struts and maintain the continuity of the industrial look. Look a little closer to the paint work and you can see that it has a slight textured look, that’s because a military grade paint was used for a little more of a nod to Tarantino’s love for some seriously insane violence! It’s these little touches of detail that combine with the drastic measure of creating the world’s first Guzzi V7 II hardtail without ever breaking the theme that show you how just how finely tuned the skills of Marco and Phonz really are. That they did it in 15 days, with a tiny budget and a film crew in their face shows that Mr Tarantino, if you’re reading, these are the perfect two lads to build a bike for your next film. Named “Raise Hell” and they’ve already given you your title and the perfect steed for your next Django Unchained kind of killer. Because, to paraphrase a quote from Jackie Brown – “Anvil V7. The very best there is. When you absolutely, positively got to kill every motherfucker in the room, accept no substitutes.”