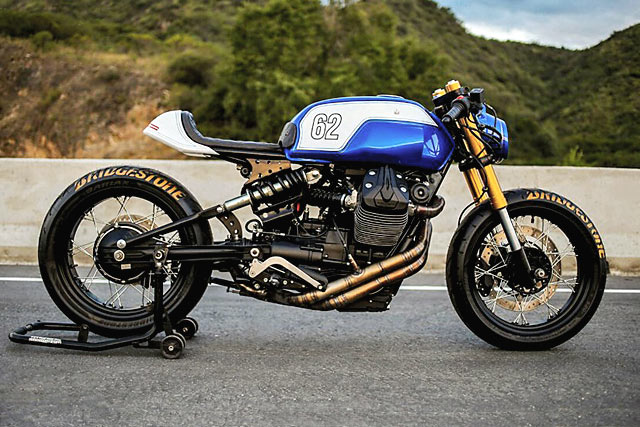 Buying a brand new motorcycle is a big decision for anyone. But to then hand it over with zero mileage on the clock to be chopped up for modification means you’ve gotta ask yourself one question: “Do you feel lucky?” Well, do ya, punk? With a resounding ‘yes,’ Motoplex of Argentina – importers to the country of new Italian motorcycles – avoided the shot and were simply blown away. They’d made just the right call and handed the keys of a new Moto Guzzi V7 III Stone to Lucas Layum and the crew at Lucky Customs who picked the path and delivered a brawny V7 Cafe Racer. For Motoplex the decision to allow one of their own bikes to be cut up was not only a risk for the machine itself but the end result would reflect on their company image. So they couldn’t just turn to any old shop, but Lucky Customs more than has the runs on the board and Lucas had no fear when it came to attacking a new bike for a big time client. The moment the V7 was up on one of the workshop lifts it was completely stripped down to determine exactly what was possibly and the direction the crew would take. Immediately they settled on the fact that to make a significant transformation of the Guzzi they’d need to change the racer’s suspension front and rear. They wanted to go big and no further work would progress until the bare rolling chassis was exactly the way Lucas wanted it. The front end was the easier of the two to tackle with the stock 40mm right way up units ditched in favour of gold anodised USD forks. An adaptor was made for the lower leg so the stock Brembo caliper could be used and cleverly, despite the change the ABS remains. Out back it was a whole different story with trial and error proving to the team that keeping the twin shock setup would never deliver what they were after. Both the factory swingarm and subframe were removed and the angle grinder spun into action to cut away all the unwanted metal. Then using a system similar to that found on some Kawasaki models the main frame was reinforced to accept one end of the new side mounted mono-shock setup. At the other end the original shock mounting points were used to fix the new swingarm cage, with plenty of testing ’till the geometry was spot on.

[superquote]“Trial and error proved to the team that keeping the twin shock setup would never deliver what they were after.”[/superquote] Before the V7 cafe could come off the lift the rolling stock had to be sorted and the intention had always been on giving the bike a tougher look. The factory V7 Stone mags were ditched and the combination starts with new Guzzi hubs laced with stainless spokes to wider alloy rims front and rear. This allows for the 100 front and 130 rear tyres to swell to 120 and a meaty 160 section out the back from Bridgestone’s Battlax range.

Down on the floor and Lucas could begin to envisage the way he wanted the metal work to best continue the beefy theme. At the rear with the subframe already cut back for the new suspension setup a small cafe racer-style tailpiece was hand formed to show off plenty of tyre. A recess was cut in that allows an LED tail light strip to be frenched in. While the metal continues to wrap under the subframe to provide a neat space to store some of the modern bikes many electrics. The alloy seat base was lightly padded before being wrapped in diamond stitched leather, a theme that extends onto the tank. That fuel tank is in fact the stock item but has been heavily modified with inspiration drawn from the entire Moto Guzzi V line up. The brawny sides were cut back with hand fabricated vents welded over the top now extending out over the valve covers. The back section of the tank was smoothed out to fill some of the lines that are normally taken up by the stock seat. With the final touch the hidden mounts for the small but signature Lucky Customs badging. The headlight surround runs with the air vent style, the custom housing adding a futuristic touch to the factory’s vintage version.

Powering the cafe fun is of course a beautiful Moto Guzzi V-Twin with 744cc of cubic capacity and smooth linear torque. It’s not the most powerful engine so to add some extra ponies the airbox has been simplified and a single foam filter added. But its the exhaust that makes the splash, a stunning hand fabricated stainless steel system that wraps around the engine and vents inconspicuously out to the left side under the swingarm. Finally to give the engine the Lucky touch it was sprayed in a gloss black and the cooling fins meticulously polished. Last but not least is the area in which Lucas takes great pride, stripping the bike back for a meticulous final assembly that allows the tins to be painted without the risk they’ll be damaged from further work. The dominant colour is blue but three separate hues are used along with gold and ivory-white to create the final finish. To wrap it all up the race number 62 was applied that symbolises the number of custom builds the shop has turned out. With more than half a century of killer creations under their belt it was really no risk for Motoplex after all and the result is one very Lucky V7 cafe racer to call their own.