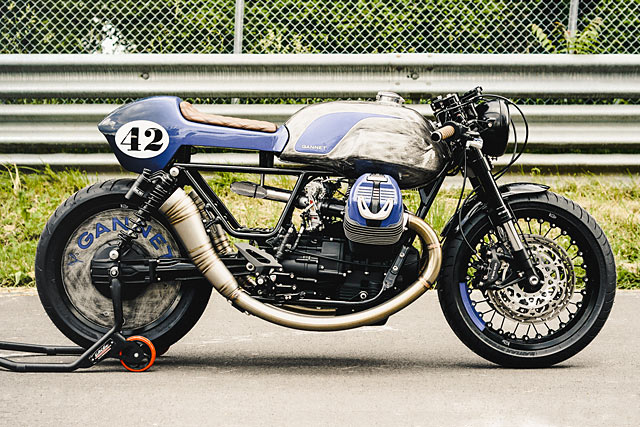 Moto Guzzi’s V9 Roamer is an interesting exercise in motorcycle marketing. Most manufacturers would have taken the approach whereby a ‘standard’ model is released (think the V7II Special or there abouts) and then followed it up with more ‘niche’ models like a scrambler, racer and the like. But not Moto Guzzi. Throwing convention to the wind – or possibly into their famous Mandello wind tunnel – they launched their new V9 range with their ‘Bobber’ and ‘Roamer’ models. Looking for a cafe’d version? Well, you’d be completely out of luck if it weren’t for Switzerland’s Gannet Design and Fuhrer Moto. The bike was designed and built by Ulfert Janssen from Gannet Design and Stefan Fuhrer from Fuhrer Moto. But Fuhrer’s claims to fame go way back; he was the former racing mechanic of Dominique Aegerter (now racing in Moto2) and Tom Lüthi (now racing in MotoGP). Now Stefan adds his racing know-how, precise engineering skills and his team of artisans to the usual Gannet creative shenanigans. In fact Ulfert‘s design studio and Stefan’s workshop are just 100 metres apart, so it is a perfect set up to ensure that Ulf’s creative prowess is accurately translated into Stefan’s slick metal handiwork. The project started with some loose sketches by Ulfert to find the best way to morph the Roamer’s proportions into a forward leaning, racer look. “Firstly, I worked on the stance and changed the frame angle from slanted backward into something more forward leaning,” says Ulf. “I cleaned up the architecture and ditched all the unnecessary parts. Then I designed a new retro racing tail section and a new exhaust system with a signature swoosh. Once the overall direction was settled, I made detailed design renderings which we used as the base for the building process.” Next, Ulf modelled the racer’s new tail section out of a hard foam to find the perfect proportions; it was then used as a template for the real metal work that followed. “The entire tail section was shaped and hammered out of aluminium by hand. A new rear subframe now supports the fresh seat and cowl in an elevated position for a more race-friendly configuration. “Our aim was to integrate the technical requirements and engineering goals without affecting the design concept,” says Stefan. ”The conversion of the fuel injection back to the carburettors was a challenge; the electronics, ignition and especially the sensors all had to be worked on and fitted, or removed, where necessary.” The paint is a rare mixture of “scrubbed” and high gloss shine, with a thick layer of clear coat, blurring perceptions and giving the rugged and scruffy metal a very smooth appearance. The tail section is painted in a soft gradation of blue and the cylinder heads were given a similar touch. The lower part of the main frame was made from scratch, cleaned up and then finished off with footrests by CNC Racing – a MotoGP supplier. To match this, the gear shifter was also modified and adapted to fit the Moto Guzzi’s new setup.

[superquote]“The paint is a rare mixture of ‘scrubbed’ and high gloss shine, with a thick layer of clear coat.”[/superquote]

The front fender was shortened and equipped with a new mount to fit the Öhlins forks. “For the clip-ons we were sponsored by ABM Fahrzeugtechnik, who equipped us with their ’bars and some beautiful Synto Evo brake and clutch levers. The all-black control buttons from Jetprime give a real menacing look to the bike’s details.” All the Guzzi’s electricals are by Motogadget, including their m-lock, m-blaze and m-unit components. The 18″ front spoked wheel was specially made by Kineo; the rear is also a Kineo item, now hidden behind the custom aluminum covers. And bounce is provided by two Öhlins Blackline rear shocks. “Although the bike is from 2016, we went ‘back to our roots’ and provided it with some old-school respiration via two Keihin carburettors. These will give the bike the necessary boost for any sprint races we might find ourselves in, while also giving it a little nostalgic flair. Directing the airflow to the carbs are two specially made, and racing-inspired, air intake tubes.” And the pronounced sweep of the exhaust gives the bike a strong visual impact and enhances the ‘fast forward dynamic’ of its lines, even at a stand still.” They were bent, welded and finally blended into two Leo Vince GP Pro trumpets.

“What I like best about this custom build is the coherence of the whole bike,” concludes Stefan. “There’s a really smooth transition from the front to the rear of the bike and your eye moves cleanly from one component to the next. It was important for me and Ulfert to place and adapt the individual components in such a way that they give a very coherent overall picture.” Ulfert’s final thoughts address the racer’s beautiful simplicity. “What’s special about this conversion is that it’s a minimalist design at first glance, but look closely and you can see many custom parts and special details. These remain discreetly in the background to give a strong first impression. However if you take the time, you’ll discover the sophistication in its details.”