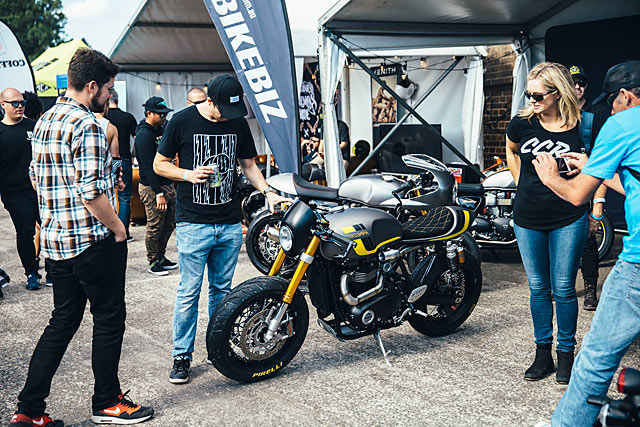 The Throttle Roll bike show and street party marked its fifth birthday in 2017, and it patently obvious that the show’s still got a full head of steam behind it. It had more of everything this year: better bikes, better food, better vibes and pretty much the perfect weather. It’s embarrassing to admit it, but having covered the show like clockwork for the past four years, we’re now running out of superlatives to praise the damn thing. So let’s just say that without a doubt, this show is again the best bike-related gig in Australia.

With bike builds from some of Australia’s biggest and best, the only excuse anyone could have for not seeing a bike they liked would have to involve some form of chrome-induced blindness. Our personal highlights include not one, not two, but three Wenley Andrews’ bikes on display, including his latest ‘Phantom’ Triumph Thruxton R. Then there was DNA’s amazing Moriwaki Kawasaki alongside their brand new XV Tracker, plus a whole heap more.

Our biggest issue with last year’s show was that the huge crowds made getting a bite to eat a little too much like reading War and Peace while starving. But not so this year, as more food trucks with more staff meant burgers and beers were available at (almost) a moment’s notice.

And on a personal note, I’d just like to say that the burger I had while I was there was one of the best I’ve ever tasted. Praise be to Mary’s of Newtown. Our highly trained Stunt Mouths reported similarly pleasing tastes from their food truck neighbours, too. And in a Pipeburn News exclusive, we’ve got the green light to reveal that plans are afoot for the show to make an appearance in Los Angeles in 2018. While it’s still early days, Throttle Roll’s main man Mark Hawwa (the beardy bugger behind Sydney Cafe Racers and The Distinguished Gentleman’s Ride) says he’s been thinking about it for quite a while.

“We want to celebrate a year of bike builds, friendships and the progression of the custom bike scene,” says Mark. “Throttle Roll isn’t just a motorcycle show, it’s a celebration of all things two wheels. And with so many friends in LA urging me on, I just thought fuck it, let’s party.” If it does go ahead, take it from us – this is one show you won’t want to miss out on.