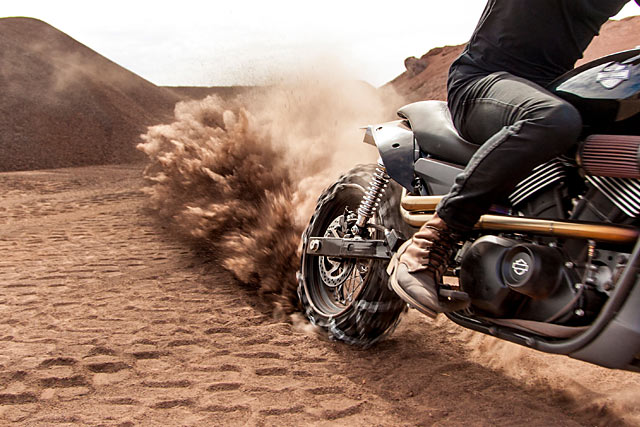 During our recent trip to Australia’s Broken Hill on Triumph’s Bobber, we were lucky enough to be able to work with Dean Walters, a local Melbourne photographer who seems to have quite the knack with cameras and motorcycles. We got to spend the week with him while bashing around the Aussie desert and trying not to crash bikes we didn’t own. After seeing him in action, we can say that the guy’s definitely ‘got the gift’. Watching him turn two idiots messing around in the dirt into jaw-dropping shots was a sheer pleasure to behold. So we asked him to give us his best photos and a quick interview; this is what we got. Can you introduce yourself?
My name’s Dean Walters. I’m a photographer living in Melbourne, Australia. I’ve been shooting professionally for about seven years. I started by messing with my dad’s 35mm film cameras around 2000 or so. He had some semi-pro lenses, including 300mm and 500mm telephotos. I was surfing heaps at the time while I was living in Queensland and on the New South Wales Central Coast, so I started to shoot my mates from the beach. Then I started shooting motorbikes seriously about two years ago and I registered my own company called ‘Luci Luci’ with my mate Lee, who’s a cinematographer.

Of all the things you could photograph, you chose motos. Why?
I went to Indonesia in 2015 and got all my gear stolen, so I kind of stopped shooting surf stuff then. But the simple answer is that bikes flick my hair back. They float my boat. But it wasn’t planned at all. I’m a bit of a wanderer and I guess I’ve kind of fallen into motorbikes. I’ve always shot what I like to do; whatever I’m into at the time. It’s much easier to shoot things that you enjoy and have a passion for. I’d never shoot weddings or products because I just wouldn’t enjoy it. Do you shoot any other subject matter?
Currently I’m shooting about 99% moto, but I do some fashion and studio stuff every now and then. Two or three years ago it was pretty much the exact opposite, but I was really starting to feel that I was stuck indoors. Actually, I still do a little surf stuff for friends. I also love to get out into the bush with mates and we try as hard as we can to get lost and bogged, so there’s always time for photos. We’re completely nude as well…

What’s your go-to camera and lens?
I went digital in 2010 after my Missus got me a 5D. It’s much cheaper than film, but then again you need a $3000 laptop to work on the shots. At the moment, my main camera is a Canon 1D X MKII and my most used lens is probably my 700-200mm f2.8. Most of the jobs I do now-a-days are done in full daylight (or what I like to call gentleman’s hours) so I’m not having to use fast prime lenses that much.

I also like the way a telephoto lens treats backgrounds and pulls them forward, especially for the stuff I shoot. Recently I’ve been looking at a mirrorless Hasselblad, but they cost a bomb and I’d be worried I’d break it. I’m not the kind of photographer who treats his gear with respect. If my camera was my wife, I’d probably be in jail right now.

What’s the best and worst things about shooting bikes?
The best thing is hanging around with skilled riders who can go like legends. Guys who can really send it, you know? I like guys who can show me how much better at riding they are than me. Guys with ridiculous skills. I personally have no ambition to be an amazing rider, but to see them riding like freaks is great. I’m not much of a thinker, by the way. I’m more of a do-er. My motto is don’t overthink anything ever. They’re words to live by. The worse thing about shooting bikes is that I’m often shooting ones that cost a bomb and riders on a $30k bike ride like absolute crap. Riders on a $500 bike go nuts and that’s when you get the best shots. [superquote]“I’m not much of a thinker, by the way. I’m more of a do-er. My motto is don’t overthink anything ever”.[/superquote]

Where do you see yourself in five years’ time?
I really want to grow my company. I want to build it and get more work in, along with a young team with really fresh ideas. I like the idea of nurturing some new talent. And when I say ‘more work’, I mean more creative work. Advertising. Fashion. Whatever. As long as it’s new and different.

What’s you’re favourite bike from the past few years?
That would have to be my Suzuki TS185 chopper from Engineered to Slide (see photos 3 & 5 above). It’s completely and utterly shit, but so much fun. It’s chopper pretty. Bogan Pretty. Scumbag pretty. It was originally an ag bike that was gifted to me. Then it became a scrambler with surfboard rack attached. Then it was a submarine – meaning me and some friends rode it into a flooded 4WD track and cooked the engine. Then it sat in the Engineered to Slide shed for ages. Then Nigel from Engineered to Slide just decided to rebuild it overnight – literally overnight – for an Aussie bike show. It’s got chopper forks, rigid rear and a suicide shift. Tell us about your Land Rover.
My Landie is the love of my life. It’s an ex-Aussie Army ’91 110. It’s Australian made, but with an Isuzu motor, which I guess was part of the Mil Spec order. The chassis is Aussie-made, too. I bought it at auction with 80k on the clock. All I’ve really done is pulled out the rifle rack and put in a baby seat. I’ve just spent a heap on a new diff and transfer case after fanging it hard off-road. It’s actually my family car, too. Right now I’m looking for a five door one. I take it to the bush a few times a week with my kid. It’s really agricultural to drive – like an old tractor. I like to say that life’s too short to drive a boring car. Before this I used to drive old crappy Holdens from the ‘60s and ‘70s.