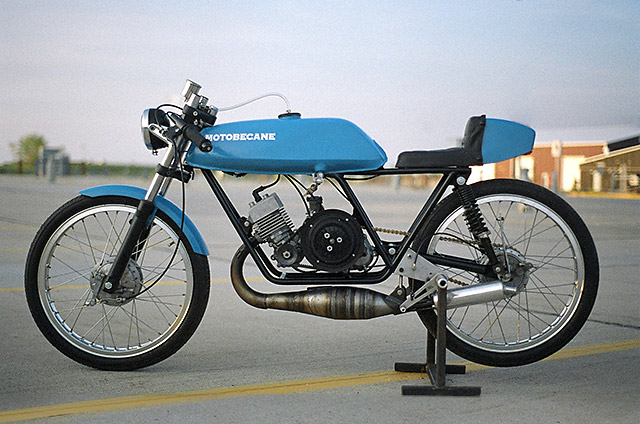 It’s no secret we love mopeds. But having said that, it’s been a long time between drinks for us, ‘ped-wise. Nine months, to be precise. Are we embarrassed that we haven’t done more to support our be-pedalled brethren? A little, but where here tonight to set things right. And how. Here’s one of the best-looking mopeds we’ve seen since the Janus Paragon. Meet “Moby 5” and her proud maker, Craig Dueck. “Hello! My name is Craig Dueck. I am from Winnipeg, Canada. I have been building and riding mopeds for the past 10 years. This is my first scratch build. I call it ‘moby 5’. The original concept was to be a typical moped build, until an ultra-rare Motobecane D75 5-speed gearbox was found. I paired the transmission with a Motobecane 50cc AV10 engine I originally had in mind, keeping the classic ‘belted primary’ look of a Mobylette moped.” “I started things off by building the cradle frame to house the gearbox and engine. Using a slightly modified pipe bender and 20 feet of wasted tube, I finally got the bends I wanted. A simple image that had been drawn in Photoshop was blown up to life-size as a template, but many alterations were made and in the end I just kind of went with it. I got lucky when I mocked up the motor, transmission, and rear wheel; I ended up having just enough room for the exhaust header to sneak through the narrow down tubes.” “The Puch Monza rear sprocket was flipped and bolted to a 60’s Sparta hub for a tighter chain clearance to the front sprocket. Having been my first scratch-build bike, I was more than happy with the geometry and function of all the components working together.” “The bike’s style is definitely an ode to classic 50cc racing, in which Motobecane never actually had a 50cc GP racer. I wanted it to look like a factory racer that had been inspired by a D55, but with aesthetics of a moped. I tried using as many Motobecane moped parts as I could, starting with the swingarm. I needed a system to tension the belt and found a single engine torsion spring from a Moby that was perfect with a little tweaking. The primary pulley is off a 60’s Mobylette AV3 which was tapered and cut to size. “Many prototyped parts were replaced as the right replacement was found. A set of NOS Tommaselli levers for a set of Indigan clip on bars. Some 18″ Zundapp aluminum rims to replace the 19″ set I originally had on. The slim Heidenau tires were sourced from Belgium, 18 x 2 up front and 2.25 in the rear. Some Loaded Gun Custom rear sets. And a pair of Tomos EBR forged aluminum spring forks to keep it nice and light up front.” “I can’t thank the Briton Bees enough for supplying the D75 transmission. A single, crucial part goes a long way for a good start to a build. Cheers!”