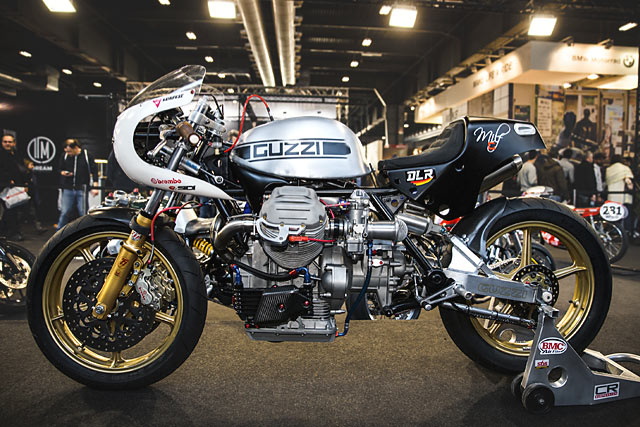 After you’ve been to more than your fair share of bike shows, it’s easy to become a little jaded about the whole shebang. Too many people, too few cool bikes, greasy food and those early evening hangovers that only one too many midday beers can give you. I thought I’d really seen it all. But within 30 minutes of arriving at the 2018 Moto Bike Expo in Verona, I was rethinking my convictions quicker than a televangelist at a jelly wrestling contest. There is a better way – and I think MBE has found it. Here’s how. Being an East Coast Aussie, my bike show yardstick is set by the local Sydney motorcycle show, which alternates between Sydney and Melbourne. 2017 was Sydney’s turn, and little had changed since the last show. Take one aircraft hanger-sized space, add a whole bunch of factory bikes you’ve usually seen before and add way too many people. Of course, it’s probably the same in your neck of the woods as well. Just barely acceptable if stock bikes light your fuse – and really lacking if quality customs are your thing. To say that MBE was a little different to that ilk of bike show would be like saying that your childhood Lego houses were a little different to Frank Lloyd Wright’s Fallingwater. Spread over an inconceivably large amount of space, the show would easily be eight times larger than any show I’d ever been to before. And here’s the best bit; each one of it’s seven (yes, SEVEN) hanger-sized halls is curated to appeal to different tastes. As you can see below, the inaugural Pipeburn MBE stand was located in the Cafe Racer hall. But for those who’s buttons are pushed by other genres a multitude of MotoGP, bobber and billet tastes were also accounted for.

Luminaries in the same hall as us included Walzwerk, Officine Rossopuro, BottPower and the always fun Sultans of Sprint. And the Pipeburn stand itself included the cream of the European custom crop including the UK’s Sinroja, Austria’s Titan and Vagabund, Switzerland’s VTR and Young Guns, and Italy’s Plan B. To say we were in good company would be a gross understatement. Hell, when you find yourself casually chatting to Winston Yeh, Zack Ness and Go ‘Brat Style’ Takemine without batting an eyelid, you know something very cool’s up.

And with such a large amount of space, the admittedly enormous crowds still managed to feel OK thanks to their ability to spread out. With that said, there was still a few crazy busy moments on Saturday that reminded us just how popular the show has become. Verona’s proximity to Austria, Germany, Switzerland and France means for a large chunk of central Europe’s bike lovers, the show is a a mere day’s ride away.

[superquote]“I worked my way through the food trucks like a SWAT team clearing a building, and there wasn’t a dud meal amongst them.”[/superquote]

And while there isn’t much us mortals can do about lunchtime beers resulting in afternoon headaches, the food was typically Italian both in its quality and diversity. I make no secret of the fact I’m a bit of a food freak, and to be able to see sweet bikes while not gagging on stale hotdogs or crap, greasy burgers was like heaven. I worked my way through the food trucks like a SWAT team clearing a building, and there wasn’t a dud meal amongst them. Thank you Mother Italy.

Nights on the town seemed to invariably lead to the famous Mr Martini’s bar and showroom. Thanks to The Sinroja boys and crazy Ben Saggers from Headon Helmets for their wildly inappropriate company and ludicrous dance moves. I’m not really sure why the Italians love AC/DC so much, but us Aussies will never turn down a chance to drunkenly scream the lyrics from ‘Highway to Hell’, and it would seem that this behaviour – unlike most other countries in the world – impresses the Italians no end. Or at least that’s how I remember it after all those complimentary drinks… Should you find yourself in central Europe next January and in need of a custom moto fix, you could do a lot worse than spend a day or four at MBE. While Milan’s EICMA does get a lot of press for its new factory bike reveals, those of us who prefer our rides a little less generic will feel much more at home in Verona. Why not drop by in 2019 and say hi?