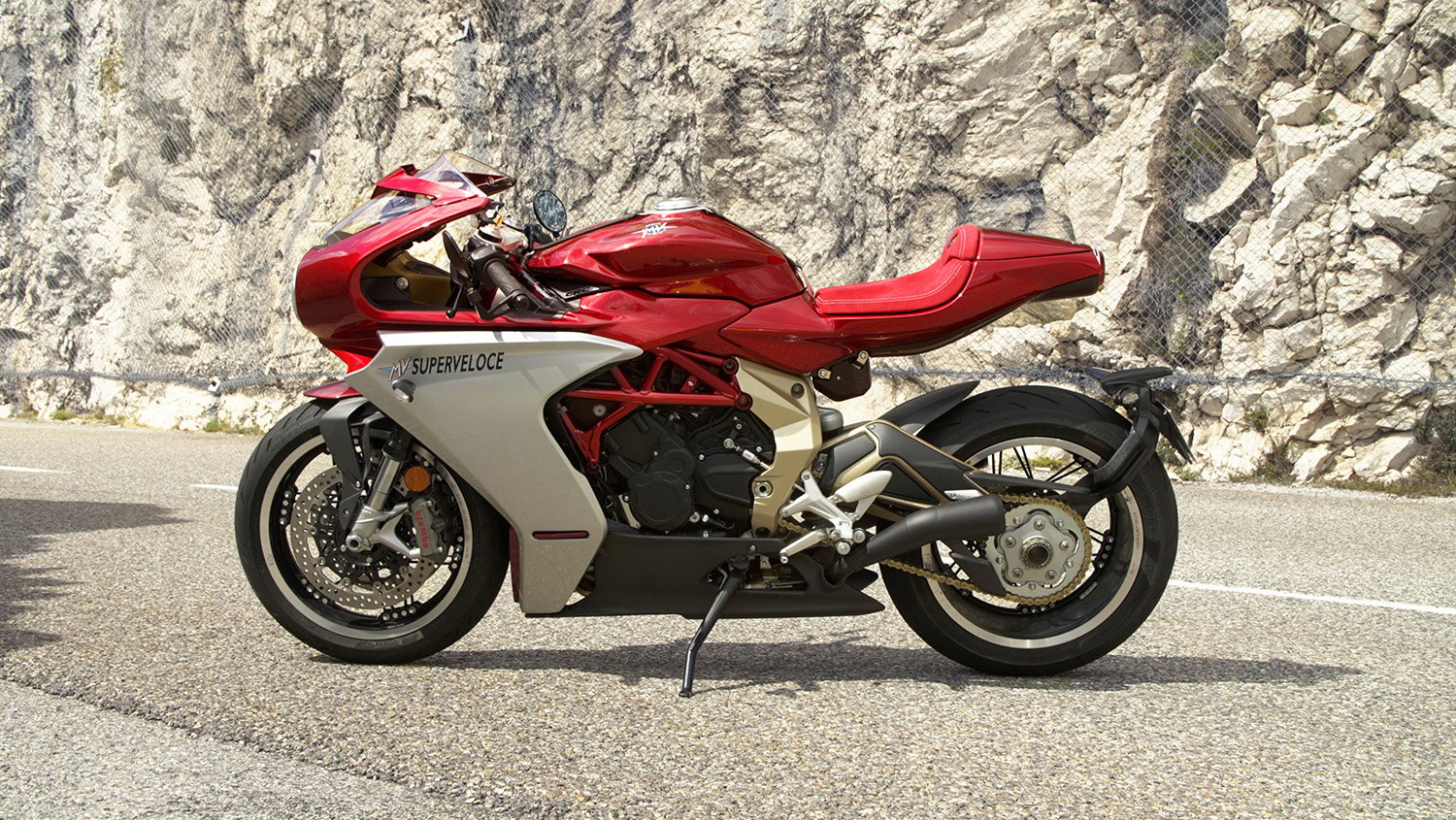 The MV and I met on a busy street in Monaco at the beginning of June and ever since then it has been a story of butterflies in the tummy and puppy dog eyes. My phone is brimming with photos of her and I can’t stop posting them on instagram with cute comments that people with faltering relationships find awkward to read. I want all the world to know just how special she is, my status has been changed to “it’s complicated,” but I’ve so far resisted the urge to update my profile picture. Whenever I start talking about her I can hear a communal sigh of boredom from my entourage “here we go again” they say with rolling eyes, nobody thinks it’ll last, “it’s just another fling, you’ll drop her as soon as the next good looking Italian comes along” they jeer with a mocking elbow in the ribs. Sometimes my phone autocorrects her name to Superlove and I blush. As a result my other bikes have become side bitches who jostle for my attention without much success, I’m blinkered by the sultry supermodel. Most days, the garage creaks open and there’s only ever one choice; the red and silver jewel from Varese that is always poised and ready to go, parked right in front of the door, never blocked in or on a paddock stand, she doesn’t even need to be plugged into a charger.

To say I’m absolutely besotted would be an understatement, I don’t think the dictionary has enough verbs to adequately describe just how amazing I think this bike is. The 800 triple is the same basic block as in my Brutale but it feels so much more tolerant, it’s silky smooth by comparison. The bike is by no means slow but the brutality of the former is gone, maybe due to the two dozen extra horsepower between my legs, the experience less frantic; the madness has been replaced by something that feels altogether more sophisticated. The throttle is light and responsive, there’s no hesitancy and much like other aspects of this bike you need merely think it for it to happen. Aurally the the open exhaust on the Oro starts as a growl which resonates around the streets and tunnels of Monaco, blending with the Italian exotica of the four wheeled variety, the song grows in volume as the revs rise but only loses composure above about 7000rpm at which point it loses its shit completely and becomes an ever more ferocious scream as it races for the 13,000 rpm red line. The frenetic blare is how I imagine a dragon gargling napalm might sound; intoxicating and terrifying.

Otherwise, the whole bike exudes total elegance, underway everything feels effortless; I’m not an out and out sports-bike rider, as such I’m often intimidated by aggressive handling or big horsepower so my first rides weren’t without a little trepidation. The inline three cylinder 798cc with dual overhead camshafts and titanium intake and exhaust valves kicks out about a hundred and fifty horsepower, the exact number wavers a little bit depending on the exhaust configuration. The F3 engine has been remapped and is more road biased, it feels easy to ride fast and is flattering, handling is nimble and sharp but never twitchy.

If I had to sum up the riding experience with one word it might be “intuitive,” where you look, it goes and does so without you even being fully aware of it. When I compare riding a big bore V Twin this is effortless and scalpel-like.

During the 2000’s Ducati made a couple of modern retro bikes, employing modern technique with vintage aesthetics, without belittling their achievements, the Bologna firm prioritised olde worlde appeal over performance, this is most certainly not the case with the Superveloce Oro. Based on the incredibly capable F3, the bike is so much more than a modern interpretation, it’s a bang up to date mid sized sports bike with cutting edge technology, wearing an incredibly chic pencil skirt designed by Christian Dior but CNC’d from carbon fibre and titanium. The riding position is less aggressive than the F3, as is the engine mapping, the onboard gubbins are so cutting edge I haven’t quite worked them out, it even has cruise control, though I’m not sure why.

In 1999 MV Agusta released the F4 750 Oro, designed by Tamburini, the Ta of Bimota, the same hand that drew the fabled 916. The resulting masterpiece is considered a holy grail bike of tremendous importance, which heralded the rebirth of MV as we now know it. The company is echoing this tradition with the Superveloce Oro, which is also a limited edition of 300 units, this one is number 53. In 2000 the standard F4 750 was released and ultimately the motore grosso 1000cc iteration a year later. The “normal” Superveloce is already globally available in a couple of super sexy colour schemes . Rest assured, it’ll be anything but normal and you’ll certainly feel pretty special if you have one in your lineup.

Considering that this is a factory bike, rather than a one-off that has been hand crafted in an individual’s workshop the details are utterly exquisite and tactile. Sitting on the bike there’s plenty of eye candy; a leather strap runs the length of the tank and the fuel filler cap that initially twists around its own off-centred axis and then around its thread is incredibly pleasing, perhaps not everyone’s cup of tea but I love the bar end mirrors and they work better than most sport bike mirrors that require you to contort your body or lift an elbow to catch a glimpse of what’s behind you.

I’m also a big fan of asymmetry so the two on one side and one on the other side exhaust system is right up my street. The spoked wheels are things of beauty that don’t relegate performance, the tail that tapers perfectly to a round light, the fairing sleek, the tank muscular, an elaborate blend that works from all angles. Aesthetically it’s a symphony.

It’s one of the few bikes that people who aren’t even into bikes can’t help but notice; last week after battling traffic in Cannes I smiled as car geek paparazzi clamoured around the parked bike.

Something else that’s worth mentioning to the uninitiated is that MV Agusta can’t rightfully be compared to Ducati, with only a hundred or so employees it’s a micro-enterprise, a fraction of the size of its big red rival down the road. Making achievements such as the Superveloce all the more impressive.

As we approach our three monthiversary we are also closing in on another milestone, the first service at 1000km, I know it will be just a quick oil change and health check but I’ll be waiting nervously outside hoping everything’ll be ok.

Towards the end of a ride, I accidentally on purpose miss turnings, prolonging the inevitable misery of putting her back in the garage! Sometimes, especially after a spirited ride, I close the roller shutter glad to have made it home in one piece, or at least not to have made any potentially life threatening mistakes but in this case, as darkness descends on the dormitory that is my garage a ball of anxiety rises in my stomach; what’s the next excuse I need to tell my wife to go for another blast on my MV Agusta Superveloce Oro.