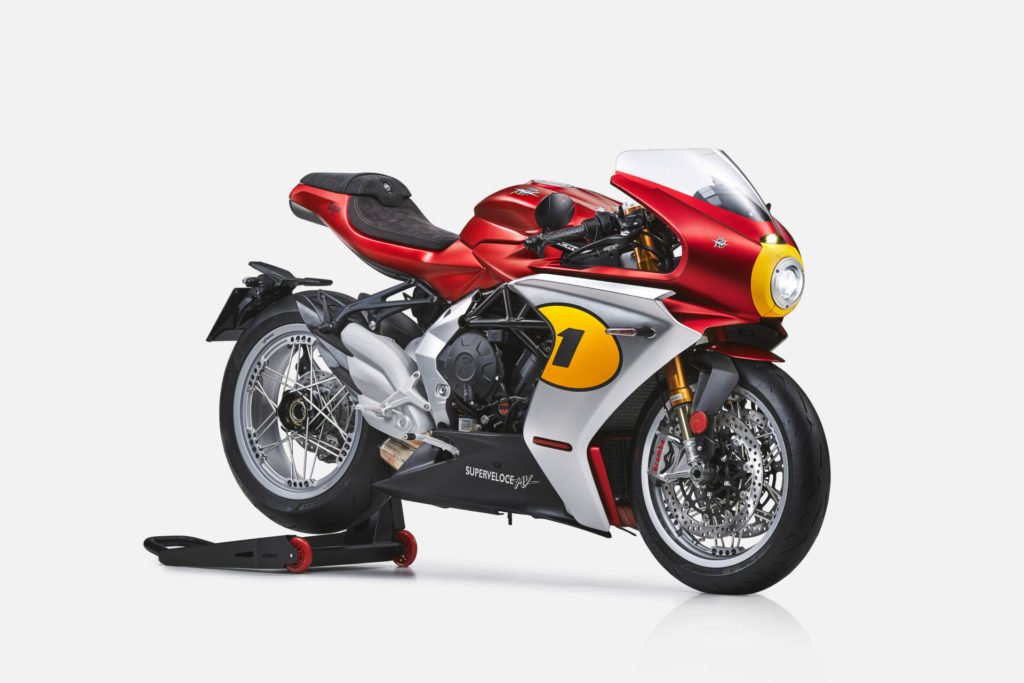 It was one hell of a weekend on track at the Misano World Circuit Marco Simoncelli, crashes galore, seasons thrown down the road with poor tyre selection, Marquez taking the chequered flag and one very happy Quartararo claiming the title. But as MR VR46 said goodbye to his adoring fans, the original Italian superstar of Grand Prix racing was unveiling the latest creation to bear his name. And oh boy is it beautiful, the 2022 MV Agusta Superveloce Ago pays tribute to the great Giacomo Agostini, but it’s more than just a cosmetic makeover. As the 79-year-old legend showed himself, twist the throttle and this machine has all the go to match its show.

This is not the first time a production model MV Agusta has worn the Ago name, but the Superveloce is an already special beast, so taking it to the next level makes this a truly remarkable creation in the company’s illustrious history. So why is Ago so beloved, well when the great Mike ‘the bike’ Hailwood left MV racing, Ago was promoted to the top position in the Italian team. And he didn’t let his countrymen down, winning the 500cc title seven years in succession and doing the same in the 350cc class. He also won the iconic Isle of Man TT ten times and dominated the Ulster GP for a period, something no other non-Anglophonic rider has ever come close to achieving.

So to build a limited production machine deserving of such acclaim, MV start with their Agusta Superveloce, a retro racer that combines the best of old and new, and then threw everything but the kitchen sink at it. Only 311 examples will be made, the first 15 are even more special as they are dedicated to Ago’s 15 world championships. But the remaining bikes are just as special and are being offered online via the company’s website for €32,100. The run of 311 is said to celebrate Ago’s number of GP wins, the problem is he won 122 races in his GP career. So perhaps they are counting all his career wins on two-wheels, although that hasn’t stopped many publications from mistakenly crediting the famous Italian with 311 GP wins.

So, you log onto the MV website, max out your credit card and wait for the call, what exactly arrives at your door? First to strike the eye is the incredible colour scheme that has been flowed over the already stunning Superveloce bodywork. The matte Fire Red, Magnum Silver and Yellow are exclusive to the Ago and you also get paint matching grips, because Red is Giacomo’s favourite colour. There is also a leather tank strap, with a carbon fibre numbered emblem hovering over the filler cap and a special box to put it in when you’re not riding.

There is plenty of carbon fibre too, with the swingarm protector, chainguard, under-seat cover, front and rear fenders and side coverings all made from the lightweight material. Throw your leg over all of this and you’ll be sitting on a special Alcantara seat with contrasting stitching and your boots protected by all-new alloy heel guards. The LED lighting gives an ultra-modern feel, but buffering is reduced by what MV describes as an ‘old school’ windshield. That itself hides an all-new 5.5in TFT dash, that once again stays true to the Superveloce ideal of matching the best of modern and classic.

Now that you’ve got the look, you need the performance to back it up, and riding alongside Simone Corsi on his Moto2 bike, Ago showed over the weekend that the machine that bears his name has plenty of poke. The fire breathing 798cc triple-cylinder engine uses a counter-rotating crankshaft and houses an all-new slipper clutch. Then to hot things up further, MV has developed a homologated race kit that includes an advanced ECU and an Arrow 3-exit exhaust system which is immediately recognisable by two silencers on the right side and one on the left.

The cornering ABS has also been given a tickle and now allows the bike to brake better on track, with its huge mono-block Brembo calipers. But it’s the suspension that lets you know how serious this whole project is about performance and usability on track. Ohlins sent over the very best, with fully adjustable Ohlins NIX inverted forks matched to a linkage-assisted fully adjustable Ohlins TTX piggyback reservoir rear shock.

How many owner’s of this special piece of motorcycling history will want to take it on the track is anyone’s guess. But should they do so, this remarkable factory creation will hold its own against anything, and Ago wouldn’t have it any other way.