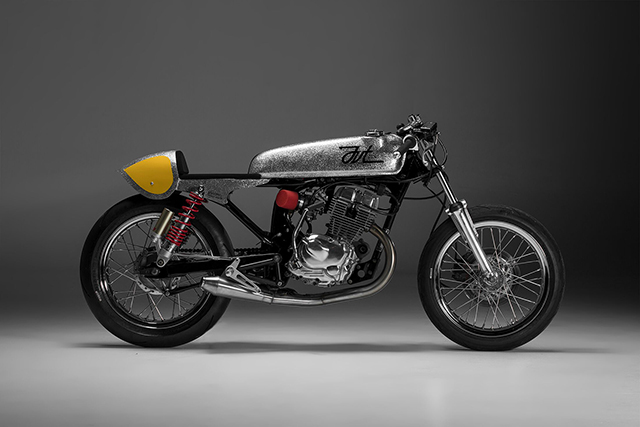 It’s frowned upon these days as we all get a little wiser, but the old saying ‘happy wife, happy life’ could well be put to the test as Francesco was supposed to build this bike into a road-going cafe racer for his one true love! But somewhere along the way this 1990 Honda CD250U became a track bike for the man himself, with a more race orientated name, MotoLeggera, meaning Lightweight Motorcycle. Rescued from a Hippie on a Horse Farm the Honda commuter has undergone an epic transformation at Francis Von Tuto Moto Works and now tears up the tarmac at Australia’s Lakeside International Raceway. 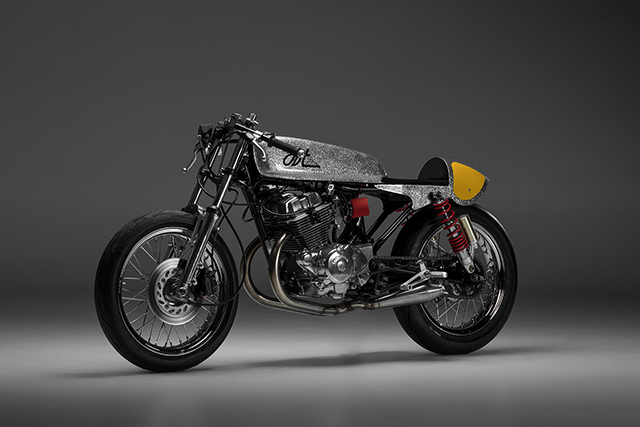 The simple little Honda came to Francesco in the hardest of ways, with more than 1000kms driven in two attempts to pick up the bike and get it back to Brisbane. The first time the GPS lost signal halfway, while on the return trip “I had to cross a creek and when I found a massive mud puddle I knew I would never get out of it, I decided to park the van and run the last 2kms to get to the farm. Once I got the bike I rode it back to the van with no helmet and a flat tire, then loaded it up and back to Brisbane.” 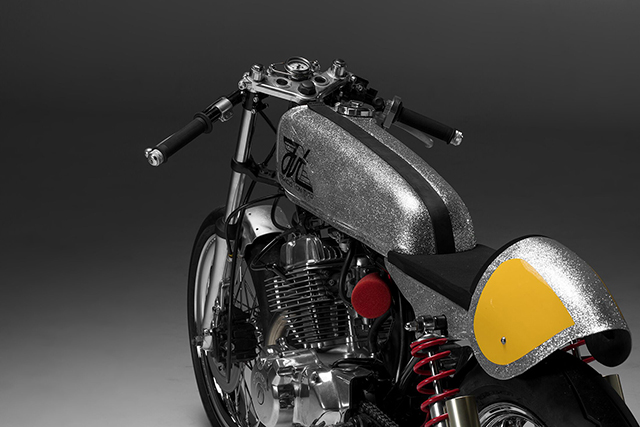 The van overheated several times on the return journey and it took more than 7hrs to get home. So what did Francesco have for his time and money? A true farm bike, smoke from the dinged up pipes, broken and sun-blasted plastics, bent rims and a horse chewed seat. But being a “bulletproof air-cooled 250cc parallel twin, a very narrow and simple frame, short wheelbase and factory 17 inch laced rims with front disc.” Francesco felt it was the perfect base to build a tribute to the sub 100kg Italian race bikes of the ’60s. 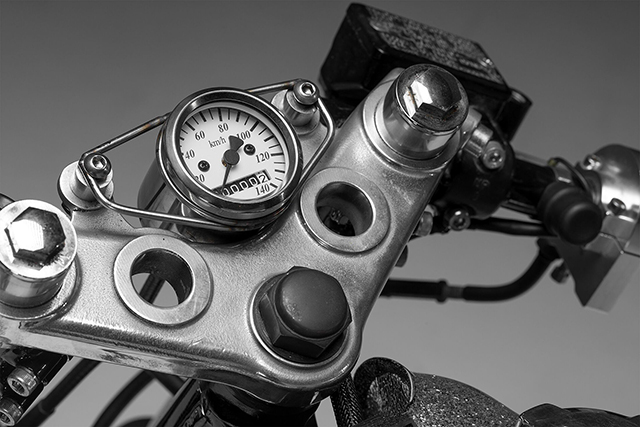 At 145kg the CD250 is a lightweight bike to begin with, so getting the figure below the ton is no easy task. But the best way is to start with a bare frame and only add what is absolutely essential, which is exactly what Francesco did, including grinding and cutting off any excess material from the frame. The wiring loom has been thinned out, with what remains strapped to the backbone to be hidden by the tank. While the battery is tucked away in a small custom tray nestled between the chassis and the swingarm. 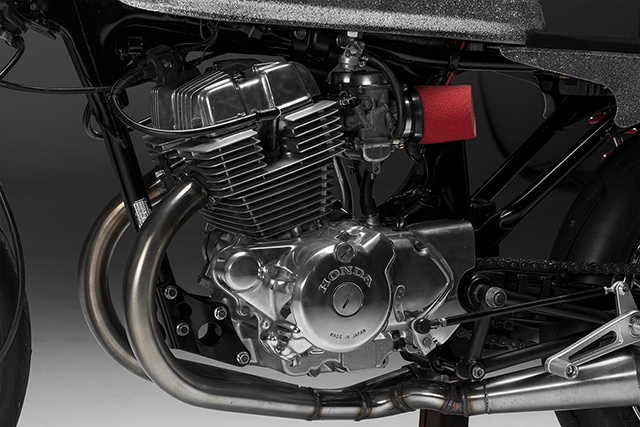 The bodywork is just what you’d desire when turning the little Honda into an even smaller Italian and the 9.2l ‘skinny’ fuel tank sets the stage. To match a brilliant aluminium tail was shaped up, with the number boards seamlessly integrated into the hump “The Ducati 450 desmo inspired Livery, a full metal flake silver,  is the work of Mr. Antonio Di Russo from Kustom Corner Australia. While the very classy laser printed black leather tank strap is 100% Aussie by the Port&Hide crew.” With the seat being nothing more than a 20mm neoprene foam pad that Francesco shaped to suit. 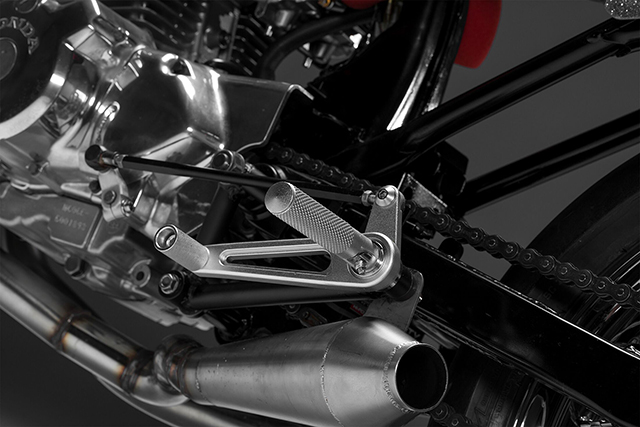 Next on the menu was an engine with more power and less weight and the 233cc donk has it all. Completely stripped and water blasted the head has been given a mild port job before being shaved to bump up compression. But before the assembly began parts from an older Honda 250 were sourced, with the clutch cover and kickstart adapted and the electrical start removed to lose some fat. Not an easy task but well worth the effort as the all-new genuine parts were pieced together, including new pistons, rings, timing chain, bearings, and seals. 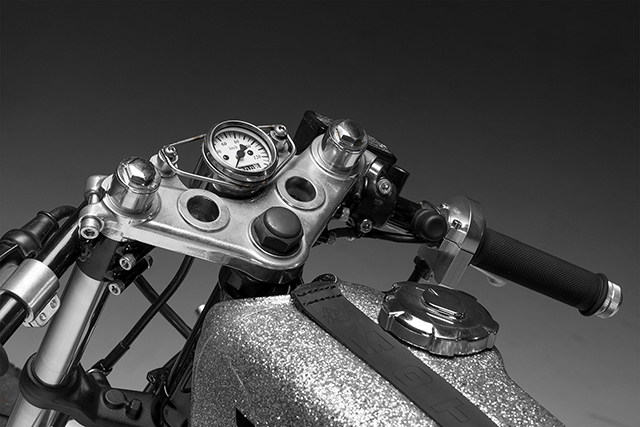 On the outside, the carbies have been rebuilt to suit the extra fuel requirements and jetted for the pod filters. While the exhaust system is the big-bore flaming spitting item you love to see on a racebike, although it was a slow process with the first shop employed returning nothing but a dog’s breakfast. But now the little Honda was breathing fire it was time to get it to handle and out back a pair of Showa shocks have been professionally rebuilt to suit. With the front forks given a full rebuild, a Teflon spacer turned on a lathe by the man himself and new viscosity oil. 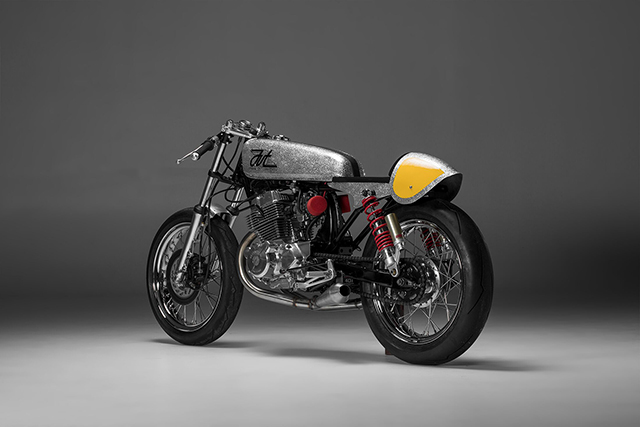 The donor bike that provided the kickstart had a drum brake, but it was decided beefing up the factory disc combo was the better way to go. While for wheels “I found a NOS set of aluminium DID smooth rims from japan which I’ve laced using stronger stainless steel spokes to the mirror-polished standard hubs,” Francesco explains. With clip-ons, a Euro set of rearsets and brackets made in house to make them fit to complete the racer build. Now tipping the scales at just 99.8kg, MotoLeggera is a mid-corner machine and having not been on track since 2007 at Mugello, how did the Francis Von Tuto Moto Works Honda fare at Lakeside in Francesco’s hands? It took home the “best bike of the day” award, not bad for her first time out! 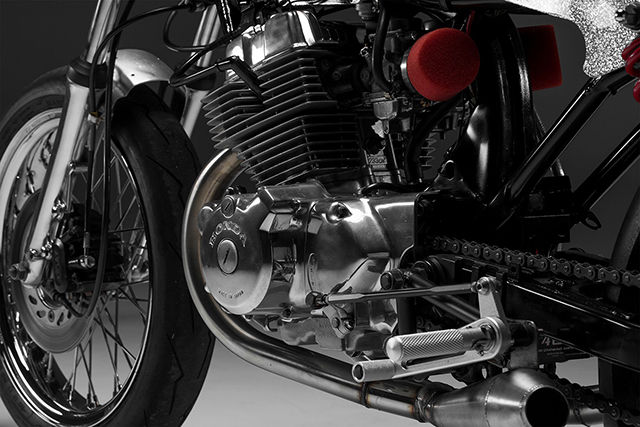 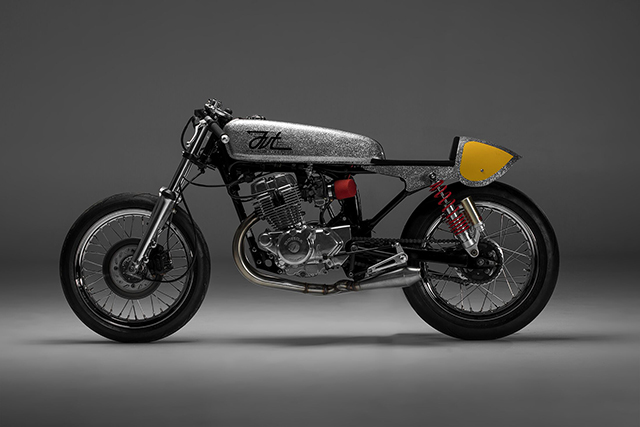 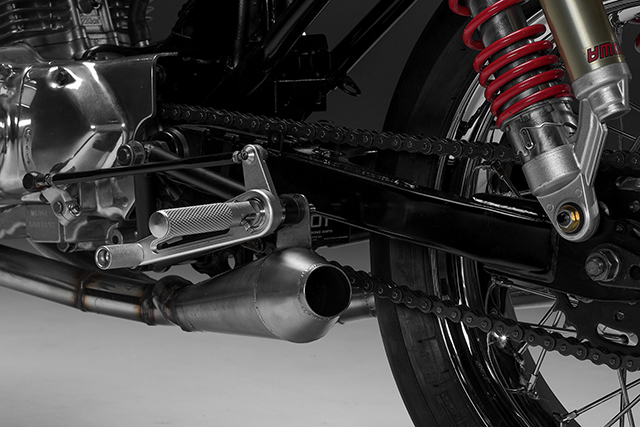 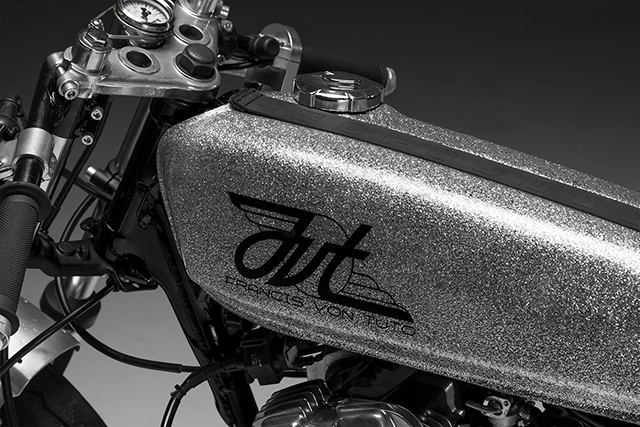 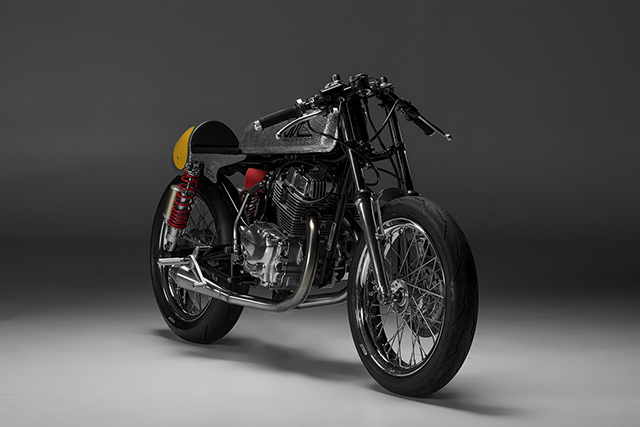 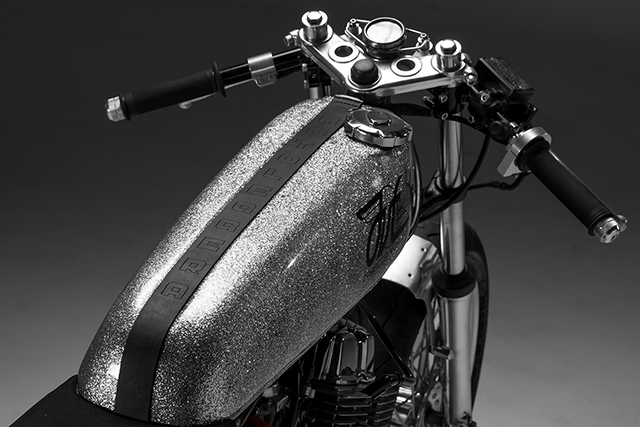 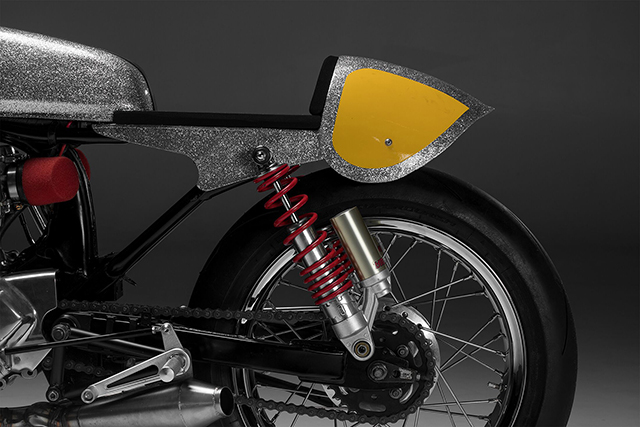 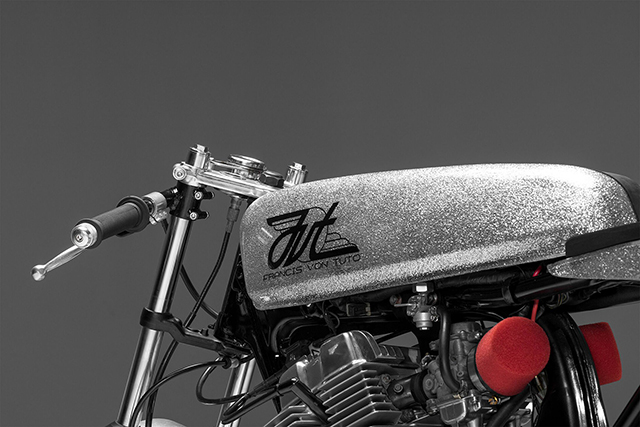 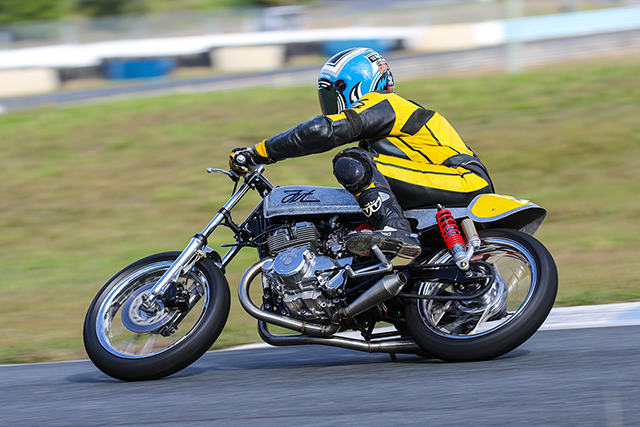 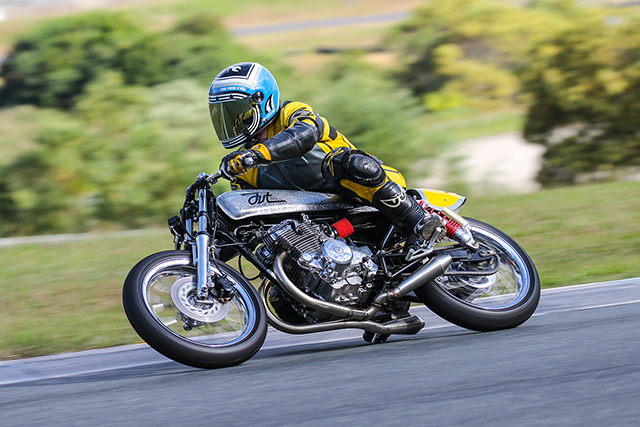