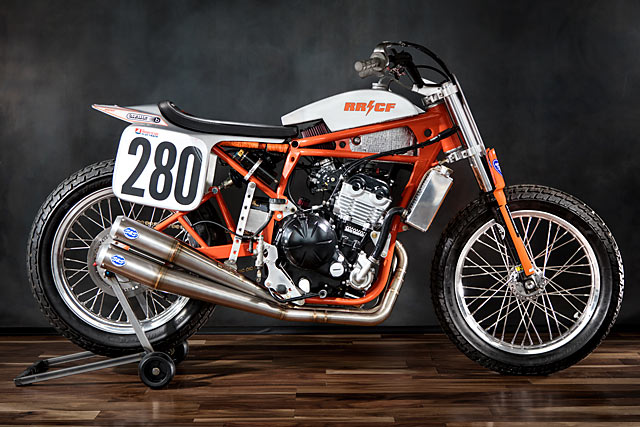 It’s 2017 and I find myself in a dilemma involving lack of time and money. Questioning how we would build our next custom as well as a new bike to race in the American Flat Track series, a decision was made to kill two birds with one stone. Why not build a custom worthy of the race track and a race bike worthy of being a custom piece of two-wheel art? Why not, indeed! Starting out with a fresh 650R powerplant, we had worked it over with all the neat little mods and do-dads from the fellas at Mach Modified, based in New York. Christian and Marco at Mach have a way of taking the stock 650R mill from a less-than-arm-jerking 67HP and pumping it upwards of triple digits. The internals to do this are no simple off-the-shelf parts. The majority of these one-off custom parts come from the likes of CP Carrillo, Mega Cycle and Kibblewhites. They are custom-built to Mach Modified’s top secret formulas, calculations and years of experience building some of the nastiest AMA Pro Road Race Bikes and Drag Bikes. I was looking to do something a little different from a traditional chassis. I wanted something that would offer a few more options with geometry, space for different air induction set ups, and a lower center of gravity. Wanting a good strength to weight ratio, we chose to go with a perimeter back bone frame out of the C&J camp led by famed frame builder Jeff Cole. The welds and bends of the chromoly tubing were pure art, with all brackets and holes lining up perfectly. Wanting to get the best handling and functioning suspension to take whatever the dirt or limestone cushion would throw at us on the track, we enlisted Max and Martin from Traxxion Dynamics suspension. They built us a shock and forks that would give us the proper rebound and compression adjustments. This would keep the wheels on the ground and provide a ride that would not beat a racer up and wear them down before the end of the grand 25 lap battle finale.

Martin took the Penske shock, disassembled it and built it up with his own custom valving and Traxxion Dynamic piston. We then supplied a set of Honda F4i forks that they applied their special works package on, which includes an AK-20 fork cartridge and special pre-load adjusters. Their suspension is totally smooth with very little stiction and it greatly improved our lap times and rider confidence. Max has been a technical wizard, casting his theory, teaching us and giving us sage-like directions on set-up. With a proper roller amongst us, it was time to go forward and address the essentials like the gas tank, brakes and wiring. With the perimeter frame, you’re not going to run a traditional-style fuel tank that sits over the backbone. There a few fibreglass guys out there building custom tanks for these style chassis, but we always try to be different and not follow the pack. Plus I am a fabricator, and good enough to get myself into some decent trouble.

So let’s build our own tank! Here’s some things to consider with tank design on a Flat Track race bike. Is it sleek and aerodynamic? Is there enough fuel to finish a 25 lap event on a mile track? Do you have enough clearance for the rider to be able to tuck in. Lastly, is there enough clearance between triple trees and gas tank to be able to turn the front wheel at extreme angles for sliding and to battle a nasty tank slapper? I got a vision in my head and started sketching and cutting heavy paper and cardboard. I then taped together a model tank onto the frame. Using empty quart and half-gallon oil bottles to lay in my model, I got an idea as to the capacity the tank would hold. That was some real Rocket Science right there. Once happy, I transferred everything to wood, cut it all out and made a buck to build from.  Next I got some 3003 Aluminum sheet, cut my pieces out and bent, rolled and shaped them to fit my wooden buck. For this bike, we decided to run with the OEM fuel pump to keep things clean and tidy. It mounts right inside the tank, so there would be no need for a messy external pressure regulator, inline fuel pump, excessive fuel lines and wiring.  Choosing to run the perimeter frame also allowed us to add a big fuel sump to the bottom of the fuel tank that sits down in the frame rails when the tank is fitted to the chassis.

With the panels all cut and layed out into position, I fired up the TIG welder and started dabbing filler rod into the melted aluminum puddle, fusing the tank into one unit. Welding done, I went to work with the Vixen file and Scotch Brite pads cleaning everything up to a nice brushed aluminum finish. Next I pressure and water tested the tank to confirm the welds were good and the tank was properly sealed. Very happy with the end result, I decided to shoot it in clear coat so as to not hide my hard work. I normally build all my own exhausts, but looking to improve the bike’s performance, I had been in contact with some of my connections at S&S Cycle in Wisconsin. Throwing ideas around and feeling them out for some of their big powerhouse knowledge, I find out that Flat Track was a new market for them. Apparently they are the exhaust builders for the new factory Indian Flat Track race bikes. So after months of talking back and forth, we were able to do a collaboration with S&S and build these one-off. 2-into-2 stainless stepped pipes that are music to your ears on this engine. Being as we are a custom shop, we like to build and machine as much of the bike as we can for the projects at hand. The rear brake hanger, battery box, handlebar pullbacks, foot peg, brake and shift lever mounts were all ours. We cut out, machined, welded and polished them from 6061 Aluminum right here at River Rat Cycle Fab. The custom shift lever gives the rider quick, easy shift with a standard pattern. The biggest headache of the whole build was taking the OEM Ninja 650R wiring harness and disecting it, making all the proper cuts in the proper locations, and then eliminating 85% of the harness. Adding resistors in the right spots and joining the proper wires together was a real big ask. These are fuel injected bikes, so imagine the ECU, relays, sensors and switches it takes to build one for Kawasaki. Now imagine taking all that and converting it to race only. It was truly bonkers. I had a whole week of nights at the kitchen table with schematics, a big ol’ mess of wiring and maybe a couple of beers for my sanity. All in all, it is very rewarding to know that, man, you just re-engineered Kawasaki’s Ninja 650R wiring system. And then we were done. You can see this beast rip-roaring around America’s dirt tracks, racing in the American Flat Track Series at speeds of over 130mph. It’s just a man and a two-wheel machine. No cages, no seat belts or harnesses. Boy, I love this game.