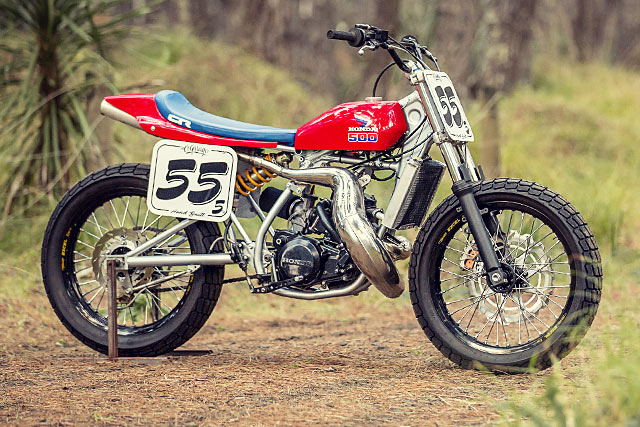 When you think about it, there’s some strange parallels between drifting a car and flat tracking a bike. First and foremost, there’s the complete disregard for traction. Then there’s the loose rear end. Hell, we’ve been to drunken college parties with less swinging rears than these two genres. So it should come as zero surprise to you that there’s quite a few drift builders out there who are also trying trackers. Our mate Nigel Petrie from Engineered to Slide is one. And here’s another – New Zealand’s Adam Hedges. With his C’s Garage drift shop, he’s teamed up with his brother at Earnest Co. to try his hand at a custom tracker build. And what a build it is.

Adam has been fabricating race cars for over 10 years and is also involved in many aspects of the sport. His fabrication workshop, C’s Garage, was born from a passion for metal work and drift cars, and since its inception in 2007 it has become well-known in the drifting scene, both locally and globally.

Adam himself was a professional drift racer for the last two years. This year, however, bikes and building cars has taken priority over the competition. With some spare time on his hands he’s become heavily involved in Earnest Co., his brother’s workwear business. And building tracker bikes too, apparently. As a matter of fact, bikes have taken a rather strong hold on Adam over the past few years. Since this here Honda CR500 was completed, he’s added two CR250s and a CRF250 to the workshop pre-build lineup. Riding a friend’s clay oval is all he can think about at the moment, which is a mindset we’d find hard to fault.

So, what about the build? “I bought the bike as a completely stock ‘85 CR500 dirt bike freshly imported from southern California,” says Adam. “To be honest it was immaculate, and it took a very strong will to start tearing it down.” “This was my first bike build after owning plenty of regular dirt bikes in the past. I’ve always had a passion for two-stroke Hondas, and naturally the big 500s have been a dream of mine to own.”

“The idea behind the build was to create a bike that could have been a real 80s Honda Factory flat track bike. So I tried to keep things looking like they would have if they’d come straight out of the factory. Basically, if people could look at the bike and not know what was me and what was Honda, I was happy.” The Honda’s main purposed is to have fun on dirt tracks, but even before Adam started the build he wanted it to be street legal and he still has plans to get it on the road. But first things first – the dirt.

“I started by building a custom chromoly tubular swing arm that is about 1.5″ shorter than the stock item. The shock is off a Ducati sports bike, but with a softer spring. The only parts left from the original dirt bike are the frame and the motor.” Next up, he fabricated a chromoly rear subframe to suit the fibreglass Harley XR750-style tail section. The tank is a fibreglass ‘Champion’ style unit from the UK. “For the exhaust system, I kept the FMF expansion chamber that came with the bike, and then I fabricated a new ‘mid pipe’ that joins up to a FMF muffler that’s mounted centrally under the tail section.” “Up front I’ve got some ‘04 yamaha R6 forks to which I mounted a Brembo caliper off a KTM dirtbike. The rear Brembo caliper is off a Ducati Monster. The CR was originally a drum brake rear, so I fabricated a mount for a CRF master cylinder and made up a new lower-mounted rear brake pedal.” “Paint-wise, I sprayed the frame, tank and seat myself in a Honda colour scheme that I thought would look right. Lastly, I fabbed up some number boards and cut some vinyl lettering to finish it all off. The only piece of work that wasn’t carried out by myself was the seat. I wouldn’t say that I’m anywhere near confident with a sewing machine, so I left it to an expert instead.”