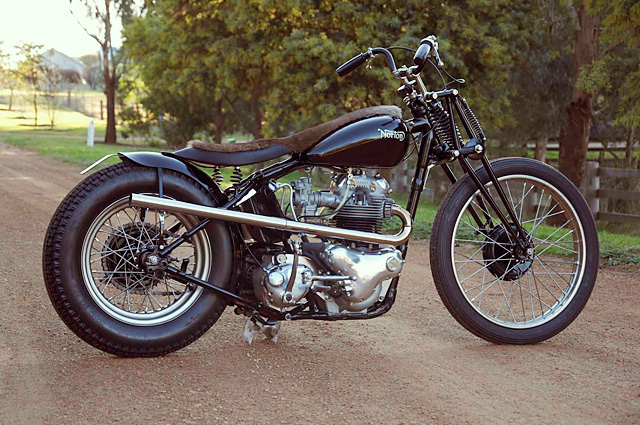 The custom motorcycle business has a hierarchy that is more organic than most; it’s not about money or ego but sheer ability. At its most pure form it is simply about the quality, creativity and workmanship of the bikes you build. Australia’s Matt Machine is one of the builders at the top. Living an idyllic life in the bush, his creations are as real and honest as the environment around him and this Norton custom was deemed so good it won “Best British” at the Born Free 7 show. But this Norton didn’t come together like most builds, it wasn’t a customer order or a bike planned out and built from predetermined parts but a culmination of more than a decade of Matt’s life and evolution as a builder. “I went to a clearance sale of an old motorcycle workshop around the early 2000s and I picked up a late 30s Norton rigid frame and girder front end by chance” says the man who also happens to be an architect by trade. At the same time Matt was stilling living in the city, Newtown, Sydney and on the living room floor of his small terrace home was screwing together a ’66 Norton Atlas motor. With two lots of classic British machinery in his possession one night he had an idea, a little bit of fun, “measure up the crankcase mount holes and the frame cradle holes to see how close a match they were and there it was, the motor fit straight into the frame and sat in the cradle.” From there the Norton was slowly pieced together over the space of a year, it was featured in a magazine, ridden by Matt to a number of shows and moved with him to the country where it got a good flogging up and down the dirt roads. For years to follow it would sit in his shed, collecting the dust that is swept in when the winds blow or a car comes up the driveway and Matt focussed on other projects. Then as he was considering a full refurb Mike and Grant the men behind Born Free in the US suggested he stick it on a plane and take it over for BF7. That honour was all the motivation that was needed and the bike that is now pictured before you started its final journey. The frame is a 1937 Norton ES2 rigid with the exquisite girder front end from the same year. It not only looks the business but the triangular design provides impressive strength for its light weight and the anti-dive nature of a girder fork provides great feel even under hard braking. The paint work comes courtesy of the exceptionally talented Victorian painter Karl of KDS Designs who laid down the black enamel with the tank getting a hand-lettered Norton logo in an old English white that works beautifully with the less is more design of the entire build. The black paint work extends to pieces like the new rear fender that sits over the back tyre perfectly following its contours and finishing in a flip-up duck bill. The new oil tank is one of many of Matt’s creations, originally he felt the bike ran hotter than it should and the increased capacity has solved that problem. But it’s the craftsmanship combined with the function that makes it such a work of art. Sculpted from steel it sits perfectly in the frame, the filler neck cut from exhaust pipe and the feed pipes curves not distracting from the bikes flowing lines. That Atlas 750 motor is a 1966 unit that’ll shake, rattle and roll you all the way down the road and in a lightweight ‘30s frame it is a sheer brute! The top end breathes easy thanks to a well ported head and the addition of a high lift cam. Tipping in the air/fuel mixture is a beautiful old Italian, a single Dell’Orto PHF 32 A carb for which Matt fabricated a new inlet to support the change. Those stunning exhaust pipes are handcrafted by Matt from stainless steel, internally baffled, multiple diameters were tried and tried again until Matt had the exact form and function he was after. Shifting through a Norton 4 speed box with an open primary it gives you a distinctly mechanical visual look to match the thunderous roar of the engine. Sending that barking mad power to the ground, or trying to anyway, is an Avon MkII tyre that provides the vintage look and is fitted to a 16 inch rim in a satin nickel finish. The hub and brake are Triumph items that have been stripped and overhauled with black enamel to finish. The front is a Norton hub and brake, Triumph conical brake plate and the massive 21 inch rim also receives the nickel treatment and is wrapped in another Avon product the popular Speedmaster. Steering the Norton was once left to a set of flat bars but for the trip to the US it now features a more bobber like pair mounted to the risers, with black grips and just the levers and throttle assembly for the ultimate in minimalism. Then there are the little items that you appreciate the more you look over the bike, the handcrafted engine plates, BCM taillight, the alloy pegs from Throwback Cycle Parts and the Magneto with total loss battery system. But perhaps my favourite part of the build is Matt’s variation on a chopper seat, yes it is sprung like a unit you’d see on a bobber, but both the base and foam extend over the tank and to the rear over the fender. With the ultimate Australian finishing touch a Kangaroo skin cover sourced from the nation’s capital just a short drive from Matt’s farm. Just writing about Matt Machine’s creations is an intimidating process; I spent hours looking over his Instagram account getting a feel for what inspires him and analysing the progress pictures of the build to see how he works. A world-class builder, architect, fabricator and show winner; he also happens to be a hell of a nice guy from the Australian bush who is not even close to done when it comes to taking on the challenges that await. Just be sure to follow the ride.