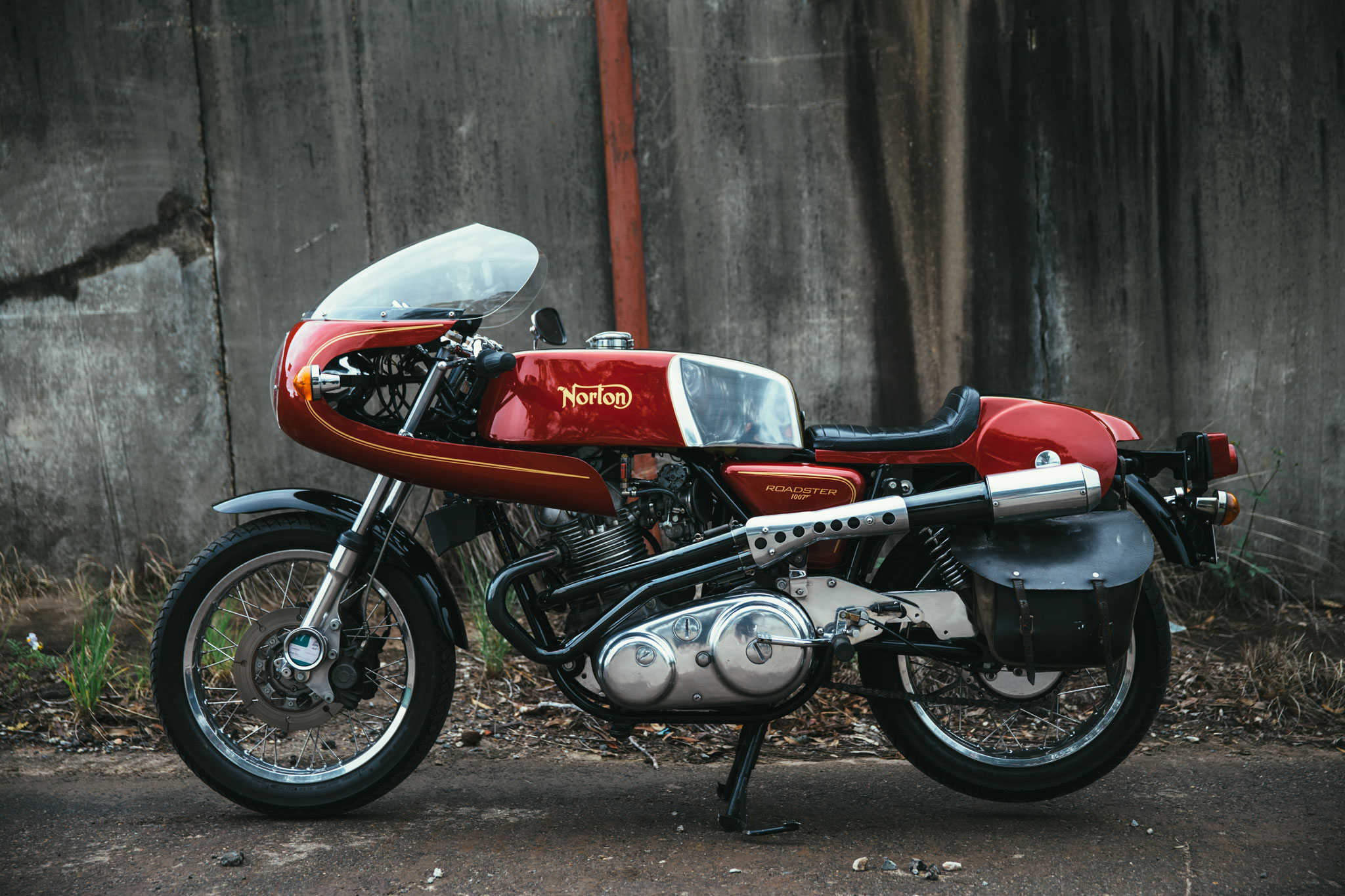 Norton have recently announced it will be manufacturing bikes again. They’ve had a bumpy ride over the last few years, declaring bankruptcy and then being acquired by the giant Indian bike maker TVS. They now have a new multi-million dollar factory in Solihull, UK, and have hired a team of talented designers in the hope of reviving this legendary marque. Back in their heyday, they were the quintessential British motorcycle, and the Commando was their finest achievement. Launched in 1968, it was the fastest superbike in the world at the time and would dominate race tracks for years. This Norton Roadster has been built by Australian-based shed builder, Bruce, and is the perfect marriage between customisation and modification – although maybe not one for the purists amongst us.

The Norton 850 Roadster – or Commando, as it was also more commonly called – produced by Norton from 1967 until 1977. They initially had a 750cc displacement, which was then boosted up to 850cc in 1973, although the actual displacements were 745cc and 828cc respectively, a reflection of the 70s free-spirited attitude. The Commando saw various upgrades and incarnations over its hugely popular lifetime – with the ’Roadster’ making its debut in June of 1970.

And so we come back to this particular Roadster – a 1974 model. Bruce had acquired the machine back in 1981, purchasing it off a friend’s brother. From the day the bike was picked up, it was destined for finer things, with a hearty dose of customisation and modification spinning in Bruce’s head. “I had only ridden the bike for a week before the motor developed some lower end noise, and so we stripped it and then rebuilt it as a 920cc.”

The bike would remain somewhat unmolested for a while, with Bruce enjoying its extra bit of chutzpah until 2010, when some custom gears started turning in his head once more. This time the bike would receive an aesthetic injection of work paired with performance upgrades, making it walk the walk and talk the talk. With plenty of Café Racer builds popping up all over the globe, inspiration was rife. “Wanting to convert the bike into a complete custom café racer, I got to work completely stripping it down so that I could then rebuild it to suit.” The engine is a complete Steve Maney 1007 engine: Forge Pistons, Carillo rods, S3 Cam upgrade push rods and head work.”

This is where the marriage of customisation and modification shines. Not only did Bruce upgrade the looks of the machine, he also took the performance to the next level with the 1007cc engine, bringing the function in line with the form. “I changed the Carby to a Mikuni flat side 40mm pump action system, modifying the intake manifolds to suit.”

The gearbox is a TT extra heavy duty 5-speed, and a primary belt drive which is a 40mm race pulley and belt kit. The front braking system is a Norman White twin disc and A.P. calipers, with front forks being upgraded with improved internals. The faring, seat, and foot peg assembly is a Mick Hemmings kit. “I had the alloy fuel tank handmade in Scotland which really bolsters the British racing vintage that the machine shows off so well.”

“The thing I like most about the bike is the exhaust noise, along with the combination of the torque, handling, and braking. It’s great fun for an old bike! The Norton is now famous, as I had Giacomo Agostini sign the backseat housing that I have had clear-coated.”

This Norton has been tastefully built, leaving the best bits on this almost 50-year-old bike and upgrading the rest to build the ultimate classic café racer. With Norton manufacturing bikes again, the designers could do worse than making a modern version of this stunning Roadster.