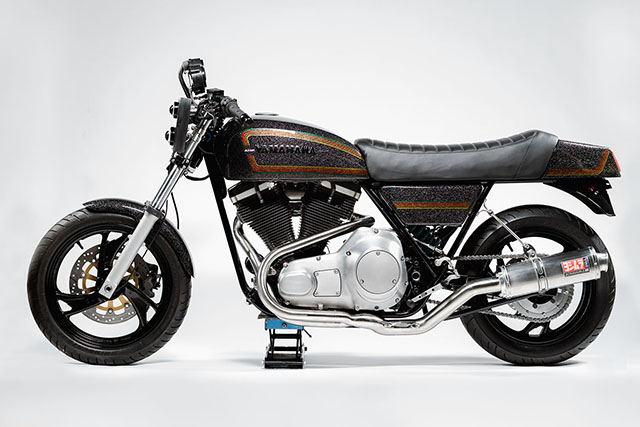 It’s hard not to look back at your first motorcycle with a distinct admiration and nostalgia, no matter how beat-up or prone-to-error it may have been. Much like your first love, there’s something highly-sentimental about sharing a host of new emotions, sensations, and experiences with your first motorcycle. For Jonathan “Jonno” Shakesby, his introduction to the world of riding came on a 1980 Suzuki GS850G in 1989. Over a quarter-of-a-century, four-continents, and more than three-dozen bikes later, and the British expat still holds a special place in his heart for the early ‘80s UJM. 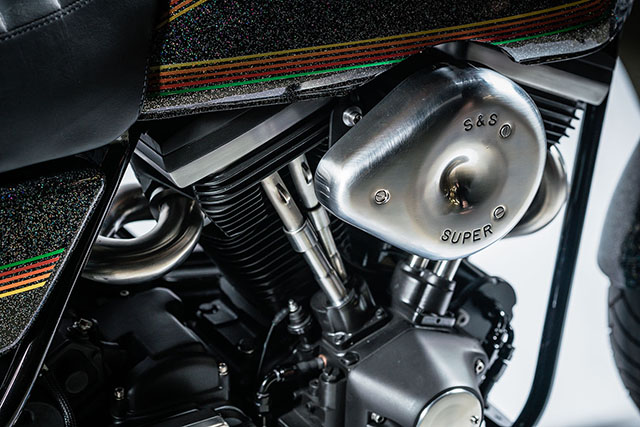 When Jonno first picked up what he calls a “butt ugly” ’93 Harley-Davidson FXR, he didn’t know then that he’d be returning to his moto-roots. The plan initially called for a cafe racer, but by the time Jonno started work on the build, he felt cafe racers were becoming a bit too ubiquitous so instead, he opted to take the road-less-traveled. Eventually, it was decided the now-Helsinki-based Brit would use the Harley as the basis for a tribute to the Zook GS — his first two-wheeled love. Jonno started with the powertrain. The FXR’s motor was pulled, torn down, and built back up with an array of new internals. “The engine was fitted with new valve guides with an R grind on the inlet valves and three-angles on the exhausts with all barrel and head surfaces getting a clean up skim. I blended the valve seat inserts in, removing any edges but leaving the inlet port shapes and surfaces well alone, while also polishing the exhaust ports smooth and shiny,” explains Jonno. 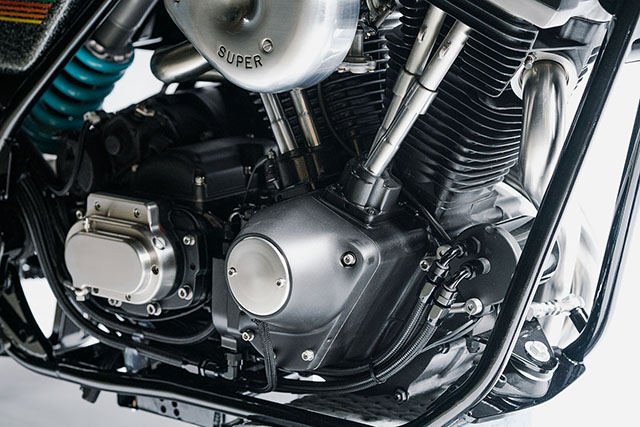 The 1,340cc twin’s heads were pieced back together using Kibblewhite beehive valve springs and tighter-fitting rocker shafts, on top of the bores being reworked to accommodate new forged 10.5 +.20” pistons before being re-assembled with solid pushrods. The Harley was also given a Jim’s shifter conversion, a hydraulic clutch conversion, a Daytona Twin Tech programmable ignition unit, and dual high output mini coils. The FXR still runs the Harley’s stock carb setup, though burnt fumes are now ejected via a bespoke full stainless steel exhaust system culminating in a Yoshimura pipe originally made for a Hayabusa. 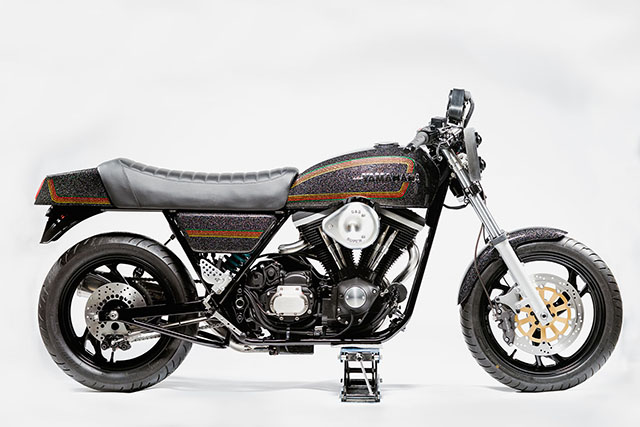 The rebuilt engine was shoehorned into a Cobra Engineering lightweight chassis with stock FXR geometry. At some point, Jonno got the idea for a mono-shocked setup, so the FXR’s swing-arm was stretched by 6.5cm, reinforced via Metmachex aluminum swingarm mounting plates, and then reinstalled with SKF sealed spherical bearings and a homemade Sta-Bo system. Nitron Racing built a custom rear shock to go with the modified swing-arm, too. 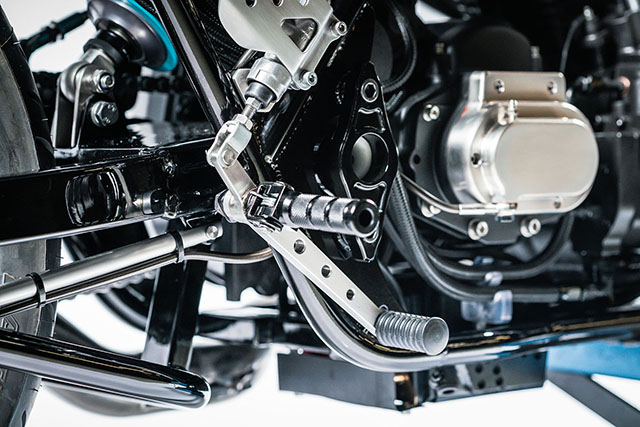 Up front, the chassis is fitted with a set of conventional forks off a ZZR1100 with Bitubo progressive springs. A set of TDM850 wheels (18” front, 17” rear) were sourced, tweaked in order to fit the new front-end, and then shod in Bridgestone Battlax rubber. Slowing the one-off V-Twin is a six-piston caliper borrowed from a Gixxer, clamping down on a disc off a Yamaha EXUP model and linked to a Buell master cylinder via HEL lines. Not wanting the large profile of a classic round headlight bucket to throw off the custom’s silhouette, Jonno tacked on a stacked projector headlight arrangement held in adjustable one-off brackets. 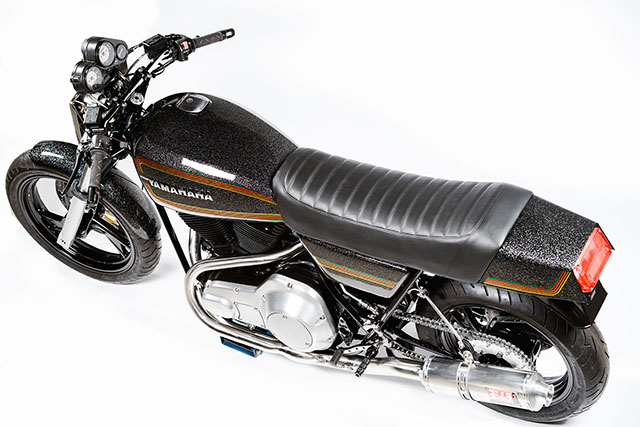 The FXR’s electronics also received an overhaul with an Odyssey gel battery (in a custom battery box) and a custom wiring loom routed into a Motogadget m-unit. The cockpit also got a complete revamp and is now comprised of ZRX switchgear, Lucas drag bars, LED bar-end indicators, aftermarket grips, and the instrumentation plucked off a TDM850. The foot-controls are custom jobs that are absolutely gorgeous, consisting of GSX-R footpegs with custom linkages and brackets. 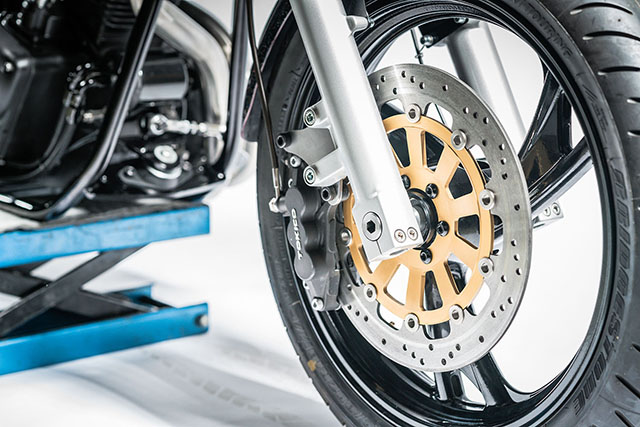 For the bodywork, Jonno crafted wooden molds for the new side panels before moving onto the custom tail section which houses a GS850 tail light. The rear fender was pulled from a GS850 while the front unit is from a Yamaha XV125 and was widened to better shroud the wider front wheel. “These were then layered up in fiberglass and epoxy along with the seat base. The oil had to go somewhere, too, so I made a large capacity rectangular tank from sheet steel to rubber mount under the seat with a tunnel in the front to clear the shock,” Jonno tells us. 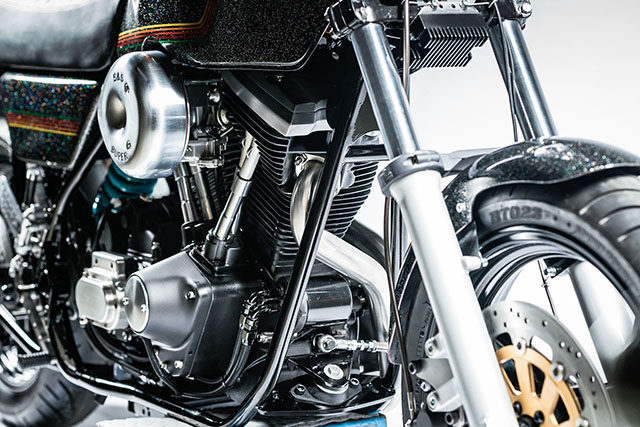 For the tank, he went with the cell off of a GS850 that required a custom base to fit the V-Twin’s frame. To get the TDM’s fuel-gauge to work, Jonno installed the fuel-sensor from a CX500. Wanting to replicate the oversized seats of the ‘70s and ‘80s, the UK-born builder purchased a Giuliari GS seat on eBay, though it was a bit too wide when it showed up, so it was reshaped and then professionally upholstered. 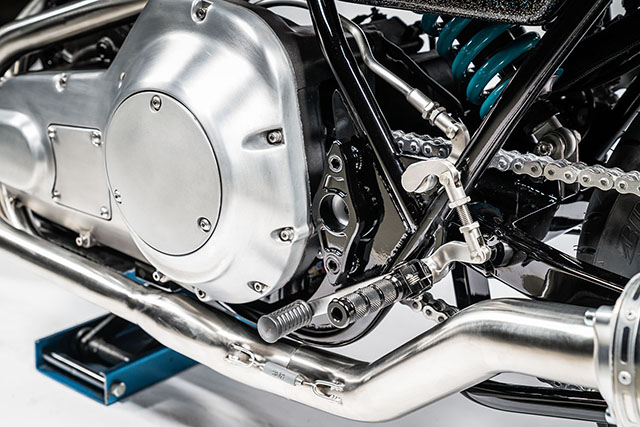 With everything else sorted, the bike was hauled off for painting. The frame, swing-arm, and oil-tank were done up in a pearlescent black while the tank and bespoke bodywork were adorned in a silver and black sparkle metallic livery with bright pin striping. “The paint was inspired by AMF Harleys, the pride flag, and ‘70s paint styles. The ‘Yamahaha’ badges on it should annoy or delight…although I find annoyance more fun,” says a cheeky Jonno. 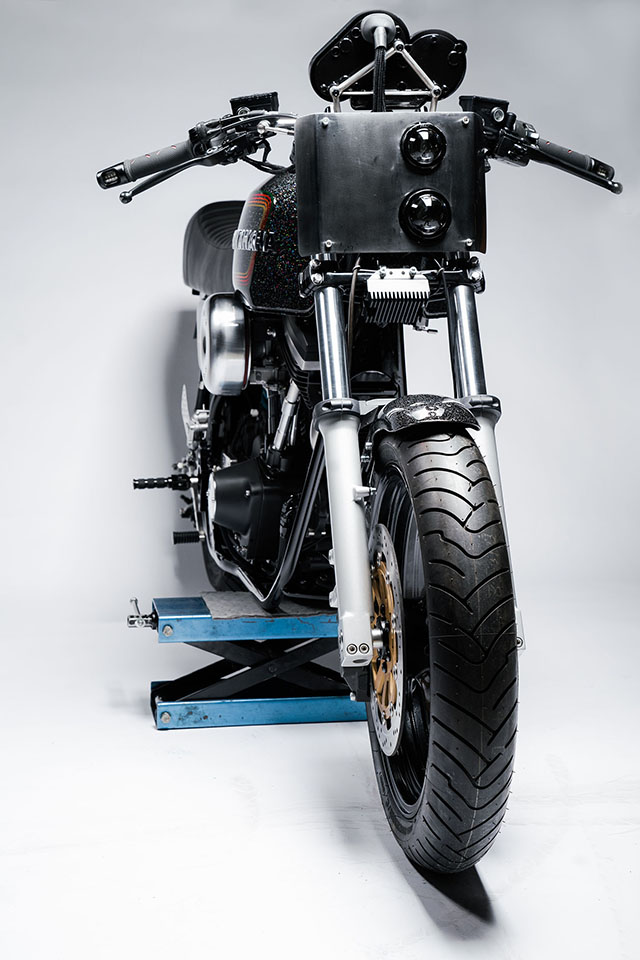 One of the few downsides to the recent rise in the “new wave” custom motorcycle scene’s popularity, is that it can be hard to build something that truly stands out from the crowd without going the over-the-top, overly engineered route, though, love it or hate it, it’s hard to deny just how unique this UJM’d Harley really is. Though it’s a far cry from the vision he had when he began the project, Jonno has managed to recapture some of the magic from his early days of riding, while at the same time producing one very tasty one-off motorcycle. 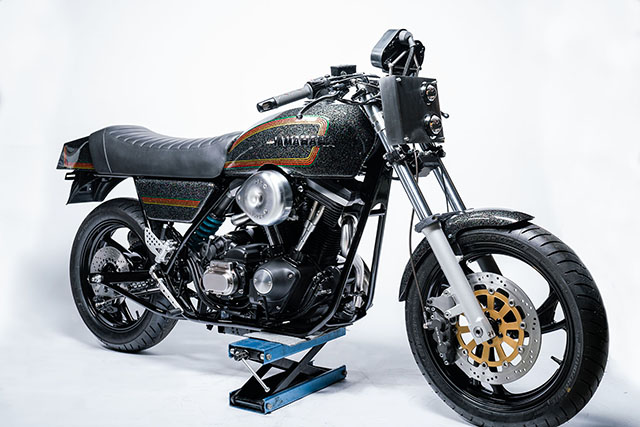