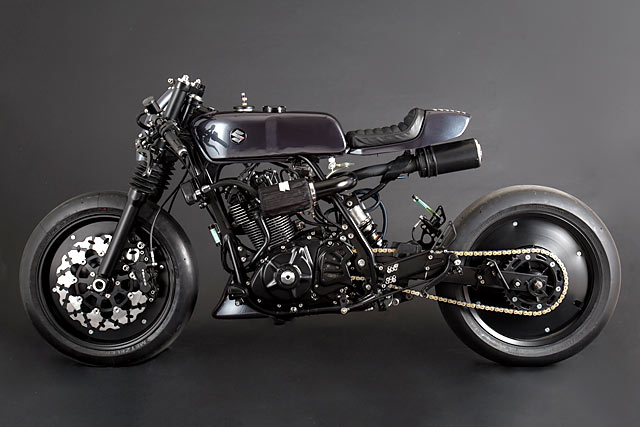 The name Atelier has been floating around the custom bike scene for the last few years, usually in reference to our brilliant German friends from Diamond Atelier. But the word is French for a workshop or studio where a master craftsman plies his trade in private, away from the gazing eyes of the public. Le French Atelier is just such a place and where else could they be located than in the city of the Louvre, Paris. Now the three young artists behind the name are ready to unveil their latest chef-d’oeuvre. A radical cafe racer that’s back to the future, it’s a 1992 Suzuki DR650 more than capable of 88mph. Having begun their journey in Versailles before making the move to a new house of creativity in Paris, Le French Atelier is fuelled by a pure passion for two wheels that mandates every bike they build is better than the last. Vincent Amar along with brothers Thomas & Anthony Letourneur are not here simply to churn out bolt on bikes, but to take any machine that peaks their interest and from that canvas create a masterpiece. Recovering this ’92 DR650 from a previous build of their own that was used in a movie shoot, they knew immediately what they had in mind. “We wanted to create a radical cafe racer with a mono cylinder, something pure and simple. But we wanted a touch of technology, something racey, aggressive and unique. We are really inspired from one of the builders we like the most; Diamond Atelier,” explains Vincent. Stripped back to a roller the DR comes in for a complete overhaul with the frame and swingarm smoothed out and painted to perfection. A lightweight bike to begin with, that didn’t stop the boys from removing absolutely everything that wasn’t needed and more. The subframe is a hand-built piece created in-house, especially designed for the ultra-aggressive tail-piece. The slim-lined unit offers just enough room for one and with a frenched-in taillight its minimalist perfection. A common theme to Le French’s builds is taking small gas tanks from old dirt bikes and adapting them to fit and the Suzuki DR is no exception. Even on a thumper the lines don’t extend beyond the reaches of the single cylinder engine, creating an incredibly aggressive look. A small chin spoiler helps the modernisation before work commenced on that incredible headlight unit. “The handmade front hull with the headlight, we made it 3 times before we had the result we wanted!” The deep metallic graphite paint work is just enough difference in dark hues to contrast with the all black components. While a touch of flake catches the eye as the now tiny DR flashes by in the sunlight. The position of the controls is a dead giveaway as to how this bike is intended to be ridden; the modern rearsets keep the knees well tucked up. While the low down clip-ons keep the weight on the wrists and give maximum control for crazy corner entry speeds.

But it’s the engine that makes the DR a favourite and it always has, upon release when 2-strokes reigned supreme Motorcycle News stated quite simply, “If you could somehow put the DR powerband into a 210-pound motorcrosser, you could win world championships on it.” That’s high praise and this example pumps more ponies with a big Keihin carb having air rammed down its throat thanks to the forward facing filter. The exhaust also elicits some more power from the 640cc single, ceramic coated for fast gas flow and a single GP muffler venting out under the seat. Visually this has to be one of the cleanest old thumper engines we’ve ever seen, every single bolt has been replaced with high-end stainless items, while the heat proof paint is flawless. Helping to keep things tidy all the fuel, oil and power lines are protected by the same heat shielding sheath and the whole thing looks like it’s just come off the factory floor.

If the racing DR’s engine was a peach upon release the suspension and brakes were considered a rotten mess. But Le French Atelier have taken care of business making sure this little crotch rocket is glued to the ground and stops on a dime. The skinny little pogo stick Kayaba front forks have been given the flick and modern telescopic units bolted in place with full adjustability. These also bring with them big Tokico calipers to clamp the huge dual front rotors. Out back the old factory 20 buck shock that provided all the dampening of a sponge cake is gone and a fully adjustable item bolted in its place. But if you want grip then you always start with the right rubber and a full set of slicks on such a lightweight machine means incredible corner speeds. Up front an Ian Hutchinson spec Metzeler gets the call up, while to find the right size for the DR the boys picked out a Continental ContiTrack liquorice lace for the rear. These are bolted up to a set of wheels that take on a solid look, thanks to black removable moon discs that give a futuristic touch to the nearly 30-year-old machine.

More modern tech was used to finish out the Suzuki build with a total rewire of the electrics and new Motogadget switches up on the bars. Brembo provides the adjustable levers and hydraulic hardware with the Domino fast action throttle perfect for pinning it out of each and every corner. Then the bike is totally torn down and as Vincent remarks proudly, “And reassembled like in a bike factory.” Its exceptional quality control, crazy appearance and insane performance all belie the fact that this racer was once a cheap dual-purpose machine. Such is the brilliance of the latest Atelier.