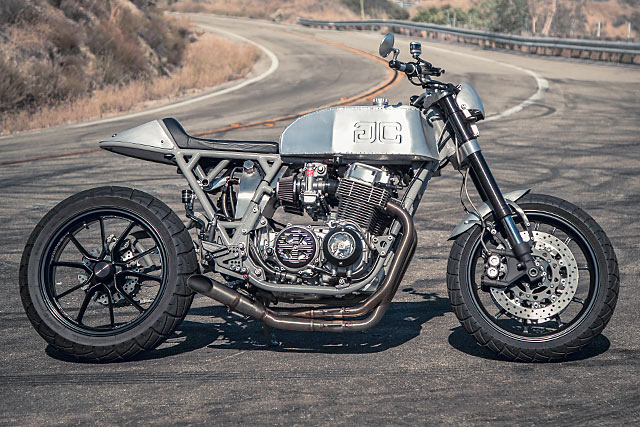 It’s one of the truly great inventions of the last 200 years. So global is its appeal, it has taken on cult status, put a country on the map and delivers more uses than one could ever possibly need. If the Offiziersmesser has one problem, it’s that nobody but German speakers can pronounce its bloody name; so G.I.’s came up with the moniker that has stuck ever since, the ‘Swiss Army knife.’ As a design it looks brilliant; it serves a purpose for every occasion and in the right hands it’s lethal. So it should come as no surprise that such a tool served as inspiration for this revolutionary retro streetfighter built by California’s Gasser Customs. And just like the little red knife this stunning ‘78 Honda CB750 comes with a much more user-friendly name, ‘Ol’ Red.’ Head honcho at Gasser Customs Adam Gaspic has previously built a Honda CB750 so good that it caught Comedian Jay Leno’s eye and was featured on his show. So when Palmer West, one of the men behind Aether Apparel, was looking for a Honda to be built he knew exactly the man for the job! Luckily for him Adam had purchased the bike five years earlier and Palmer spotted it as the perfect donor sitting in a corner of the North Hollywood workshop. “The original concept of the bike was born from inspiration photographs he gave me of an old WWII bomber, a Porsche 356 and a pocket knife. All three of those things were hand-built for a purpose, and gave you a feeling of admiration for their capabilities and the hard work that went into them” explains Gaspic. The build starts with that 1978 Honda CB750F Supersport that Adam took back to the barebones until all that was sitting on his bench was a frame. But this wouldn’t be a bolt-on build throwing a catalogues worth of parts at the machine. West had a desire to see “the hand” in the motorcycle, large amounts of fabrication that was left on display to be enjoyed and not hidden away. Adam was more than happy to oblige and the frame is simply a work of art with a host of brilliant pieces of engineering for what was to come. Firstly the frame itself has been braced and the new steel sections perfectly blended into the existing Honda metal. A new subframe was next on the list, but rather than simply cut the stock item and weld in a hoop Adam has re-engineered the entire back half of the bike. With a plan to convert the CB to a mono-shock suspension setup, the lower section of the new subframe incorporates a fully braced shock mount. While the tail-piece supporting structure is also fully integrated and the whole thing starts to look like one of Ducati’s brilliant steel trellis frames. Which is exactly where Adam got the idea for the single sided swingarm that now graces the Honda’s rear. As Adam explains it’s not something you just slap together without forethought “The initial engineering that went into planning the functionality of this build was definitely a big part of making sure it all came together.” To match the new lightweight tricked out rear suspension there was no way the skinny stock front forks could be allowed to remain in place. So a set of modern Yamaha inverted forks take over, tuned to match the rear. But rather than just slap these on and hope the geometry was acceptable, Adam went the extra mile and designed new triple clamps to ensure things like rake and trail were spot on for precise handing. The Yamaha also donates its four piston calipers that clamp a set of twin drilled discs. Combining with a single rear wave disc and Brembo caliper the braking is now light years ahead of what once rolled off the factory floor in ‘78. With a high quality rolling chassis now complete the attention turned to the body work and Palmer’s philosophy of being able to literally see the hand-made parts was always in Adam’s mind, “Which was one of the reasons we chose to leave the welds on the tank exposed and also not polish the metal work out completely but rather so you could slightly see the marks from where I had hammered and shaped the aluminium. He wanted people to know this was a unique machine, not an assembly line produced commuter.” The result is stunning with the pure functionality of what’s been created taking on a beauty of its own. While the fit and finish of the ribbed metal tail-piece and perfectly stitched black leather seat gives a timeless appearance. The Honda was looking a treat at this stage but to keep up with modern streetfighters the old CB750 engine would need a major overhaul. Starting with the F2 unit gives an immediate head start thanks to the factory’s switch to bigger valves over earlier models and a shift in camshaft profile. The result is an engine capable of 1000rpm more at the top end and with Adam punching capacity out to 836cc things start to get serious. To feed the fire the race proven bank of Keihin CR carbs has been fitted up and roar as they suck air through individual K&N filters. But the real music is made by the 4-2-1 hand-built stainless steel exhaust system that packs a sound as mean as it looks. The engine now produces more than 20hp over stock but it also does it looking a damn sight better. Not only has the engine been treated to a thorough spit and polish, but new side covers and machined accessories add to the big dollar feel. Keeping things cool in the California sun is a newly designed and bespoke oil tank that feeds the liquid gold down a set of braided lines. But it’s not just the engine that is treated to some high quality parts with an array of brilliant bolt-ons fitted up to Ol’ Red. Rizoma and Motogadget come to the party with an exquisite set of adjustable rearsets allowing the bike to be tailored precisely to Palmer’s needs. While up on the top clamp the, this ain’t no cafe racer look, is reinforced with low risers and Rizoma flat bars fitted up. They wear a host of components that wouldn’t look out-of-place on an ultra-modern machine with the reservoirs and controls minimalist in their magnificence. The projector headlight replaces the dated single bulb seven incher and is shielded by Adam’s own take on a custom front screen. The instrumentation is kept to a minimum with a single pressure gauge and a gorgeous Analogue speedo. But if there is one piece of accessorising that really gets the juices flowing it has to be that set of big dollar Marchesini wheels. Wrapped in quality Dunlop rubber they complete the vision of what Adam had always envisioned and what Palmer had in mind. This streetfighter has no crazy paint job, no fancy graphics or neon lights; the only hint of tasteful markings comes from the pressed and machined Gasser Customs logos dotted throughout. And yet against a fleet of modern contenders, fancy and flashy, this creation won 1st place in the sport bike class at last year’s 2016 LA Motorcycle Calendar show. But Adam is quick to point to the real reward he enjoys following the most complex creation of his twelve plus year automotive career – it’s Palmer on Ol’ Red. “Every time I see him ride that bike with the joy and exhilaration and the biggest smile on a man I’ve ever seen, it’s such a great feeling. It is the reason why I do what I do.”