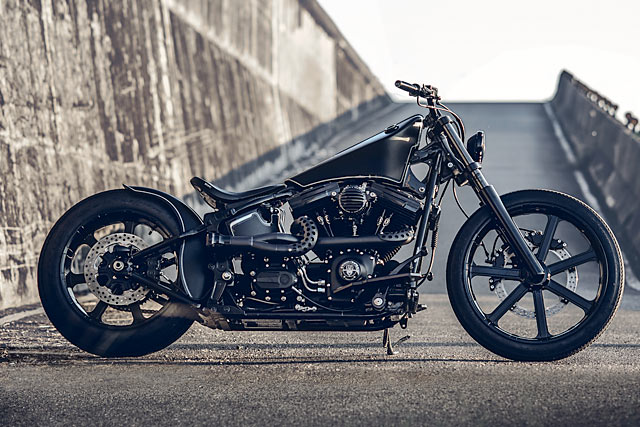 Welcome, Harley Davidson Executive Management! You might not have visited our website before. There’s not too much here for you normally, but maybe you’ve stumbled onto Pipeburn looking for inspiration for future models. It’s hard making those big decisions, like picking between gloss black, matte black, denim black or black black. But why not build something different? Like this custom Harley Davidson 2008 Softail Cross Bones, built by Winston Yeh and the team at Rough Crafts, based in Taipei, Taiwan. And HD designers take note: custom paint doesn’t have to feature airbrushed flames and skulls and half-naked girls straddling dragons. There’s more to the custom scene than that. Look at Rough Crafts. They’ve been making some of the world’s gnarliest customs over the last few years. They’ve always had a distinct style but in recent years they’ve settled into a groove with blackened, beaten down Harleys turning heads across Taiwan and overseas. [superquote]“New bikes to the island require a host of emissions testing, roadworthiness and an unusual interpretive dance routine…”[/superquote]

I know, you’re probably still shocked that Harley Davidson customs aren’t confined to the great United States of ‘Murica. In stock form, this one made its way to Taiwan (a small island off the coast of China, but don’t worry – they don’t get along) as a second-hand import. Tariffs on motos there are prohibitively expensive and new bikes to the island require a host of emissions testing, roadworthiness and an unusual interpretive dance routine performed by the intended owner. As such, there’s not many big Harleys on the island. The Taiwanese tend to buy motorcycles that do crazy things like travel more than 90 miles on a tank of gas and go around corners. But now that stock Cross Bones serves as a platform to showcase the workmanship Winston and his team can do and the quality of parts they build and sell in-house. The damn thing’s incredible. And while there’s hardly a standard bolt left on the bike, Winston isn’t quick to yell about the bits and pieces that adorn the custom. ‘I never want anything to stand out on my builds,’ he says. ‘I never want anything jumping out at you when you see it.’ Dear HD Executive Management™ – Winston is being humble. Because all the customers who bought the Cross Bones on it’s release in the late 2000’s will be quick to realise that the bike on their screen has no resemblance to the softail bobber that struggled to move off the showroom floor. Long gone is the bouncing springer front end. It’s been replaced by an Arlen Ness forks, with titanium coated inner tubes. It’s all held together by a 41mm triple tree supplied by Speed Merchant. And check out that front 6-piston Performance Machine caliper – that’s how you pull up a bike. And the rear runs a four piston from the same manufacturer, too. Both are mounted to Arlen Ness rims and run Firestones. I know, Mr Executive, they’re Firestones. But if you wanted a bike that really handled you wouldn’t sell the Softail in the first place. That tidy tank and rear fender were fabricated up in-house by Winston and the team at Rough Crafts, with the standard oil tank altered. Engine-wise, not too much has been changed from the stock unit, but a Rough Crafts stubby exhaust and air filter will help the bike breathe and sound like a Harley should. Neat little touches adorn all corners of the bike, with company branding on the pushrods and more obvious locations like the gas cap and oil cap. All those other custom bits and pieces you’ll spot are also by the Taiwan shop – the rocker and timing cover, the primary drive as well as the headlight, grips, bars and brake light. Paint was done by Air Runner Custom paint studio, which doesn’t have as many flaming skulls as you’d like and has a shameful lack of the Freedom Eagle, but maybe it’ll be in the next update. In the meantime, the thing looks as tough as a coffin nail. But Winston himself is humble about his latest build. ‘I wouldn’t say the build itself is that special,’ he explains. ‘It’s all about fit and finish, the wheel choice, the brake set up and the way the smallest details come together for the whole concept.’ Well maybe he’s right, but he’s done a damn good job of making a bobber that’d look as good banging around the backstreets of Taiwan as it would bombing down the interstate of the good ol’ USA. Please Milwaukee – close this browser and go build something like this.