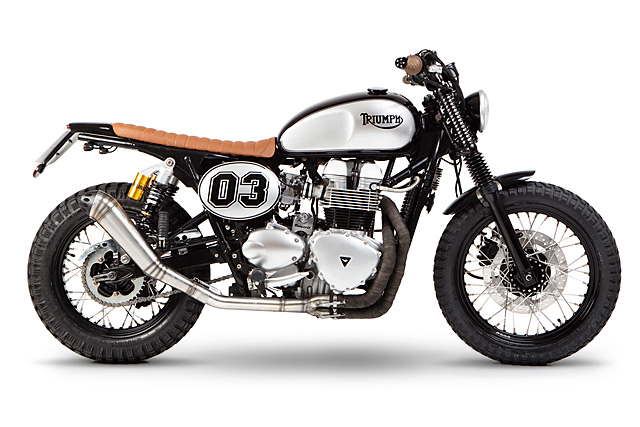 There’s a famous saying in Spain that goes something like this. ‘De una boda sale otra boda.’ Despite our initial guesses about it having something to do with selling your body, it turns out it literally means “from one wedding comes another wedding.” As you can imagine, we were a little confused when Spain’s Tamarit Motorcycles used it in reference to their new bike build. As we started to express our support for what we assumed was Spain’s progressive new human/bike marriage laws, they explained that the first ‘wedding’ was the party to reveal their ‘Superstar’ build, featured a few short months ago on these very pages. Happy to see the bike complete but keen to move on, fate and serendipity conspired to bring them their next wedding and/or customer at the very same event. With their best suits on and a spring in their step, here’s Spain’s Tamarit Motorcycles with their latest build – a 2006 Triumph Bonneville named ‘Pantera’, or as we say in English, ‘The Pather’. Tamara’s Matias and Andrea, with wedding rice still in their hair, filled us in on the big day. “This past summer on May 20th we presented the Triumph “Superstar”, our latest creation, at a small party for its debut. We’d announced the event a week earlier through our social networks with a brief post, but to be honest we weren’t expecting much more than some drinks, music and bike talk with our friends.” “But amid the noise and smiles of the party, a young man named Javier from Barcelona appeared. Apparently he’d been following us on our social networks and on the spur of the moment, he’d decided to come to our humble party in Elche, a pretty serious 1100km (680 mile) round trip. His first words to us were: ‘Hi, I’m Javier and your next bike is mine.’ And indeed it was.” So they talked. His brief to the team was clear; despite being in love with Tamarit’s bikes, he wanted something very comfortable and urban with some off-road capabilities. “An everyday bike for two people and something very sober,” Javier said. “That began our challenge, because until now our bikes had a very definite style; café racer, dirt track and scramblers. Some may have been more ‘pure’ than others, but they all had a very strong look to them. However, what Javier was asking for was something completely new.” Unusually, the Tamarit team began the build with the seat and a new ‘fenderless’ design was given the thumbs up. “Naturally, it does not need a rear fender, as it is incorporated in the underside of the seat itself. It’s made of polyurethane and it’s more than enough for two people while also reducing the size of the original factory seat. Of course it also works with our PLUG AND PLAY philosophy, meaning that it’s a piece that anyone can put on or take off at home with a simple wrench.” The next most significant piece was the bike’s handlebars. Low and very wide, they are apparently really comfortable for most riders. And as for the tires, Tamarit opted for a set of Mitas E07 hoops, giving it a more aggressive look and (according to the tire’s makers) a design that’s intended to split its duties evenly across a 50/50 dirt & road mix. Next up was the fitment of a smaller headlight, intended to simplify the front of the bike, and to look more in tune with the svelte, cut-back appearance the smaller front fender lends to the bike.

Javier’s choice for the engine’s gaseous escapees would be Tamarit’s own ‘Boca Negra’ (or ‘Black Mouth’) set-up, a two-into-one system with a matching perforated side cover on the left and a racing board with his favorite number on the right side. Next came a pair of Bitwell grips in brown, some small blinkers, two mirrors on the handlebar tips and a small speedometer. Wanting to leave their mark up front as strongly as the seat had done at the rear, the idea for some metal springs that were to be place between the upper triple clamp and bottom was floated. Lending an almost girder fork feel to the bike, the team says they fell in love with it almost as soon as they saw it in the flesh.

Lastly came the colour. With Javier’s brief being “a very sober bike,” there’s only a very limited palette to choose from, and in case you’re wondering, ‘Whispering Peach’ isn’t amongst them. “So the color chosen was ‘black’, surely the most elegant and sober of all the colors, and with a gray aluminum highlight in the center of the tank for that classic look.” And classic looks is just what they’ve achieved. For Javier and his new love, we’re sure it’s going to be a long and loving relationship. Just be sure and send us the photos of the wedding night.