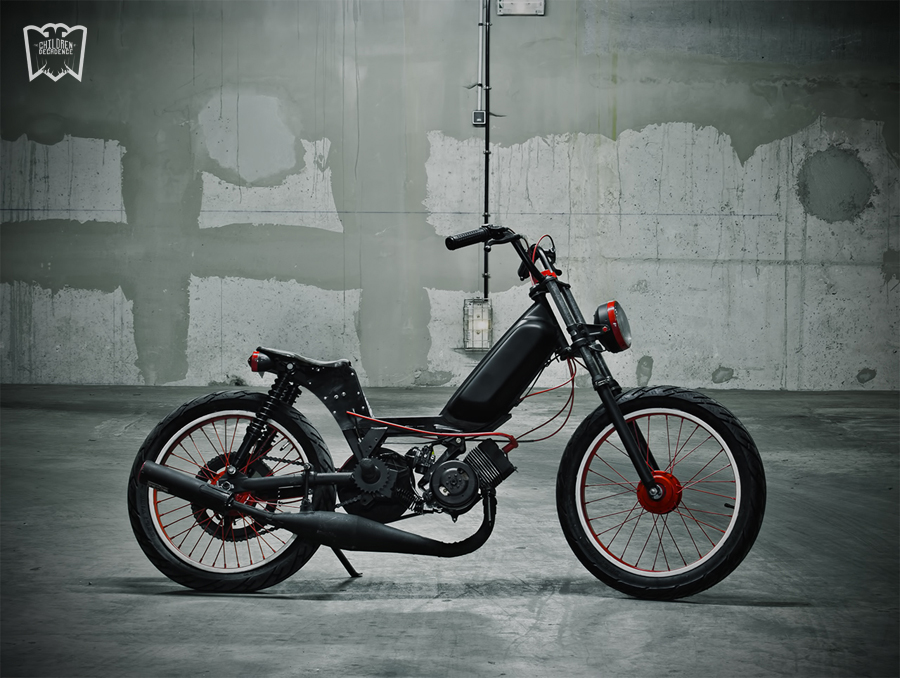 The name ‘Children of Decadence‘ might sound like the latest reality TV show starring Paris Hilton and Nicole Ritchie bathing in Moet cocaine and snorting champagne. But in the real world, or at least in the European motorcycling world, the ‘Children of Decadence’ are a group of Parisian moped builders who are pimping Peugeots like they are going out of style. Their last build, a cafe racer-inspired moped that we featured got you guys talking, and we’re guessing this chopper-inspired 103 will have a similar effect. Thomas Patouillard Demoriane is the Frenchman behind this unique little moped they call ‘Cherry Coke’ – a little sweeter than usual but it still has that caffeine hit. Over to Thom to talk us through the build – remember French is his mother tongue, and we’re not talking about him kissing his old lady. “After doing my job on the TSA with her particular cafe racer shape, I really want to do something with a strong american influence, like a chopper or a bobber.

This machine was given to me by an old guy of my neighborhood, just near my recent workshop. As I let the doors open when I work, it attract the attention of passers and one of them told me that he has an old moped sleeping in his garden. The next day, it was at my door.

After taking off all the parts of the moped, I made a check list of what was missing for the building in order to quickly make some orders. Once the frame was naked, I started by removing all useless parts : side covers, spool holder, storage box, center stand, luggage rack …

The specific chopper shape has been realised by shocks shortening and by adding some height on the fork. I also cut a large part of the frame and prepared my new seat post. The seat was stripped from its support and its suspension and refined on the slopes. “Once all the cuts made​​, stripping for a new painting could begin. For the color, I wanted something classic: black, red and white, directly inspired by Hot Rods.

The originals star wheels were replaced by spoked wheels found here and there, and then painted in bright red with a white stripe brush job on the sides.

For the mechanic, I wanted something really fun to drive, especially in urban traffic. So I put my efforts on the velocity and couple of the engine : short transmission and some work on the engine cases and the exhaust intake. The exhaust pipe is made of several parts : Gianelli Black Gun body and a Derbi Senda cartbridge.A SHA 15mm carburetor was used with a replacement of the grid by a foam and a bigger bing main jet.

All the electric wires has been placed under the seat in the old storage box unit and the covers are in aluminium sheet riveted to the frame. I also add two switchers on them : one for the lighting, the other for the main circuit.”

French may be Thomas’s mother tongue, but we think he’s created one mother of a little moped. We know it would be a blast to ride, however, we’re not sure how comfortable that petite seat would be. To be honest, it looks like it could easily get lost up your derrière after hitting any bump at speed – c’est la vie!

[UPDATE: Thom has just finished another Peugeot 103 he calls the Tempest (pictured below). You can find out a little more about the build here]