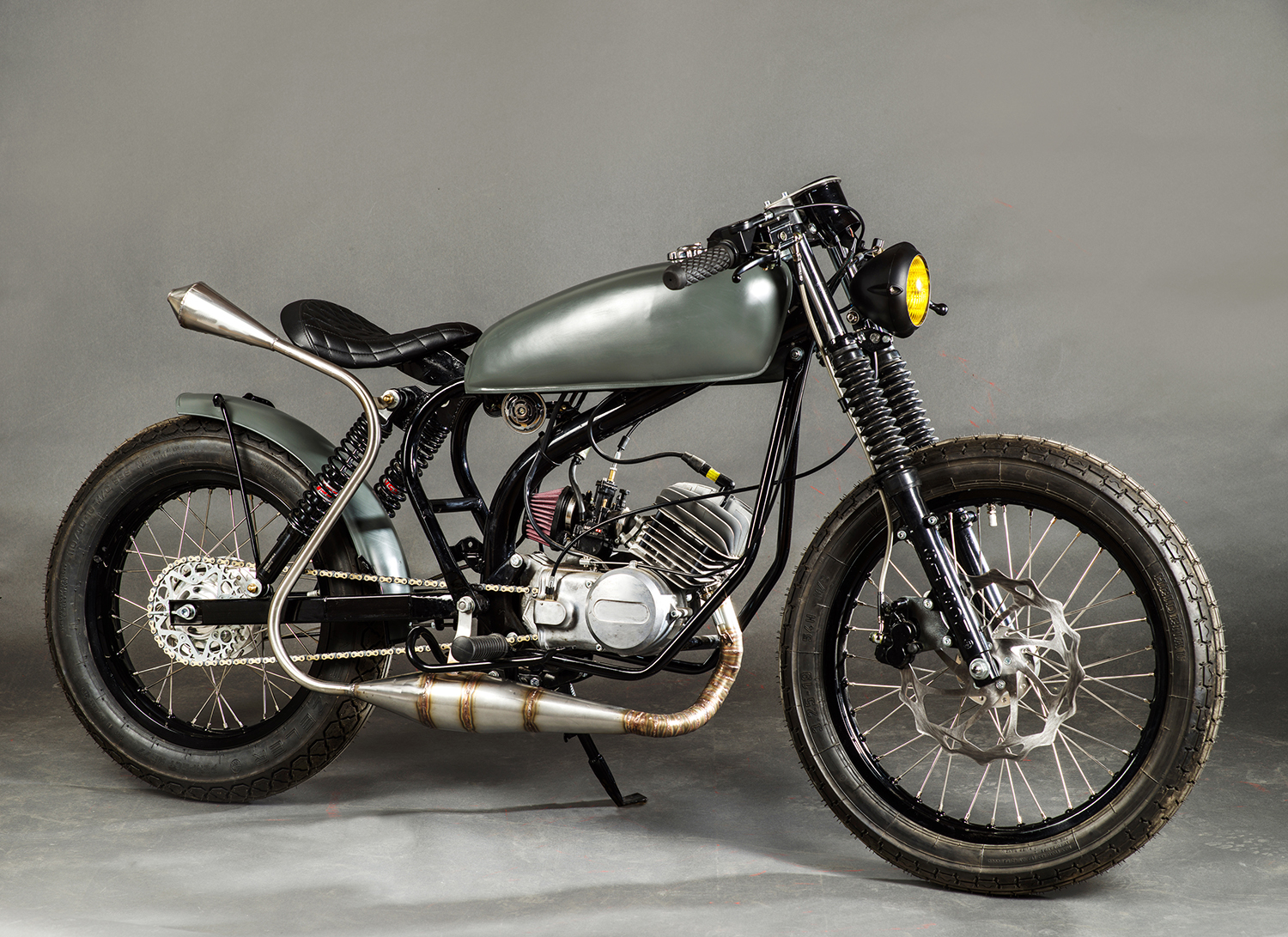 Age, as they say, is just a number and today’s feature bike shows coming from a very different period in time is no barrier to forming the perfect combination. The now defunct Simson & Co. was founded in 1856 and would go on to produce, guns, cars, and motorcycles like this 1979 S50 two-stroke. The former East German company didn’t survive long after the wall came down, but born into a unified Germany, 23-year-old Jonas Ahl saw the hidden potential in the little bike from a bygone era. Built as his first custom, he honed his skills on other machines in his Ahl’s Garage, before returning to the first bike that captured his heart and created this sweet little cafe racer with character to burn.

Two years after buying a small stake in a steelworks, brothers Löb and Moses Simson had their own factory in Suhl, Germany. Beginning with the production of barrels for firearms, they moved into bicycles, produced a car with a 3 litre six-cylinder engine called the Supra long before Toyota, and finally made their way into motorcycles. The Jewish family was forced to flee the country in the ’30s, but their name would remain attached to the brand for decades more. While the small mopeds and motorcycles produced largely in the ’60s still retain a cult following to this day.

For Jonas, 2018 saw him head off to study mechanical engineering as an army officer at HSU and of course, he had to have a bike! “I bought an old GDR Simson S50 moped from 1979. The main reason I bought it was because in Germany you are allowed to drive these kinds of bikes with a car license and additionally they are easily serviceable and considerably cheap to customise.” The bike was built and two more, a DR650 and CX500 were to follow. But writing his thesis inspired Jonas to come back to the little bike and it was time for a reincarnation.

“The first thing I built was the rear frame it was the most complex part of the whole build since I had to bend and weld everything by hand.” Next, to accommodate beefier tyres the swingarm was chopped and extended by 6cm while still retaining a sprung rear end rather than go down the path of a hardtail. More chassis modifications were to come and in the end only the neck, centre tube and 15cm of the upper remain. The subframe was swapped out for one from an ‘Enduro’ model and then Jonas built the floating seat support based on sketches he’d done in class.

With it all painted up black those bigger wheels could go on and the inch wider rear now accommodates a Metzler 110/90/16. That’s beefy on such a little bike and to get the look he was after Jonas then ditched the 16in front and laced up a 19in wheel wrapped in a vintage styled 90 section tyre from Heidenau. “Luckily the Simson Mopeds have a huge fanbase in Germany so I was able to get a rare original Simson front fork for a disc brake assembly.” Jonas then fabricated an adaptor to fit the caliper that clamps the big wave pattern disc that adds some modern flair.

The rear suspension had to accommodate the rear end changes and a set of shocks from YSS has the S50 riding like never before. Turning to the internet and a universal rear fender and fuel tank were purchased online. First, a set of struts was made and the tank fitted up before Jonas decided to teach himself to paint. Being his first go, he wisely chose a single colour and the utilitarian look is the perfect match for the bike. The yellow lensed headlight adds a little pop and paired up with the axle mounted tail light continues the theme. While the diamond-stitched solo seat completes the visual transformation.

But for his thesis he needed to sink his teeth into the mechanicals and the stock 3.5hp was about to get a serious bump. The 50cc engine had the capacity increased to 85cc and a reed valve conversion fills the cylinders. To provide the extra fuel a modern carburetor was chosen for improved tuning and fitted up with a nice large pod filter. The exhaust was designed on CAD software but not happy with the first incarnation, Jonas decided to use the COVID lockdown to make a new system. Stainless from front to back, the handbuilt system is a work of art, from the big expansion chamber to the barking mad muffler at the rear.

Yes, it gets hot, but our man in Germany is a solider and built tough enough to handle the heat. With the engine now producing 15hp, the stock 4-speed gearbox was never going to handle the power and the engineering student had more material for his thesis. Back to the computer and he designed a 5-speed swap that fits neatly into the factory case, with the ratios optimised for the engine’s new powerband. The electricals have all been converted from 6v to 12v and all the components neatly hidden under the tank. We’re not sure the German authorities ever envisioned a transformation like this when they allowed anyone with a car license to ride a Simson S50. But Jonas is already pushing the limits in his small Ahl’s Garage and this little screamer is a sign of much bigger things to come.