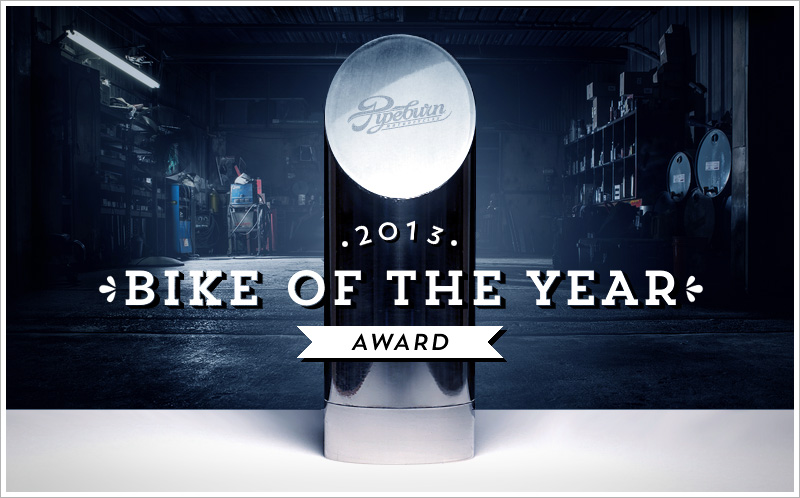 2013 has been a massive year for Pipeburn. We’ve got six times the eyeballs looking at the site now than we did this time last year. And on top of that, we’ve had an amazing run of great bikes. They were easily our best ever. So to celebrate, we thought we’d end 2013 on a high and introduce something that we’re calling the Pipeburn Bike of the Year Award. See that 2kg trophy of perfectly machined and polished stainless steel in the picture above? That’s our way of giving a little back to the scene and recognising the bike and builder that has defined 2013. So we’ve gone back over every bike to count comments, tally Facebook likes and measure absolute coolness to come up with our top 10 for 2013. The bike in the No. 1 spot takes the trophy. And what a bike it is… In the number 10 spot is a moped that is easily the most detailed, well-though-out and polished ‘ped build we’ve ever seen. Owner Matt poured his heart and soul into it and took on some serious engineering challenges, including modding the engine and electrics to run backwards for the bike’s transmission. And then he gave it away in a raffle. Crazy? Possibly. Genius? Definitely. This one came way out of left field. Or should that be East Field? Ivaylo, the man behind Bulgaria’s Galaxy Customs, had one thought when he commenced the build; he wanted to create something that was retro on the outside and modern on the inside. Not only did he manage that in spades, but he’s also beaten BMW’s top designers to the punch by pre-empting their brand new R nine T model by a good 12 months. Impressive stuff. The Bees bikes are a perennial favourites of ours, and this year Emmanuel has really managed to blow us away. Effortlessly making the transition from motocyclettes to bigger, bolder builds he dropped this one on us in March. Only the best of builders could take a classic like this and make it better than when they started; which is just what he did with a little help from Jake Hall at HCV Motorsports. Have they done a deal with the devil at midnight? We like to think so. From one classic BSA to another; this one is almost a quarter century younger than the bike in our No. 8 position, yet somehow it manages to look like it’s Grandpappy. It’ll come as no surprise, then, that owner Mike’s main inspiration for the build was his Grandmother’s bike ridin’, roller-derbyin’ exploits in the 1930s. Using your granny as a creative muse? Now there’s a Pipeburn first. There’s not much to say about Doc’s Chops a.k.a. Greg Hageman that hasn’t already been said. He was the builder at the pointy end of the Yahama Virago trend that turned the model from a customiser’s bad joke to a bike lover’s wet dream. And this one is in all black. With a number board. And gold lettering. There’s a reason why there’s a Yamaha Virago in the Pipeburn garage, and we call that reason ‘Greg’. It seems that nothing gets our reader’s blood pumping more than a well-executed BMW build. And this bike takes ‘well exectued’ and shoots it to the moon. There’s not one part of this bike that hasn’t been worked to within an inch of it’s life; the seat looks like it was made by Louis Vuitton. It even has it’s own bespoke labeling. It’s another bolt from the blue of Eastern Europe’s burgeoning scene – this time it’s ER Motorcycles and their main man Blaž Šuštaršič with a bike they call ‘The Mobster’. This is the bike that took the 2013 AMD Custom Bike Building World Champion’s title. What more can we say? Don Cronin, Medaza’s head honcho, now gets to call himself the best custom bike builder in the world without an ounce of irony, boastfulness or dishonesty. How cool is that? If movies shaped your childhood as much as they did ours, then there’s no doubt that you’ll have a special place in your hear for the original Star Wars trilogy. As die-hard bike lovers, the closest you’ll come to motorcycles in that galaxy far, far away were the Empire’s Speeder bikes. And the closest you’ll ever come to riding one is this amazing build by Jakarta’s Indra and his Thrive Motorcycles. The force is strong with this one. And again! You know you’re doing something right when you can turn out two killer bikes in the same year. Which is just what Blaž and the boys at ER Motorcycles have done. But just how killer is it? You’re now looking at the bike that holds the all-time Facebook likes record on Pipeburn. 4,300 likes to be exact. That’s so many that we almost gave it top honors by default. But there was always one bike that was up to the challenge… It’s rare to say that a bike has changed the way you think about custom builds. As amazing as all the other bikes on this list are, it would be difficult for them lay claim to construction techniques that break new ground. This bike can. It isn’t so much about thinking outside the square; it’s more about taking everything you know about squares and setting them on fire. Twice. You may know him as Max Hazan from Hazan Motorworks, but we’d like to refer to him as the inaugural winner of the Pipeburn Bike of the Year Award. Congratulations Max! We will be in touch and hope to get the trophy over to you as soon as possible.

We’d also like to take this opportunity to thank everone who helped us make this award happen. Massive thanks to Paul McKinnon from Evolution Motorsports in Sydney who made the amazing trophy for us. His workmanship and attitude is second to none. We’d also like to thank Junior Burrell at Retro Moto who not only let us use his photo for the first image in the article but who also missed out on a top 10 spot by this much – as did Russell Mechanica’s BMW, Sur les Chapeaux de Roues’ CB750 and Rajputana Custom’s Royal Enfield. Oh, and Craig Johnston’s Kermit.

We’d also like to express our heartfelt thanks to all the builders, readers and fans who supported us in 2013. We couldn’t have done it without you. See you in all in 2014.