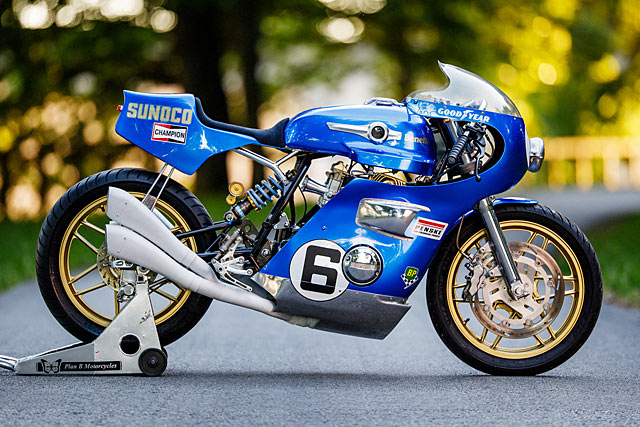 While the ’60s and ’70s produced many of the motorcycles that would go on to be part of the custom motorcycle revival we live through now, it was also the golden age of sports car racing. The period is remembered by most for the early dominance of Ferrari and the famous fight back of Ford’s GT40. But for many proud Italians, the short-lived Ferrari 512M holds a special place in their hearts and Christian Moretti of Plan B Motorcycles wanted to pay it a fitting tribute. So when the right customer came along with another special Italian of the era the planets had perfectly aligned. It’s no replica, they prefer resto-racer, a Benelli 354 sport built as a tribute to the 512M with raw Italian pride. The donor bike had been owned by the customer for more than 20 years, a beloved old friend who’d sadly spent more recent times gathering dust. It presented Christian the opportunity to build “an Italian bike to celebrate an Italian car. Just a notch of patriotism is not so bad every once in a while,” it was too good a chance to pass up. As he describes it, the drive and vision was to create a total “celebration of a very important and iconic machine, the Ferrari 512M Endurance car, a milestone in racing technology, projected in today’s two wheels world.” In fact Christian has modelled the bike on a very particular race car, the 1040 chassis numbered vehicle that was owned by American racing powerhouse Roger Penske. This would provide the inspiration for the colour scheme and also the use of a variety of particular materials in the construction, the very same improvements Penske applied to his spec’d up Ferrari race car. To make this a reality, simply making cosmetic changes would never be enough and Plan B has never been known for half measures. So with the bike stripped down Christian got to cutting. First off the bike was the entire rear end, with the factory subframe removed and the twin shock setup tossed aside. With the stock front of the frame retained it was cleaned up, smoothed out and given the tabs it would need to locate the bodywork to come. Then Christian began the process of hand fabricating the beautiful and lightweight aluminium tubular subframe to support the race seat. With welder in hand and a design in his mind he set about the task of crafting an all new swingarm that would convert the bike to a single shock setup and improve the Benelli’s geometry.

The work is simply flawless, the sort of high-end fabrication skills that Penske himself has always demanded from his engineers. Taking on the job of the new mono-shock is a custom item from Gears Racing that is adjustable for all parameters. To bring the front end into the modern age Christian made a left field, but well thought out choice. Taken from a Buell M2 Cyclone the entire suspension and brake setup is an enormous improvement. “The big 340mm rotor with the six pot caliper fits well on the 18″ wheels, which at this point are the only thing left from the original bike.” Mounted to the wheels are a set of sticky Avon tyres that give a vintage look with modern performance qualities. But this was just the start of transforming the visual appeal of the bike. The race styled gas tank is made from 0.8mm steel, with two windows on the sides to keep an eye on the fuel level; as well as acting as a brilliant custom touch. The tail section and the upper part of the fairing are made from fibreglass, while the bellypan, the big air scoops on the sides and the rest of the components are aluminium. This is exactly how the Penske team did it and the paint scheme is an incredible tribute to the 512M that took pole position at the Daytona 24 hour in 1971.

[superquote]“Still a transverse four cylinder in stock form, it delivers nearly twice the horsepower and a hell of a lot more torque.”[/superquote]

The engine also has more in common with the 5 litre Ferrari than you might think with Christian pulling the 345cc motor out and swapping it for the 500cc version instead; keeping the five alive. Still a transverse four cylinder in stock form, it delivers nearly twice the horsepower and a hell of a lot more torque. But not content just with more cubes, Christian pulled out the die grinder and gave the head a thorough port and polish before bolting it back onto the rebuilt engine. While providing the spark is now in the hands of a Dynatech electronic ignition, replacing the old points system that was about as effective as a candle on a windy day. With the Benelli banger now capable of ingesting far greater quantities of air and properly lighting the fire the next step was to fuel the flame. The asthmatic 20mm factory carbs were swapped out for Dellorto units, flat slides for snappy throttle response. Dressed up with beautifully machined velocity stacks and polished they look just like the throttle bodies fitted to the factory race cars of the era. But it’s the exhaust that takes it all back to the seventies in the best possible way! The complex 4-1-2-4 system provides optimal scavenging for power throughout the rev range. While the four HP Corse hydroform mufflers, all ceramic coated in white, is straight from the Le Mans paddock. The unusually shaped clip-on bars give the Benelli’s rider perfect control and with a set of custom rearsets get arms and legs tucked in nicely. Modern warning lights allow the rider to keep an eye on all the vital signs and instruments are kept at a minimum with just a tacho and lap timer crafted from a combination of an old watch and modern electrics. “Due to the new gizmos and the electronic ignition, all electrical wiring was built from scratch and needed some safety features to prevent disaster. It was a bit of a headache, but at the end nothing exploded and I still have a half full fire extinguisher in the workshop,” jokes Christian. [superquote]“Electronically controlled from the cockpit, the factory side stand emerges like magic from behind the fairing.”[/superquote] To finish out the build he had one final trick up his sleeve, half the result of a bet and half as a demonstration of his enormous skill. The 512M retro racer will be used on the street, perfectly legal with the headlight and tiny tail light addition. So with no team mechanic running around after the owner with a race stand in tow, Christian has provided the solution. Electronically controlled from the cockpit, the factory side stand emerges like magic from behind the fairing. To create such an impressive tribute to one of the world’s most iconic race cars is an epic Italian tale. That Plan B Motorcycles built the Benelli all as a one person operation makes you marvel at the man as much as the machine.