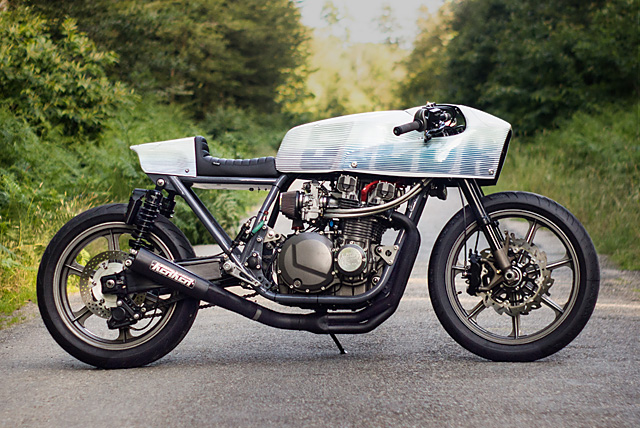 There is something about the Glemseck 101 1/8th mile sprint that brings the best out of so many builders, static competitions are one thing, but when the rubber hits the road everything on the bike is truly tested. The German motorcycle festival draws massive crowds of up to 75,000 people and is billed as “the meeting point for international designers, engineers, developers and their bikes.” For Yann and Manu of Sur Les Chapeaux De Roues in Brittany, North Western France, it was a chance to create a truly unique machine that showed off their full array of skills. But their Project Z Kawasaki is more than just a bike for competition, in the true tradition of Hot Rod Motorcycles it can do it all, win trophies as a static display, give a perfect ride on the beautiful back roads of Brittany and then go to the strip and lay down a great number in competition; our two French friends are simply brilliant at everything they do and this is their creation. The pair came to meet when Manu was working in a big motorcycle dealership in Rennes and Yann was applying his trade as a spray painter at a car body shop by day and as a street artist by night. But both men desired something more, a change from the mundane tasks of working on standard vehicles and a place where their full engineering and artistic talent could be expressed. Together they decided to form their own small garage, and with Manu’s Grandfather giving them use of an old pig barn it was the perfect place to set up shop. In many ways their operation is a throwback to times gone by; two young men in trucker caps and dirty overalls, the walls decorated with parts and old school memorabilia and all the work is carried out in-house, largely using techniques that have been with us for a 100 years. For Project Z, Yann sat at his small table in the corner and with just a felt tip pen and a piece of paper hand drew the entire design for the build. To get the project underway, a rough as guts 1979 Kawasaki Z1000 ST was picked up. So rusted and busted was it that a blow torch was required to remove many of the larger bolts. But this was of no concern, as the only parts to be used were the frame and the tank. Stripped of absolutely everything else, the old bare frame was cleaned up, sanded back and the entire rear section cut off. With just the tank then laid on the backbone, it was from here that Yann’s drawings began to come to life.

“The design of the bike was inspired by an old Cadillac from 70’s, then we’ve created aluminium bodywork from scratch.” It started with Yann taking a measuring tape to get his dimensions and then with body hammer and sandbag he began beating sheets of raw aluminium into shape. It’s a labour intensive process, slowly getting the shape and then offering the panel up to the bike before pounding on the metal again. But even unpainted, the finished front clip fairing and tail section that combine with the tank to form the body work look incredible, totally handcrafted and arrow straight. Being a spray painter by trade it was down to Yann to apply the paint, and up close the bold white with multi-coloured pinstripping work is incredible. But as Manu explains, there is something even more special to it than just a show quality finish. “Yann’s painting skills allows us to make new and original designs, and here, we go for an optical illusion, where you can read SLCDR if you’re far enough away from the bike.” With the major aspects of the look taken care of the little details don’t miss either, the seat is the only part of the build not done in-house and the black rolled leather fits into the bodywork just right and the dark hue works amazingly well with the custom paint. The large front opening is filled with a small projector light that is surrounded with an industrial gate like front grille finished in black and the opening above left for a little something special Manu had up his sleeve. While Yann hand been busy with panels and paint, Manu was over at the bench working on the mechanicals and although they normally leave their bikes relatively tame in the horsepower department, this build was all about more ponies and being competition ready. Starting with an 1100cc Kawasaki GPZ block the decision was taken to follow the old adage there is no replacement for displacement and Manu managed to take the engine out to 1200cc. For him it was the hardest part of the build but with high-compression Wiseco pistons, big valve cylinder head and racing profile camshaft on board the short block is something special. To fuel the thirsty big block, Manu fitted up a bank of four 42mm Mikuni flat slide carbies that all draw air through their own individual K&N filter. Kerker exhausts has a long history of R&D for Kawasaki’s, so their 4 into 1 system in ceramic black with a single high flow rear muffler made perfect sense for the build. But before the engine was dialled in and given a final tune for maximum power, there were still a few special touches to come. The first is an engraved side cover from a good friend of the boys ‘Stick Your Cycles’ who marked in the company name in a design drawn up by Yann. The final touch is a brilliant piece of form and function that utilises the opening Yann left in the front fairing; here Manu has mounted the engines oil cooler for maximum air flow, with braided lines running back to the engine. To get all that power to the ground and reduce twist the wheel base has been extended with a longer swingarm from a Yamaha XJR1300. Controlling the new rear end and allowing for fine tuning is a set of big dollar Martis remote reservoir rear shocks. Such a comprehensive rear end deserves a lot more than the original skinny forks and a set of rebuilt 2006 ZX10R units get the job done in style. To bring the whole show to a halt has been made a lot easier with some excellent sponsors on board, one being Beringer Brakes. One of their high quality master cylinders sends power down new lines to the big pot calipers that clamp a set of wave rotors. Out back the XJR setup with a drilled rotor and underslung caliper for quick wheel changes is powered by a new Brembo rear master cylinder. This, along with the job of clicking gears, is taken care of thanks to new custom rearsets that are mounted as far back on the frame as possible for a tucked in position. The steering duties fall to adjustable position aluminium bars thanks to e-Nov and with just the custom levers and new grips the rider’s office is all business. Having replaced the gas cap with a recessed pop-up cap, Yann took a similar approach with the Motogadget speedo that is frenched into the body work for an ultra-clean fit and finish. The rolling stock was given a coat of Bronze paint before being adapted to fit to the modern suspension and with Avon tyres as part of the sponsorship team their sticky rubber wraps both ends. With the power-packed Kawasaki off the work bench and out on the road, the boys were able to fine tune the suspension and engine until they were completely satisfied and they couldn’t be happier with the end result. And neither could we, quite frankly. Customer builds can be a compromise, budgets have to be factored in, a client’s taste and desires accommodated but for Yann and Manu Project Z is “exactly the way we wanted it to be, aggressive, original, eye-catching and really powerful.” Already proving to be a rocket ship on the French back roads when it comes time to run at the Glemseck 101, the SLCDR Kawasaki will be a tough bike to beat.