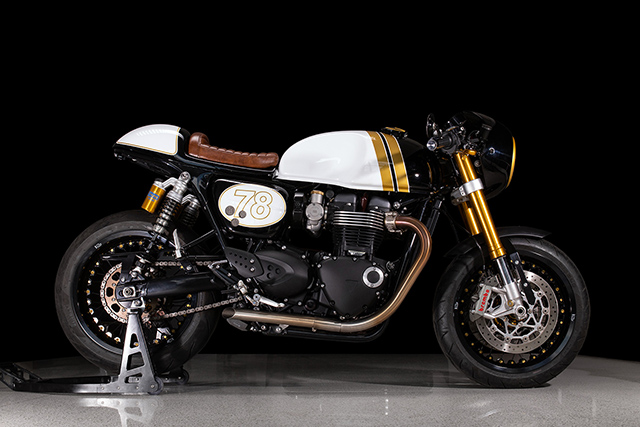 When purveyors of sophistication and style for more than half a century, GQ Magazine, were looking for someone to build them a bike to match their ethos they knew exactly where to turn. They sent a brand new Thruxton R to Adam Kay of London’s Untitled Motorcycles, a man who has built a plethora of perfectly fashioned customs over the years. It’s little wonder his skills are in such high demand but having built the GQ bike on a serious deadline, Adam is back with another Triumph Thruxton R 1200 for one very lucky client, who was seeking the perfect modern cafe classic. 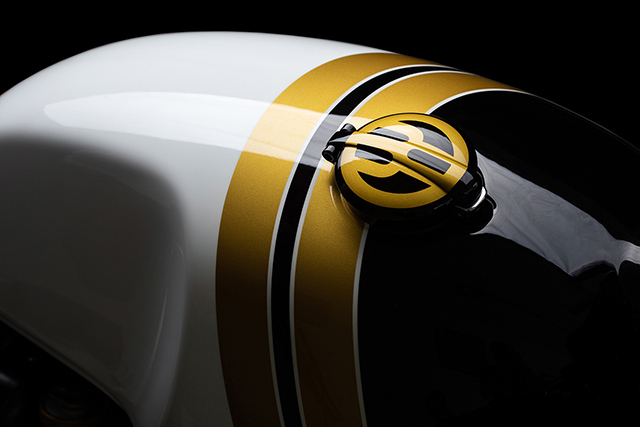 “Adam gets enquires all the time about new projects customers potentially want to do to their motorcycles. Some are classics and some are modern classics. Andrea had seen a Z750 that had been customised on the net and wanted something similar done to his Z750. After a few emails between Adam and Andrea this idea was dropped after Adam suggested test riding a Thruxton R 1200. Once ridden Andrea was sold on it and a plan was drawn up to make a classic cafe racer,” UMC tells us. 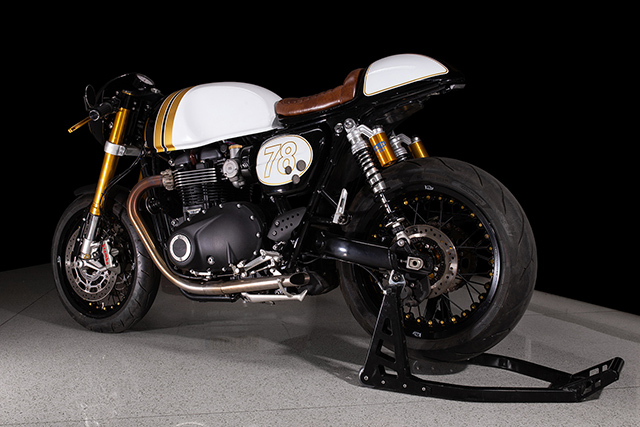 To give Andrea an even better idea of what he’d be getting and to ensure everyone was on the same page, Ian Galvin was emailed with a description of what Adam had come up with and an illustration was drawn up. “The theme of the bike was going to be black, white and gold. A classic combination of colours.” So with a plan laid out, the Thruxton was rolled into UMC HQ and stripped down to the bones so Adam could begin the visual part of the makeover. First, a bunch of parts were removed and sent to powder coat, including the swingarm that went from silver to black. 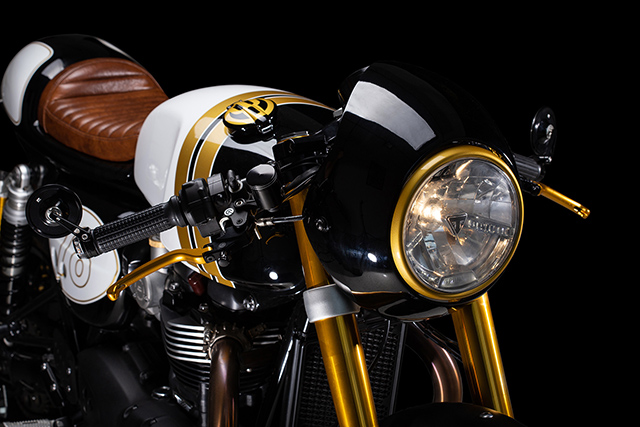 Andrea was after a particular style of seat and rear hump, different to that offered by the stock Thruxton. “Adam looked at the back of the tank and followed those lines to create the seat hump. Andrea wanted the seat to be easily removable so the original unit was adapted to create the seat. The release key could still be used and another duel seat was also made to allow Andrea to take his girlfriend on sunny day rides.” With the stunning vintage leatherwork taken care of by UMC’s go-to man, Glenn Moger. 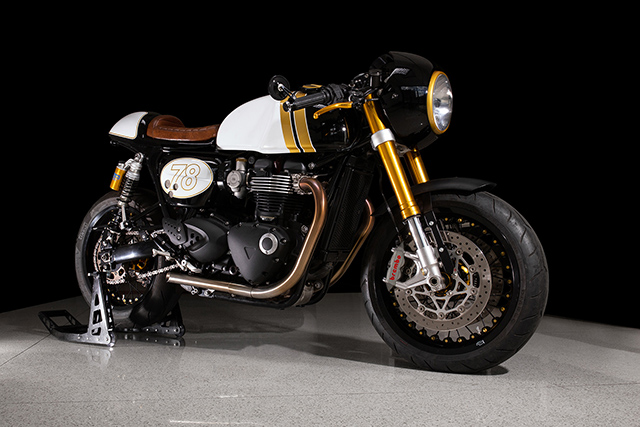 The front cowl was also made in house, just like the seat it is the result of one-off plastic moulds, a lot of fibreglass and endless hours of hand finishing. One of the aspects of Adam’s builds that is so impressive is the factory level of fit and finish. But to complete the changes at the front would require some outside help. Modern electrics can be a minefield and with the Thruxton’s brains hidden in the factory instrument cluster removing them disables the bike. Unless of course you have a wizard like Steve Hallam who can hack in and make it all work with outside vendor products. 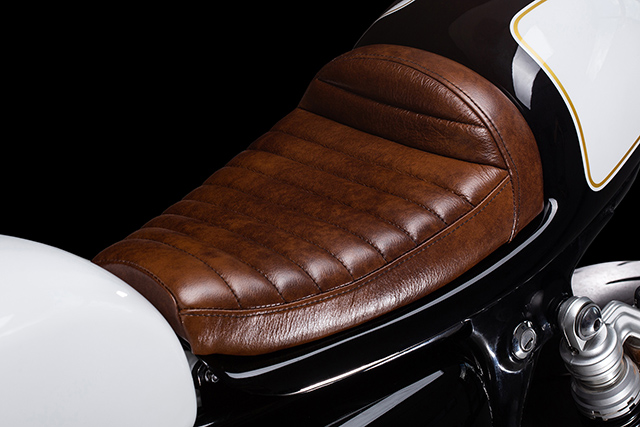 Just like on the GQ bike the factory top yoke was modified to include an integrated speedo mount to hold one of Motogadget’s beautiful units. Taking care of the machine work was Danny from Fast Tec Racing who customised the yoke and had it anodised black. Beneath, the clip-ons were replaced with racier items and the switchgear changed for 3 button black units. The wiring runs through the bars to motogadget indicators, while out back things have been stripped down and a fabricated mount was made to fit an Alchemy Parts rear tail light with integrated indicators. 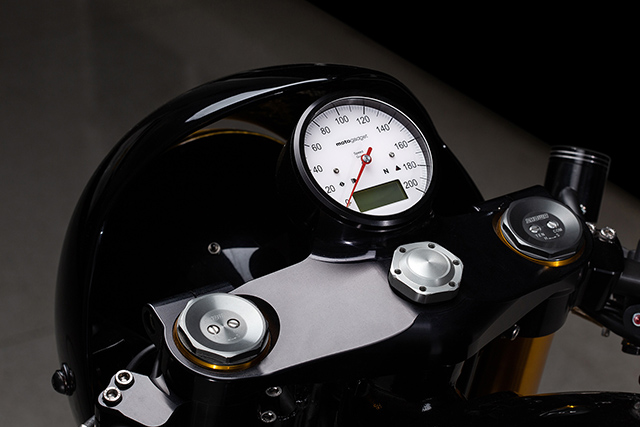 From the start, Adam and Andrea knew that the paint job would be vital in bringing the whole look together. “Adam has been using Image Design Custom for a while now and they always delivery the goods,” UMC explain. With the Thruxton being no exception, they’ve knocked it out of the park, right down to the incredible detail on the fuel cap. While a set of Kineo wheels not only matches the look in black and gold but also helps to reduce unsprung weight to improve performance all round. 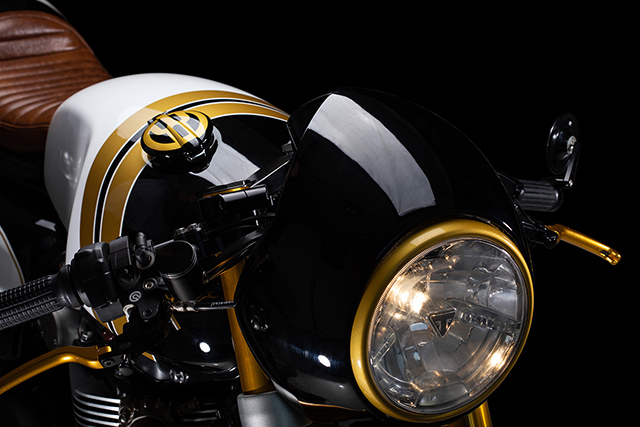 The Thruxton R is already one of the most impressive modern classic performers, with its factory equipped Ohlins and Brembos. While the 1200cc liquid-cooled parallel-twin offers up thunderous torque, Euro compliance means it could always sound better. So Adam removed the factory silencers and fabricated a set of drag tubes with slash cuts to direct the hot gases away from the rider. On first showing the Thruxton was a hit at the Bike Shed Show and understandably Andrea is already racking up the miles on his rolled gold UMC special! 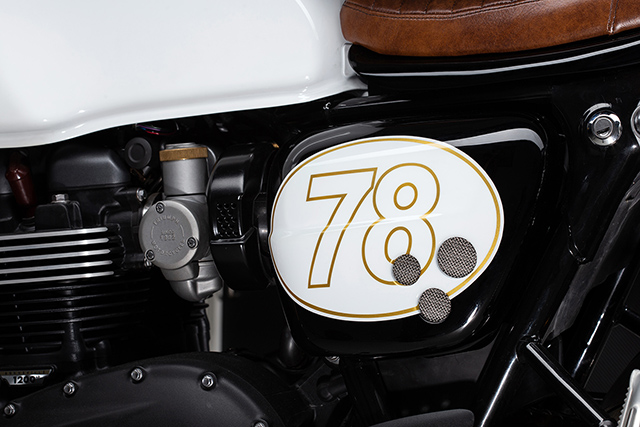 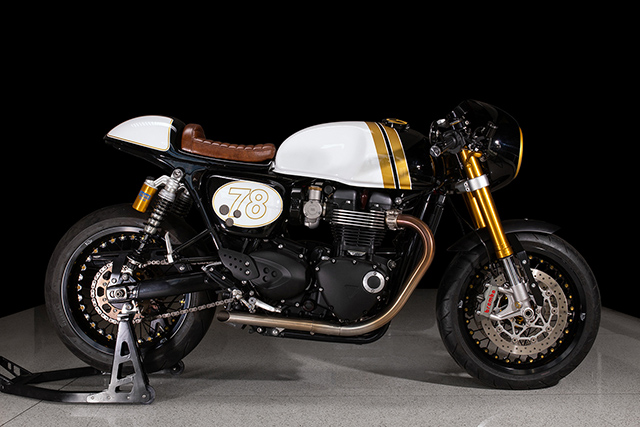