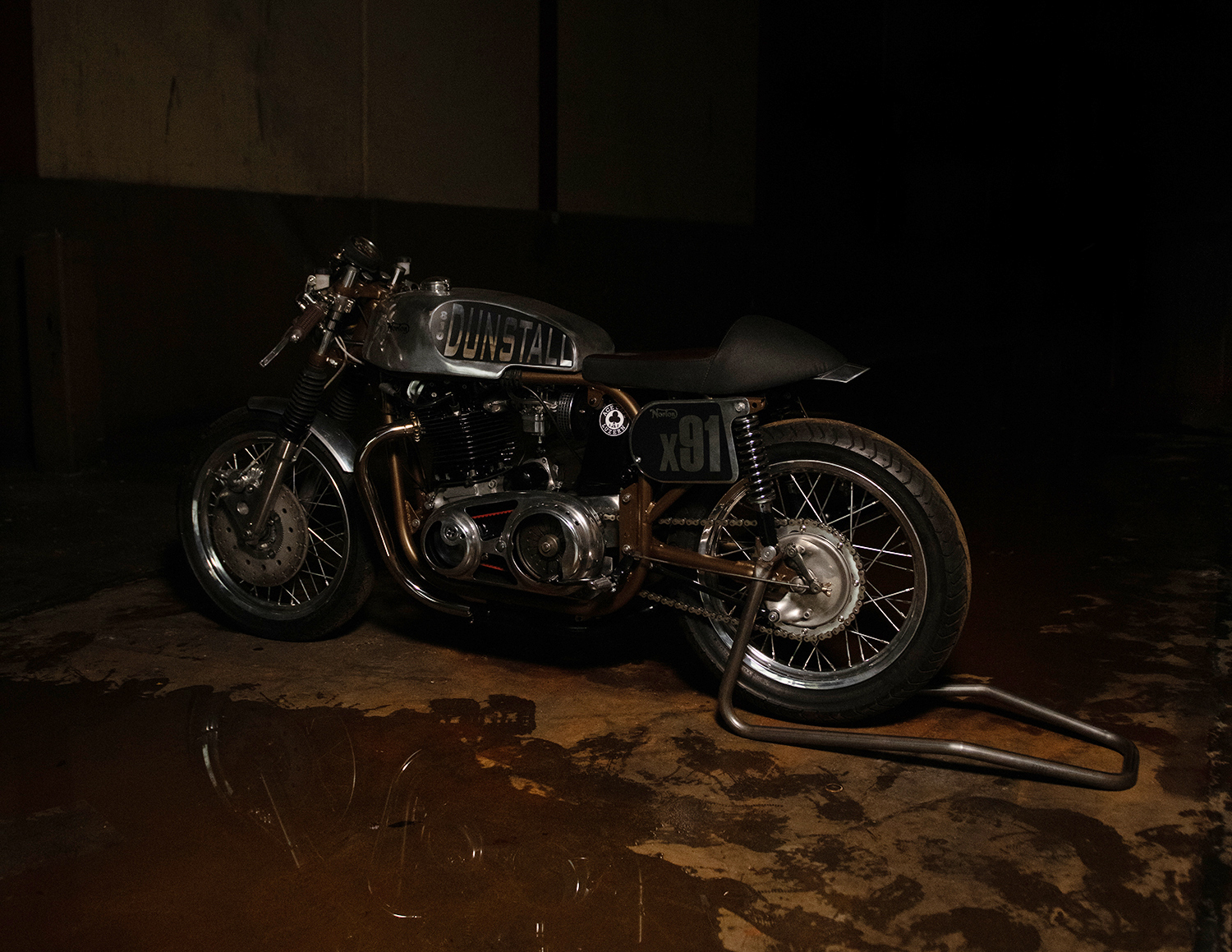 For such a well known brand with a long history of racing success and desirability, Norton sure has had its ups and downs. The companies latest collapse has left many angry customers out of pocket, but those seeking to find a silver lining will look back to a time when some of the makes best models came from its darkest times. For Serge Lindemann, motorcycle designer and owner of the Custom/Import Garage in Gersau on Lake Lucerne, one such bike stands alone. And no stone has been left unturned in ensuring his remake of a 1971 Norton Dunstall 810 lives up to the lofty expectations the marque has demanded for more than 100 years.

In 1902 James Norton began producing motorcycles in the English city of Birmingham and just five years later his bikes were winning races at the Isle of Man TT. But as would be the pattern of the company until the present day, it wasn’t long before the creditors were left holding an empty bag. Win on Sunday, sell on Monday has been a catch cry in the automotive industry since it began, but somehow those managing the Norton company have always found a way to turn success into failure, even while producing the best of bikes.

So when the Birmingham factory was closed in 1962 and moved to London, a young racer and customiser took the chance to buy up many of the leftover parts and launch his own brand, Dunstall Motorcycles. But Norton wasn’t new to Paul Dunstall, at just 18 years old he was already modifying, racing and winning on the bikes he’d lusted after as a small child. Still in his early twenties, he joined the family scooter business and by 1961 he’d produced his first catalogue, filled with custom parts of his own design.

By 1966 Dunstall Motorcycles was approved as a manufacturer in its own right, allowing the company to enter factory racing, with wins at the Isle of Man and a domination of the British racing circuit that saw Ray Pickrell take home 17 wins in one season. The success fuelled the business with Dunstall’s customers able to choose from a catalogue offering a range of speed parts, race-styled accessories and complete ready-modified bikes from Norton, BSA, and Triumph. When the ’70s came Dunstall saw the writing on the wall of the British industry and turned his attention to Japanese bikes.

But not before he’d released the factory hot rod of its time, the 1971 Dunstall 810. A ton-up boy in his youth, the bike was independently clocked at over 125mph and capable of laying down an 11-second ¼ mile. The bike you see before you was imported from Germany by Serge and sat for a while awaiting his attention. But rather than build the bike back to the original spec of the ‘sleeper’ look factory superbikes, he opted to give it all the go-fast bits those bikes came with and a look that truly is the best of British racing.

Starting with a genuine 1971 registered frame, the bike was stripped down to every single individual part. Many have lived a hard life and a quality restoration doesn’t allow for leaving hidden gremlins lurking behind. The unmistakable frame no longer wears the stove paint black and has instead been finished in a hard wearing deep bronze look. Sitting on top the tank too is changed to suit Serge’s desires, with a race-style aluminium unit, Monza filler and factory inspired graphics sitting where the quick to break fibreglass unit once had been.

The seat options for the 810 was as varied as the parts catalogue that Dunstall offered, with most being a street type two up unit or a cafe racer inspired single with fibreglass tail. But in another nod to the companies racing history, Serge opted to go for a more period racing piece that looks the part and isn’t as uncomfortable as some of the other alternatives. The fenders too are more inline with a bike destined for track work, with the oversized units now much more streamlined with a tyre hugging front piece and frame mounted rear. While the race plates on the side give a hint that this machine packs the full power of the 806cc race engine that is a 3mm overbore of the factory Commando 750.

Carburation was small Amals on the Commando, while the Dunstall takes advantage of 36mm Dell’Orto fuelling and new coils to fire the extra gas. A Quaife racing gearbox holds all those horses and there is nothing like an open hydraulic dry clutch to let people know you’re serious. To stop the party a disc brake is fitted from a Norvil conversion and from the stunning looks to the unrivalled performance, Serge has crafted a custom machine that truly captures the best of British. In partnership with the Ace Cafe in Lucerne, this and his other creations can be purchased and we can only hope the new owners of Norton are paying attention as they plot a path forward for the company with a rollercoaster history!