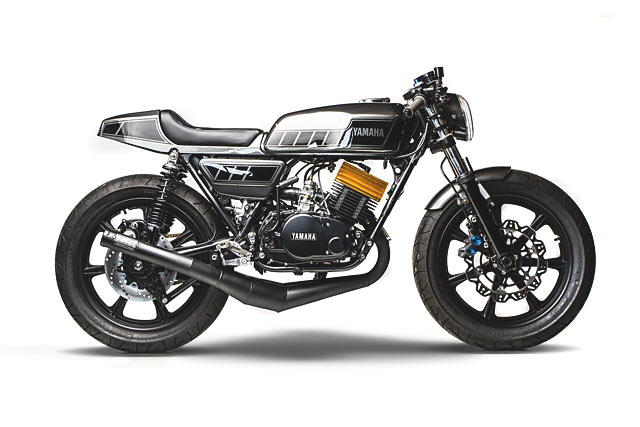 Good memories are prompted by many things, they intoxicate all the senses and nothing in the motorcycle world brings all five alive like a rampaging 2-stroke screamer. But it all means so much more when the heightening of the senses transports you back in time and the nostalgia leaves you overwhelmed. Sean Skinner of MotoRelic Custom Cycles in Hamilton, Virginia was tasked with achieving just that for his latest client, and when the droplets rolled down their face at the unveil he knew he’d hit the mark. This tear-jerking Yamaha RD400 cafe has it all and nicknamed Ruby she’ll elicit a big satisfied smile when you climb aboard and crack the throttle. The build was commissioned like any other, but Sean was quick to pick up on the significance of getting the Yamaha just right, “Ken contacted me to build him an RD400 that would have subtle cues from a bike he remembered from childhood, memories of father and son. He only had a few requests and the rest was mine for the creating.” The old smoker was rolled into the MotoRelic workshop, stripped down to its bare bones and then the frame placed on the lift so Sean could get creative, “I don’t draw and I don’t photoshop. It’s all in my head and it just flows out as I go.” With a vision emerging of what he had in mind the RD400 offers up a unique obstacle that would need to be tackled before the rest of the build could commence. The tank for the automatic oiling system utilises a side tank with the filler under the seat. Fine if you plan on using the big cushioned chair that removes easily, not so great for the sleek lines of a custom. But Sean had a solution “I removed the dipstick and original filler cap. Filled all of the holes and made a new hole for the external cap. Leaving the frame open for any design.” The new machined cap a beautiful touch!

Before commencing on the bodywork the battery was also relocated and the move allows for the neater running of wires. To prepare things for a new seat design the back-end of the frame was cut and hooped, before the whole thing was powdercoated black. Sean was determined to have the design of the tail-piece match the lines of the tank. To achieve this no fewer than 12 pieces of aluminium were cut, shaped and welded until he’d achieved the brilliant look. There’s even neat cutouts for the shock mounts and a beautifully frenched in taillight. Over the top a perfect place to call home for a comfortable ride has been created with a mix of cut foam and yoga mat forming the cafe’s seat. The flawless stitching is the work of Counter Balance Cycles who made the black leather cover. To maintain the clean look there is no rear fender, but just like a modern sportbikes a neatly hidden hugger keeps things clean. Up front things take on a more traditional feel with a hand rolled fender. While the stock tank and factory side cover have both been returned to their showroom best for a great balance of old a new. The RD400 engine is a peach, in the lower revs it’s not as angry as the smaller capacity models that came before, but wring its neck and you’ll be rewarded. There was just one stipulation from the customer about the engine as Sean recalls, “Ken had only one set of expansion chambers in mind. He remembered the sound of the DG pipes from childhood and had to have them on this bike.” And to ensure the rest of the package was just as sweet the engine was pulled down and rebuilt, repainted and given a fresh set of gaskets and seals. Topping it all off are those beautiful HVC Cycles gold anodised heads.

[superquote]“In the lower revs it’s not as angry as the smaller capacity models that came before, but wring its neck and you’ll be rewarded.”[/superquote] But where a lot of the last of the two-strokes were let down was in the handling department, their performance potential crippled by cheap and nasty components. Sean wouldn’t be having any of that here and has pieced together a brilliant package. The front end is from a 2000 Yamaha R6 offering lightweight, full adjustability and Sean has lowered them internally. The conversion made possible with a set of All Balls bearings and wheel spacers made in-house. A lucky find meant a CNC’d billet Vortex upper triple was powder coated and adds the final piece to the top quality package.

The modern brake caliper provides excellent bite, with an EBC wave rotor able to be fitted up thanks to clever machining by a good friend. The rear end isn’t ignored either thanks to a drilled floating rotor clamped hard by the rebuilt factory caliper. To match the aesthetic the wheels have been finished in black before being wrapped in Continental ContiGO tyres, a dramatic improvement on the rubber rock boots that came in the ’70s! Instrumentation is kept to a minimum but with the two-strokes revs ready to rise a Koso single tacho got the call for duty. Lighting the cafe’s way is a reproduction V-Rod headlight, but wanting it mounted tight up against the trees Sean modified a set of aftermarket brackets. With indicators a necessity to keep things road legal, fork mounted LED wraps do the job without disturbing the view. “The paint work was done by Danny Knight of Knights Custom. The all black take on the classic Kenny Roberts Yamaha scheme was just what this bike needed to cap off the look Ken had been dreaming of,” smiles Sean. And that smile only got wider when his shop was filled with smoke as the RD fired to life on the first kick. Given a shakedown and once over the keys are now Ken’s, the ruby graphic a powerful family symbol and with each moment of 2-stroke mayhem there are new memories to live on forever.