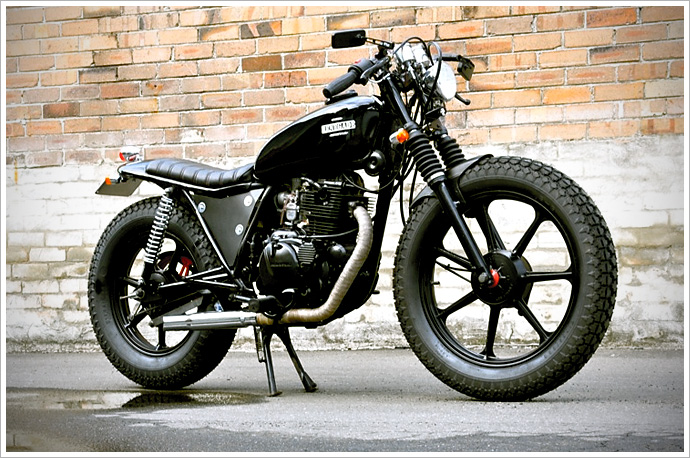 Time for a quick Arachnology lesson. You’ve probably heard of the Black Widow spider – a native of North America and famous for innumerable associations to big-boobed comic book characters and b-grade action movies. Less well known, but just as deadly is her Australian cousin, the Redback spider. Considered the most dangerous species of spider in Australia (and that’s really saying something), a bite from a fully-grown female can cause a strange burning sensation, goosebumps, malaise, sweating, fever, tremors, seizures, comas, respiratory failure and eventually death. Which is strange, because that’s just how we felt after laying our eyes on this bike built by Ren De Hass and his Renegade Customs. Except for the dying part. Here’s Ren. “I’m a one man operation, formed about 8 months ago. I had never intended to start doing it mainstream rather just make and sell, kinda for fun. But I wanted more fun, and more projects, and I figured I didn’t want to do the whole advertising on eBay every time I wanted to sell a bike, so came up with the idea of doing it as a part time gig (hence Renegade). I have mates that do a similar thing, and the revival of custom bikes thanks to cable TV and custom builders like Deus, it’s really a growing market. I build at home, I have a freakishly small shed, which is almost fully equipped, but if it’s not raining, I usually sit in the yard, on the grass and cut, grind, and paint myself into some kinda trance. Because of space I am limited to one or two bikes at a time and I never rush the builds (this one took about 4 months) so I certainly have no production line.” “I have no formal qualifications in fabrication or design. I just know what I like and I like the challenge of figuring out how to get there. For me its about the process, not so much the end result. I get stoked when customers see their finished bike and love it! But I see the beauty in what it took to get there. My wife thinks I am clever and I guess in some respects I have skill, but I reckon if you make enough mistakes and learn from them, you get really good at stuff! That’s where I think I am now.” Bike and mattress. One delivers the toxins, the other catches you as you fall

“It’s a 1985 Kawasaki Z250w Belt drive. Given to me by a guy who was sick of it sitting in his back yard for 10 years. I was told that “it was running a few years ago” Of course it was in such a bad way I couldn’t test it. Note to self; don’t do this again. The build for this bike was pretty open, the customer gave me the brief, “have fun with it Ren and I am sure I will love it.” So apart from the fun part, I decided that the machine was gonna be black with some red highlights. The customer was also a fan of red and black and drives an Alfa with a similar theme. So with a few touches here and there, the Redback was born.”

“Backtracking though, before any colours were chosen this bike needed some serious “Love.” Basically a total re-wire, and new carburettor were the starting point. The engine itself was pretty solid, which is great as I am no mechanic. With it firing away, I could concentrate on shaping and stylin’. I found a couple of great tanks from a ’79 Z 250C at the wreckers, tho they needed a fair bit of bondo, bashing and some paint. This bike was actually my first attempt at using 2 pack. I am pretty happy with it. Same with the body filler, though the tank is not 100% perfect, its close.” “I wanted to use the red for highlights, not to take over so a lil bit here and there was ok! The small section on the seat tail was enough to finish it off and in doing that, I came up with the name “Redback.” One of the hardest issues on any bike I build is finding the right shoes. Tyres can make or break a bike and with this bike it definitely makes it! I was so limited in choice with a 16 inch rear and 19 inch front and in the end the boys at Antique Tyres got me sorted with an awesome set of Firestone ANS military. For reference that’s a 5 inch tyre on the rear and 4 on the front. With rubber this fat I have no choice but to second name this bike the “Phat Tracker.” The seat was the third for me and my fibreglassing skills, I am pretty happy. I have that down now and can knock one out in a day. My first one took about 10 days.” “I wanna add that just because you get a bike for free, doesn’t mean its gonna be a cheaper project. This one was a nightmare. I still can not find a workshop manual for this bike and parts are impossible to come by. Wiring took the best part of 3 weeks for me to do and I musta gone through about a box of fuses.” We’re very much looking forward to seeing what Ren has up his sleeves for the next build. If you can’t wait until then, head on over to his interweb information receptacle at www.renegadebikes.com.au for more. Just keep an eye out for the wildlife.