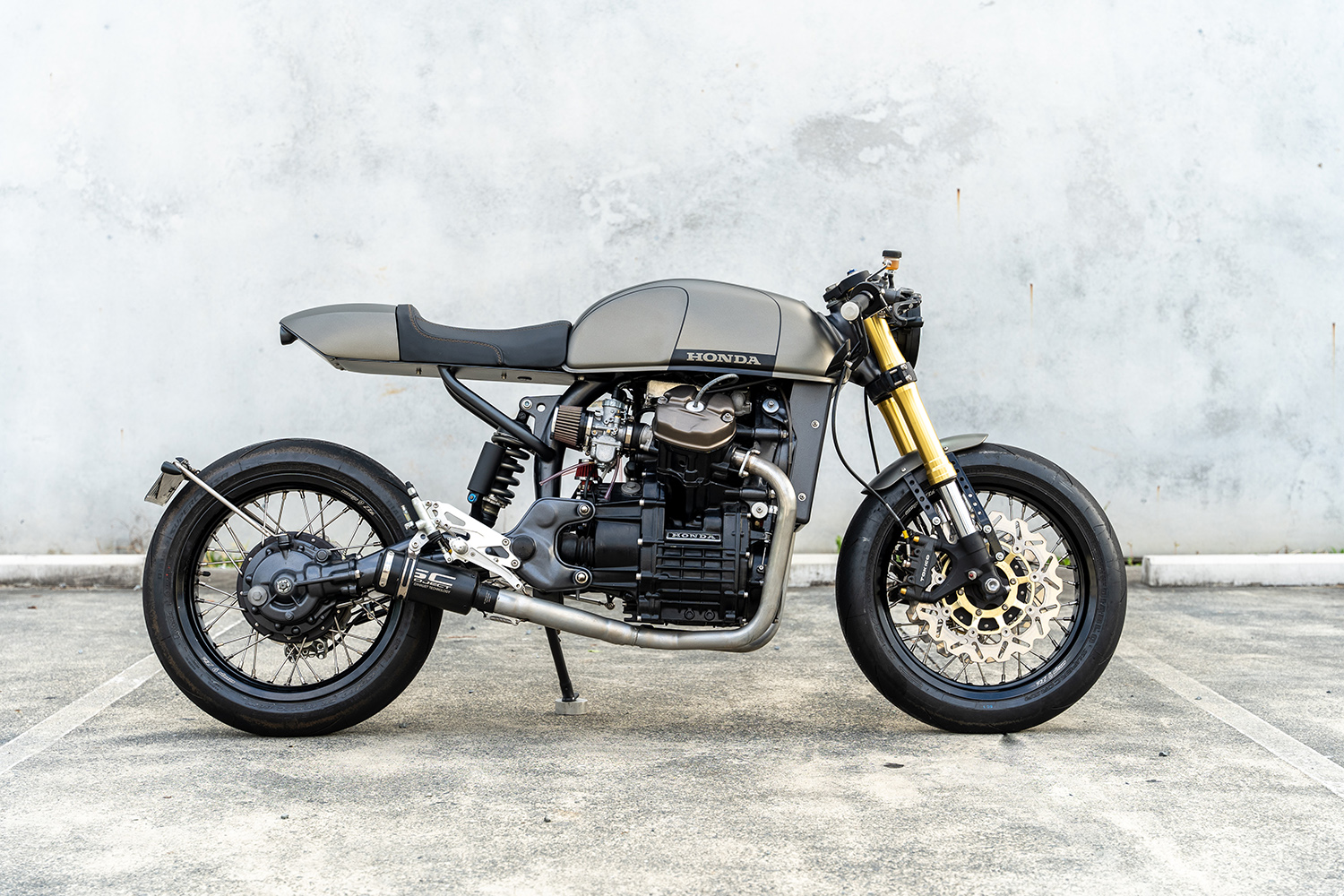 If you’ve ever been in the market for a house and been looking to save some money, you’ve probably come across a property that the agent called a “renovators delight”. What they really meant to say was that it was a money pit, with a million problems that have often been hidden under a fresh coat of paint. While most houses don’t come on wheels it was a very similar proposition for Queensland’s Purpose Built Moto, when what appeared to be an already custom built CX500 rolled into their workshop. The owner had uncovered some of the problems but it would take all of the PBM team’s skill to deliver them back a fully functional fun machine where the delights weren’t just a dream.

“The Honda CX500 Café Racer came in looking pretty nice, a lot of tidy fab work, some trick parts, and a few really expensive upgrades. As it rolled in my door I was left wondering why it was here. I asked, “So what needs to be fixed?” I was hit with a laundry list of tasks the V-twin Honda needed in order to be rideable and that was just what the owner had picked up on,” Purpose Built’s Tom explains. There was already a mono-shock conversion, USD forks had been installed, spoked wheels, electronics that had been upgraded. Problem was, it was a classic case of ‘Good from far, far from good!’

All of those modifications had problems and as Tom tells us, “That’s just running over the big-ticket items. What we had to do was make this thing work. After a thorough check over the list grew significantly.” To get the bike rolling the suspension and wheel modifications that had been done would need a total redo! The wheels themselves had been laced incorrectly and drilled the same way, so they were sent out to be done properly this time around. Moving onto the suspension and while the front was as stiff as boards the rear was a sloppy mess.

To get that nice set of USD forks working correctly in the bike, the old destroyed steering head bearings were replaced and the triple trees required re-spacing to operate smoothly. Then it was the back ends turn and while many go for a mono-shock conversion, few get it right, “you’re never going to get it right with an off-the-shelf rear shock. The spring rate required for that suspension ratio is sky-high. From experience I knew this was a custom job. A used Showa rear shock was sourced, fitted with a modified heavy-duty spring, and reconditioned with the correct valving to suit our application. Our mates at Ride Dynamics nailed this one again.”

Next on the list of items that needed fixing was the install of the rearsets, they’re a great addition to a bike, but the CX500 was never designed for such fancy pieces of race kit. Luckily at Purpose Built they’ve done this before many times and they set about building the linkages so that both the rear brake functions and clicking through the gears is a joy rather than a headache. Now that the bike was functioning there was the task of getting the electrics to do the same. Chasing problems in the ignition, the starter circuit, and generally ensuring the bike was properly wired up.

When the owner had come in they reported the seat was hard, really hard. So with Tom re-designing the tail section to something much more aesthetically pleasing he also took the time to reshape the seat so it not only looks good but makes for a pleasant place to be. Then it was over to Jamason at Timeless to do the upholstery and the stitch job is flawless. The paint is just as good with a deep satin bronze chosen for the job that really highlights the lines employed and the black accents only further accentuating the excellent fabrication.

But in pulling the bike apart for paint, Tom realised something was missing, “which it was: a catch can for the radiator! With the expansion hose just running out to the ground, the cooling system was half full after leaking out on the ground every time the coolant expanded under high temperatures. Note: you need an overflow can – even if it’s a small one. So we mapped out an area under the tank, fabricated a small aluminium catch can, and plumbed it in. Another problem solved.” With that error fixed the rest of the engine package is perfect, Mukini carbs with DNA filters and a slick exhaust system with a sporty end can.

“The lighting was sorted out front to back with our LED headlight and 3 in 1 LED blinkers, all mounted on custom fabricated brackets.” At the rear of the bike a super neat number plate bracket was fabricated and it too has its own custom lighting to suit. Frenched into the tank is a digital speedo and along with the pop-up gas cap keeps the lines undisturbed, which is how they remain across the bike, a testament to the skill of the Purpose Built Moto crew. Given a bike that had been poorly modified, they’ve come to the rescue and handed the owner back the keys to a CX500 that looks trick and rides like a treat.