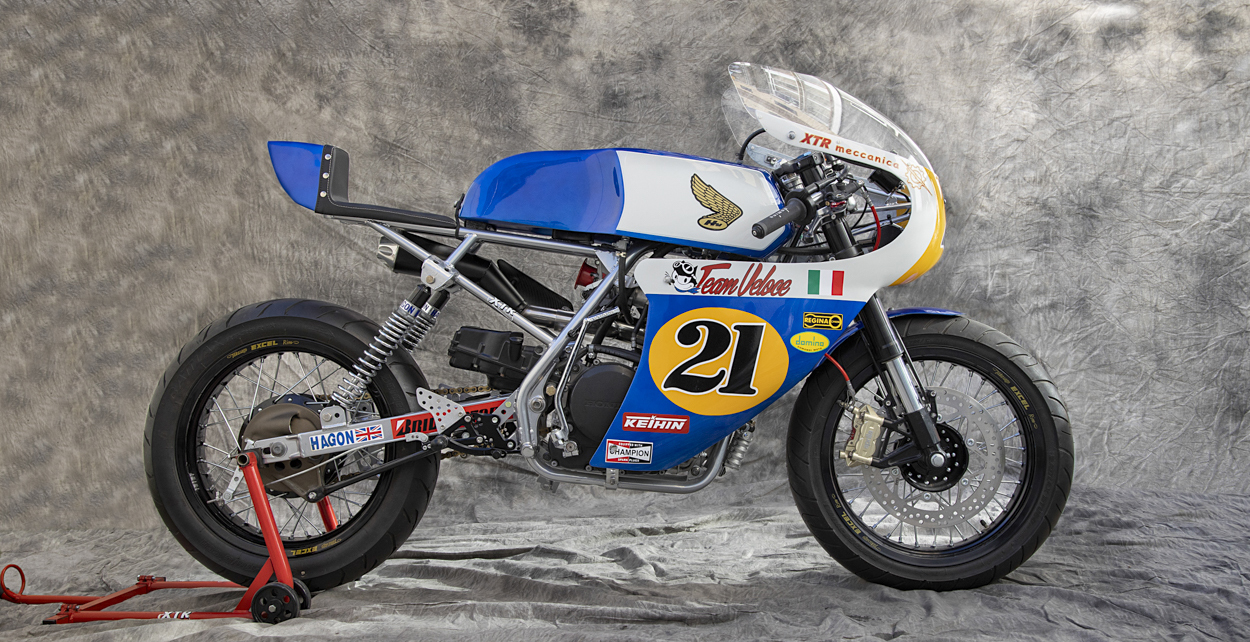 There was a time in the Motorcycle Grand Prix Championship that one weekend racers would find themselves at one of the world’s premier circuits, only to be racing on the real roads of places like the Isle of Man the next. They were a different breed, capable on the tools, often racing in multiple classes in the same day and usually in the pits next to the race fuel with a cigarette hanging out the side of their mouths. At the XTR Pepo workshop in Madrid of the legendary builder Pepo Rosell there is a deep respect for the bikes of that period and the racetracks that were often infamous for all the wrong reasons. One of the most dangerous was Finland’s Imatra and it provides the name for this 1990 Honda XBR500 that’s been transformed into a wicked road racer.

In the glory days of the period the Imatra circuit was 6km long and included a railway crossing, it’s little wonder that we don’t see the likes of Rossi and Marquez racing there. But legends like Giacomo Agostini loved the challenge, with classes spread from 125cc up to the 500cc bad boys. The Honda XBR, however, is a very different machine to those two-stroke race bikes, built as a simple single-cylinder sports bike to take on the market then dominated by Yamaha’s SR. But the XBR did have a link to that period, with the factory cafe racer version given the TT (Tourist Trophy) designation, and even came with Isle of Man graphics.

Hardly enough for our man Pepo to be satisfied, having built more incredible customs than just about anyone else on the planet. He needs more than a sticker pack and some fancy badges to get his creative juices flowing. So he conceived the idea of the Imatra, that takes the best aspects of the racing world from the 60s to the 80s, stirs in some modern parts and adds a big pinch of Pepo’s genius to create this raunchy racing replica. To start the project the design was drawn up and the donor bike was stripped right back and the motor removed. Then the frame was modified, shortened at the rear and new brackets welded on for the fancy extras to follow.

Painted up in silver the tube chassis and box-section swingarm lay the foundation and could be from almost any era. But the budget suspension on the stock bike was never very sporty, so diving into the parts bin, Pepo pulled out a set of front forks from an Aprilia RS125 that have genuine GP pedigree. With the right bearings and steering stem they slot into the frame and at the other end of the upside-down forks the axle runs through a Derbi hub. Laced up to a set of lightweight Excel rims, wrapped in Bridgestone rubber and the Honda was ready to roll.

At the rear, a drum brake assembly and hub was used from a Mash Five Hundred and provides ample stopping power. With a set of twin shocks from UK outfit Hagon, with progressive springs and bolted to Pepo’s own mounts. The front brakes, however, get a major overhaul, with an NG front rotor clamped by a single Brembo radial caliper. The power is generated at the lever with a Brembo master cylinder and runs down the red Frentubo braided brake line. Mounted well down the forks the clip-on bars give the rider the racebike feel and a set of fully adjustable rearsets allows for people of different heights to get nicely tucked in.

What they’re hiding behind is one of Pepo’s own XTR front fairings that draws its inspiration directly from the period and provides the wrap around look to a once naked motorcycle. The big clear screen provides plenty of protection and it’s all affixed with an XTR custom mounting system. When it comes to the fuel tank you can stop guessing, taken from one of the favoured race bikes of the time, the Yamaha TZ250 and modified to fit. The tiny tail is also from the Yamaha catalogue, the smaller TZ125 and provides just the bare minimum in bodywork.

To add a truly modern touch, Pepo hand formed a lightweight carbon fibre front fender that hugs the new rubber. Then while he tackled the minimalist upholstery, the bodywork was all sent off to PINTUMOTO, who as always has knocked the colour scheme out of the park. Resplendent in white and blue, with a full number package and sponsors logos, the bike could easily be mistaken by the untrained eye as a privateer entry at the old Finnish track. But Pepo wasn’t finished there, with the engine on the bench it was time for a major overhaul. In went a high comp Wiseco piston into the overbored barrel, now giving a swept capacity of 600cc with the use of a Honda XL crank.

The four-valve head responds well to a carbide bit and has been ported and polished to take full advantage of the HRC spec camshaft that was then slotted in. Fuelling the expanded thumper is the ever popular FCR39 carb with an open stack, with the ignition drastically simplified to run off a small LIPO battery. The strip down continued with more parts thrown out, the bulky electric start is gone, so to the kickstand and an uprated oil cooler added to help soothe the beast. Everything else is kept simple, the exhaust belches out beneath the seat with carbon covers and a Koso rev counter is all the feedback you get, apart from that which fills the nostrils, explodes in the ears and gives the XBR a seat of the pants racer ride like it has never had before.