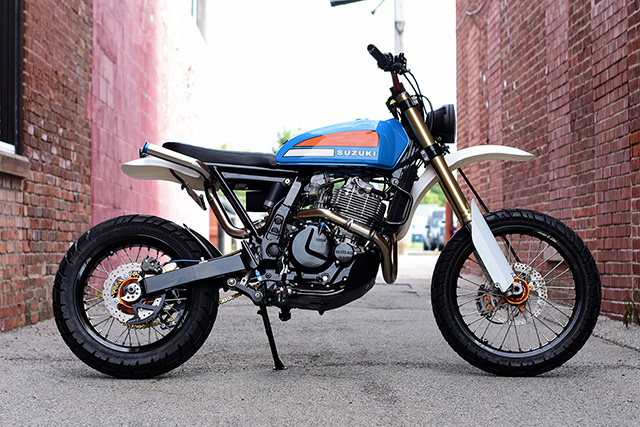 Being a one-hit-wonder has plagued many an artist and turned others into a punchline or answer in a quiz show. But having come out swinging with plenty of popularity on his first major success, Spencer of Parr Motorcycles was determined his second single would be just as strong. So with his foundations set, he’s back with an all-new spin on the versatile Suzuki DR650. Taking a 2012 model and turning it into the ultimate urban scrambler, tame or terrifying, it’s just a matter of how far you turn the throttle. 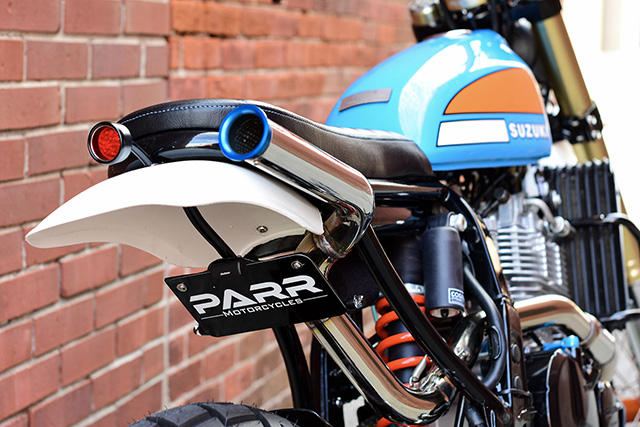 Only a few month’s ago we featured Spencer’s 2003 Suzuki DR650 that set the internet alight with its well thought out recreation into a stunning tribute to the Suzuki RM400. Working as an investigator by day and building bikes at night in his small garage didn’t stop him from producing a remarkable result. With the DR proving to be the perfect base for the types of bikes he likes to build, he went hunting for the next donor and found this 2012 with just 3000 miles on the clock. 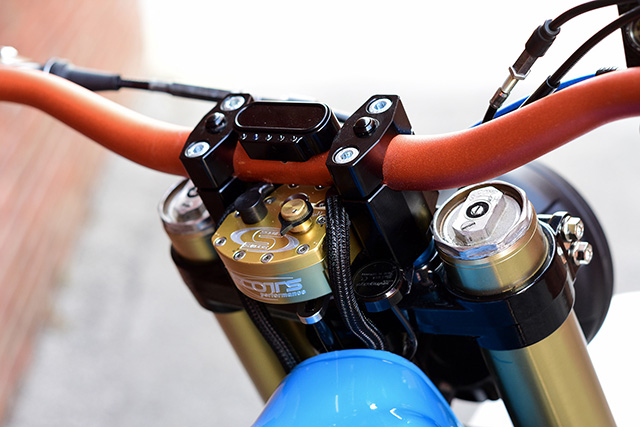 “I already knew going into the build I was going to make an urban scrambler that was easy to ride but performed at the highest level. Since retro builds seem to be my thing, the design concept for this bike comes from a 70’s Suzuki TS.” A mainstay of the Suzuki lineup the TS family of bikes was an early dual-sport; lightweight and reliable, it could provide just as much fun on the trails as it could weaving through traffic. 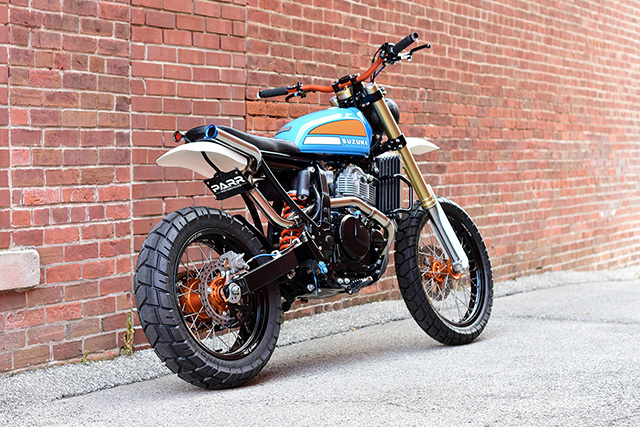 But with small capacity two-strokes now a thing of the past, the big single DR makes for the perfect base for a homage and first thing for Spencer to do was get stuck into the frame. “The bike was torn down and I chopped off the old subframe and created a whole new subframe that lowered the seating position to go with the scrambler theme,” he told us. Before fabricating an all-new electronics box that is an integrated unit hidden under the seat for ultra-clean lines. 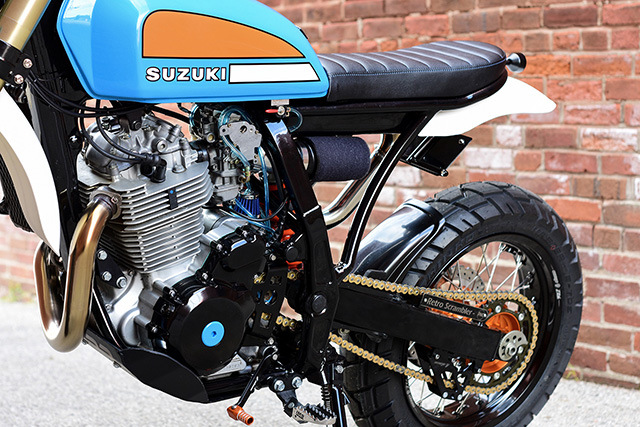 With the frame and swingarm back from powder coat, Spencer took the time to replace many of the factory bolts and bearings. “Next was to mount and level the 78 Suzuki TS250 spray painted gas tank that I picked up from Canada.” The blue, orange and white theme carries on across the rest of the bike and the colour scheme is perfect for replicating the period. With the leather seat neatly stitched with blue thread and white fenders from a 73-75 Suzuki TM. While steering stoppers keep the tank dent free and white fork protectors finish things off. 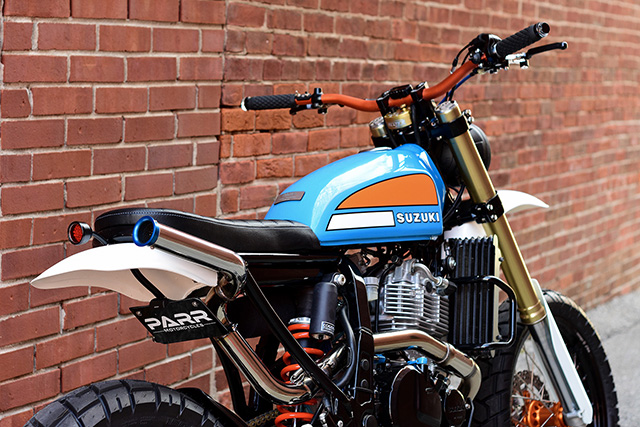 To tackle the urban environment the stock suspension would never do and Spencer’s ensured the DR now has razor-sharp handling. The front end from an ’07 Suzuki RMZ450 has been adapted to fit with the internals replaced by Racetech items to suit their new task. The rear suspension is a Cogent rebuilt shock with the spring matching the front, coming from Racetech. To keep things tame when really getting after it, a Scott’s steering damper is fitted and works with a bar that has been welded to the frame to make the connection. 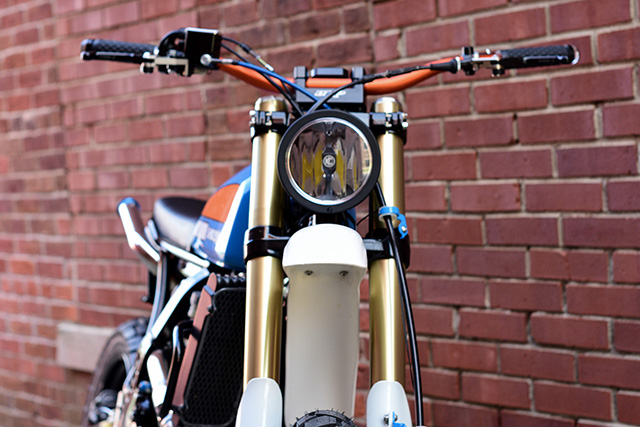 With such low miles on the engine, there was no need for Spencer to open it up, but that didn’t mean he was going to leave it stock. Fuelling the 644cc single is now handled by a Keihin FCR39 that has been totally rebuilt to suit and transforms the power delivery with instant throttle response. On the hot side an FMF polished header pipe is fitted up with the rest of the system built in house, the internally baffled system giving the straight through look. “I wanted a high exit exhaust to flow with the height and look of the rear taillight,” Spencer explains. 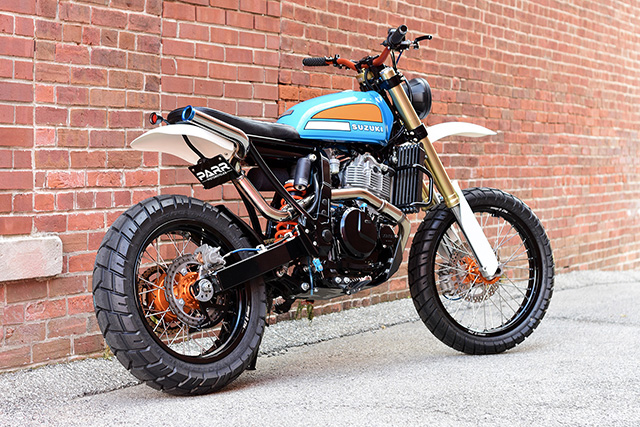 That taillight comes from Purpose Built Moto, with a KC LED front headlight providing the perfect mix of old and new. There are more clever electronics on the bars with LED turn signals and a Motogadget motoscope mini mounted between the BRP risers. With an m-lock and tiny anti-gravity battery completing the ultra neat wiring install. 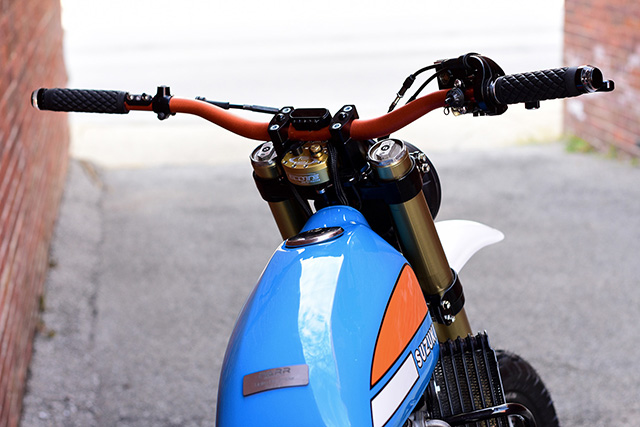 To finish the build, Spencer grabbed a set of Warp 9 Racing wheels, 19in front and 17in rear, wrapped in Shinko 705 tires with the orange hubs the perfect fit for the theme, “This build also means so much to me because I was building it when my baby girl was born. So, when this one leaves the garage, it will be hard to see it go,” says the Parr Motorcycles man. But we have no doubt his home studio album has hit number three well on the way. 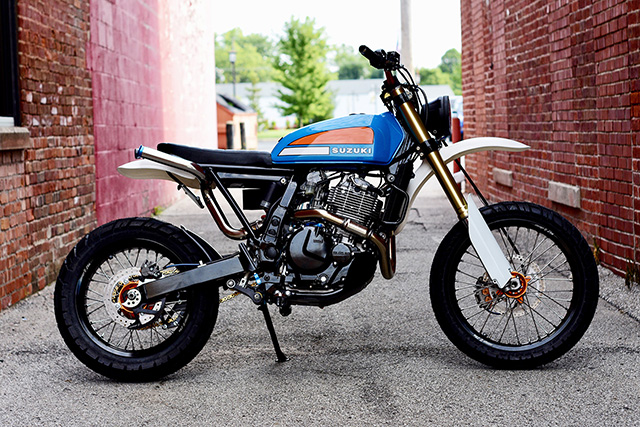 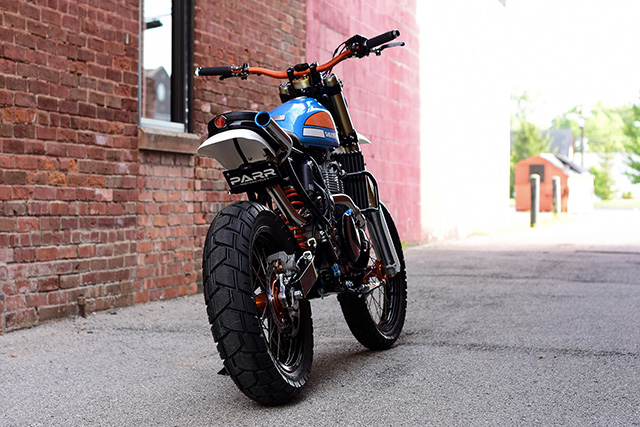 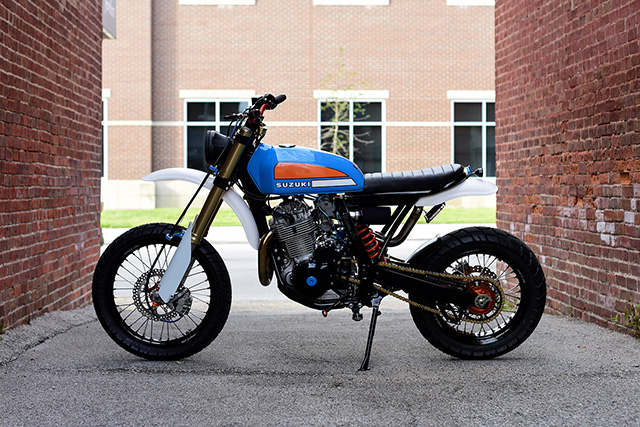