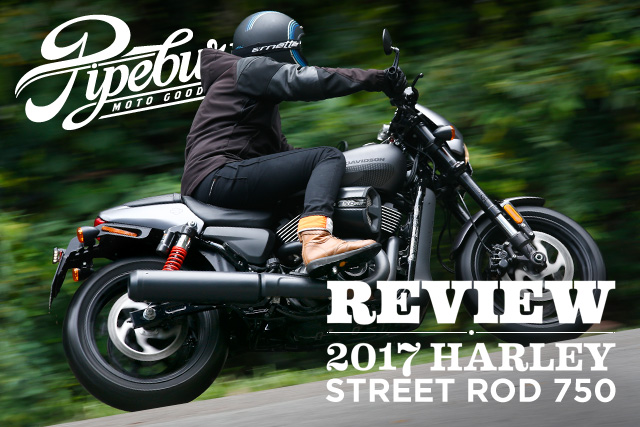 Written by Geoff Baldwin from Return of the Cafe Racers.

Back in 2013, Harley-Davidson announced the addition of two all-new models to their range, the Street 500 and 750. The development of these motorcycles signified the end of a 13-year-long new model drought for the Milwaukee giant and added a new category to their offering, namely, small capacity motorcycles. So the development of the Street came with two major benefits. Firstly, Harley finally had a motorcycle in their range for new riders and secondly, it was a machine more suited to the emerging markets. Then came another shock announcement. Harley revealed that the versions of the Street being delivered to countries outside of the USA and Canada would be produced entirely out of a new manufacturing plant in Haryana, India. The news was met with mixed emotions. Unfortunately, after their initial release motorcycle journalists and customers alike expressed disappointment with certain aspects of the Street’s performance, fit and finish. Harley responded quickly updating the Street with improvements that addressed the issues. It’s now been 3 years since their release and to say the Street was a success for Harley-Davidson would be an understatement. Harley has sold 35,000 units of the Street worldwide, outselling their own entry-level cruisers and giving competitors in the same category something to be nervous about. Now for 2017 Harley-Davidson has added a new offering to the Street platform, the 750cc ‘Street Rod.’ For the Australasian release of the Street Rod, I jumped on a plane to Singapore with a handful of other Aussie motorcycle journalists. Pre-flight chit-chat revealed I wasn’t the only one who was a little apprehensive about what we would be experiencing with the Street Rod, but we all welcomed the opportunity to have a go on one. After the 7½ hour flight, we touched down in the Lion City, where ambient temperature sat at 32°C and humidity felt like 150%. When we made it to the hotel any concerns I had regarding fit and finish were dispelled as I looked over the Street Rod on display in the lobby. I found clean welds, wiring neatly stowed, a well-aligned tank and very little free play in the controls. Things were off to a good start.

As is customary, we all met at the bar after check-in before heading out for a group dinner. Spirits were high (as in measures not moods) and little was discussed about the motorcycle we were all there to ride. The next morning we awoke to find the kind of weather you’d expect from an equatorial wet season. Rain drops were fat and there was a hell of a lot of them. So many in fact that the stairs outside our hotel had turned into a turbulent waterfall and drains were spewing out water rather than sucking it in. During breakfast, Harley employees sheepishly assured us the weather would improve while we all discussed whose riding gear was the least appropriate. Thankfully before we set off, we headed to a presentation by a few of the Harley staff who were involved in the development of the Street Rod. As the presentation began it quickly became clear how markedly different the Street Rod is to its siblings. In fact, this new model is more akin to competitor motorcycles like Ducati’s Scrambler or Triumph’s Street Twin. According to our hosts, the Street Rod concept had been in development since the unveiling of the first Street in 2013. It was originally coined the RDX800 and was built as a concept bike. Then, once the Street was released, the H-D development team focused their efforts on evolving their concept into a production model. Inspiration for the Street Rod came from American Drag Racing and muscle cars of the ‘70s. You’ll also note a dash of flat track racer, hence the XR red shocks, and a small front screen which is a nod to the V-Rod with whom it shares its name. The decision to go with this look wasn’t left entirely up to Harley’s design team. The H-D marketing department interviewed 3000 Harley riders to make sure the bike was appealing to their existing fan base. Looking at the finished bike, it’s easy to see that the Street Rod is a much more compact package than the original Street.

[superquote]“Inspiration for the Street Rod came from American Drag Racing and muscle cars of the ‘70s. You’ll also note a dash of flat track racer.”[/superquote]

A steeper rake pulls the wheel closer to the frame and a shorter tail gives the bike its “bulldog stance”. These aren’t purely styling tweaks though. Wide handlebars and that reduced rake produce a more responsive steering package for aggressive urban riding, which is where Harley sees most of their customers using this bike. Higher ground clearance and an all new suspension system further enhance the handling and mid controls position the rider high in the seat and slightly forward.

Power has also been modified using a tuned version of the Revolution X v-twin. A higher lift cam, higher rev limit, 12:1 compression, a revised exhaust and a larger intake work together to create the Street Rod’s “High Output” engine. This new configuration of the 750cc powerplant is good for just over 68bhp, almost a 20% jump on the standard Street 750. Harley also significantly improved braking by fitting a set of twin discs up front. The presentation ended and we were all relieved to find that the torrential rain had subsided to a light shower. We geared up, picked out our favourite colour Street Rod (I went for the ‘Charcoal Denim’ grey) and set off. The first thing that stood out to me about the bike was how wide the handlebars were. At first, they felt a little goofy and the additional length added by the bar end mirrors looked inappropriate for lane splitting.

At a touch under 6 foot, I’m not the tallest guy around, but the footpegs positioned my knees high alongside the tank and keeping my foot over the rear brake lever was a little uncomfortable, although this could be corrected with a quick adjustment. The exhaust note was overpowered by ticks and whirrs of the engine, but sitting behind the other bikes I could hear a decent burble and later in the day I noted a few pops when coming off the gas at high revs… which I rather liked.

Power delivery was smooth and decent for the engine size, but I didn’t feel the extra RPM tweaks did anything for the bikes performance. Most of the power was lower down where you’d want it for urban riding and this was welcomed later in the day during our interactions with Singaporean city traffic. The new suspension system was also a welcome improvement. The non-adjustable upside down front end was at times a little harsh but very capable and the high-mounted foot controls meant that peg scrapping was near impossible. The seat was also comfortable, so much so that I never really thought about it during our day of riding.

[superquote]“Most of the power was lower down where you’d want it for urban riding and this was welcomed later in the day during our interactions with Singaporean city traffic.”[/superquote] One thing about the Harley that became apparent when we entered slower traffic was how much heat the engine was giving off. The tighter proportions of the bike position the rear cylinder right beneath your precious parts and when the thermo fan kicked it exacerbated the situation. Admittedly it was a hot and sticky Singapore day so I’d like to give the bike another shot some time to see if this is, in fact, an attribute of this engine. All up I had a great time riding and reviewing the Street Rod. As Harley said this is a machine designed for urban riding, where I feel most at home. When the traffic became congested we weaved through it effortlessly. The hopped up Revolution X engine had more than enough power when I asked for it and the riding position was also perfectly suited to the bike’s intended purpose. With a price point that undercuts many of the Street Rod’s direct competitors, it’s sure to pull a few sales away from the other brands. As always, Harley will be releasing a comprehensive range of aftermarket add-ons for the Street Rod which could also be a deciding factor for many customers who like to make their ride unique.

[Thanks Return of the Cafe Racers. Lid by DMD. Jacket & gloves by Icon. Jeans by Saint. Boots by RSD]

The fine print: In an effort to keep things as legit as possible, we feel it’s best to mention that Harley-Davidson paid for Geoff’s trip to Singapore to see their new bike and also shouted him food, drink and lodgings. Rest assured that if the bike wasn’t up to scratch, we’d have no problems saying it. We will always endeavour to give you the best reviews possible without fear or favour; bike companies bearing gifts included.