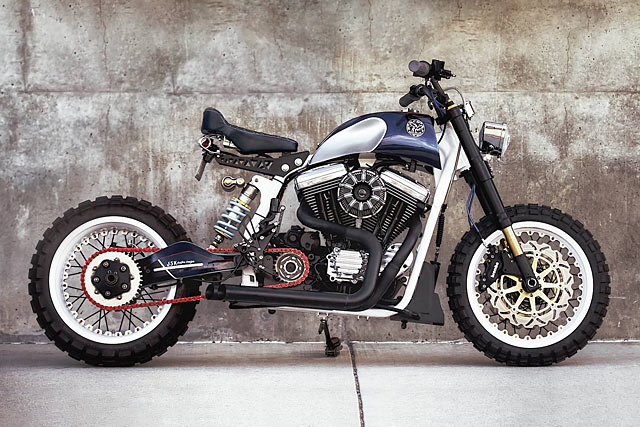 All or nothing. It’s a phrase you’d probably take to mean ‘no middle ground’. But it seems more and more builders are using it as a yard stick to define new genres for custom bikes. All of the popular styles rolled into one, or maybe none of them at all. What would a cafe scrambler tracker look like? Or an enduro street fighter? Conversely, how would a bike built purely to suit personal needs rather than a pre-existing category or style look? It seems that the cafe racer’s rule might just be coming to an end, and builders like California’s Sam Kao and his ‘Cobalt Storm’ Harley look to be on the crest of something very new. JSK Moto Co. was started by Sam in 2010 in La Puente, California. “Ever since I was a kid, I was known for my love of motorcycles. When I see one, I instantly start redesigning it in my head. I always have.” And for Cobalt Storm, the main (re)design elements are all drawn from triangles – whether it be the headlamp, the seat bracket, or the seat itself. “The Cobalt Storm is a design study on how to make the Harley Davidson Sportster more minimal,” says Sam. “It needed to be timeless as possible without adhering too closely to current trends. We wanted something you’d choose to ride more and further everyday; something suitable for some light off-roading, just because you can.”

By adding tracker influences for an upright riding position and knobby tires to achieve a few basic dirt capabilities, they’ve achieved something of a cafe racer aesthetic without the discomfort of a slouched riding position. The fuel tank may not look too TARDIS-like from the outside, but there’s lots happening on the inside. Now with two internal sections, the right half contains the fuel and the left half contains the electronics. Sam also used a Motogadget M-Unit and M-button to reduce the wires, relays, fuses. Three cheers for German efficiency. Sam was intent on balancing the bike’s HD soul with their modern performance upgrades. “A JSK bike must ride better than stock. Then and only then can we talk about how it looks.” In the Storm’s case, there’s CNC’d triple clamps for improved handling, a custom Gears Racing rear shock, a transplanted single-sided swingarm from a Ducati 916 (!) and USD Showa front forks to complete the Harley’s rather radical suspension modifications. Sam says that the real challenge of the build was redoing the wiring to fit the electronics into the tank. “Not only did we have to redo the cables, but we also had to figure out to effectively source and manage all the electronics devices inside.” It’s a brave shop that plans a complete rethink of a bike’s electrics and it’s electronics, too.

“My favourite aspect of the tracker is that I managed to reduce a whole heap of parts to make it lighter and more compact. But at the same time, it’s also a strong bike as we  upgraded to tapered bearings, lighter stronger triple clamps and inverted forks.” With that last thought from Sam ticking quite a few boxes on our mental ‘how to make a better Harley’ list, we’re keen to see what he does next. Very keen.