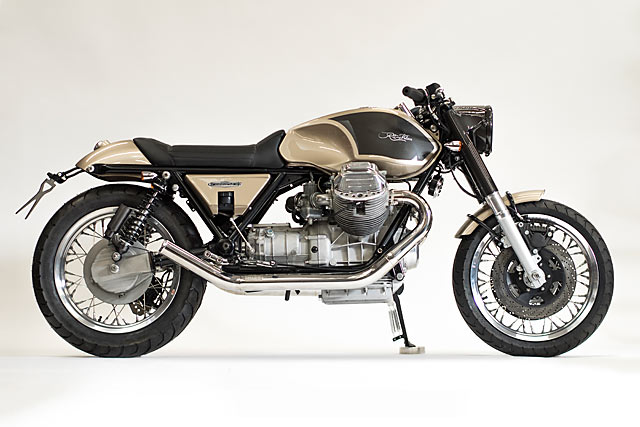 There are roughly 6500 unique languages spoken around the globe today. More than a billion people speak Mandarin, while many others languages have just a thousand native speakers. But wherever you go in the world, the language of Moto Guzzi fans is universal. While Ducati might be the king of Italian bike makers these days, Guzzi is arguably more important to the nation’s two wheeled history. Just ask any Guzzi fan and whatever the language they speak, their hand gestures will leave you in no doubt. The V configured engine, the unique engineering and the mechanical beauty of indestructibility sings a sweet song to many an admirer. But for all those who love Guzzi’s, very few can build a custom from a Lake Como creation like Filippo Barbacane of Officine Rossopuro in Abruzzo. This, his latest masterpiece, is known simply as the Ritmo Veloce 850. While everything sounds better in Italian, Ritmo Veloce essentially means fast pace and generally is associated with music. So at first glance it may seem strange that a bike destined to be a racing steed started life as a bulky ’70s Moto Guzzi California T3. More a highway machine than twisty track terror, Filippo however saw in it two ingredients that make for speed.

The genius Tonti frame that was far superior to almost anything of the time, stiff in construction and generous in feedback. Matched up beautifully to 850cc of V-Twin torque that’ll pull like a freight train in any gear. For Filippo the name became the design philosophy “The name Ritmo Veloce commemorates its nature, a bike built to go fast, with a precise Tonti frame, with more modern and better suspension and tyres.” But with a wet weight of 263kg there would be nothing fast paced about this ride until the old girl was put on a serious diet. You can bet the enormous windshield and panniers were the first to go as both weigh a ton and look horrific. But the rest of the weight would have to be shed carefully; there would be no hacking up of the Tonti frame as many do.

From the start Filippo was determined to create a truly custom motorcycle, radically repurposed but without preventing him from returning it to factory spec should he ever wish to do so. Given the historical importance of the T3 to the Guzzi lineage it makes perfect sense, while also causing some headaches along the way. However remain stock, the tank does not. As a self-confessed lover of Guzzi’s of this era if one thing let them down for me it was the fuel tank design. But Filippo has taken a design fail and turned it into one of the most impressive pieces of metal reworking you are ever likely to see. From the incredible flowing lines of the knee dents, to the increased aggressive profile of the tanks shoulders. Every change he has made is nothing short of perfect. Even constructing a recess for the gauge takes nothing away from the tanks design while further cleaning up the front end. While moving rearward the decision not to cut the frame might have provided some restrictions it did nothing to reduce the symmetry of the tail section. Simple and seamless, the low height hump allows the centre of the bike to bear the bulk of the mass. The seat itself takes many of its design cues from the original model right down to the way it’s stitched, but is anything but standard in fit and finish. The rear hump holds an integrated tail light and when matched with the smooth front headlight housing keeps the lines ultra-clean.

If you look at the spec sheet of the California T3 and conclude the engine is a heavy lump that makes not a lot of power you’ve missed the point. A Guzzi has to be ridden to be understood, it’s all about torque and not interested in racing show ponies of the HP kind. Even in stock trim packing all that weight the stock engine would pull it to an effortless 200km/h. But more impressively with 100,000km on the clock when most engines have called it a day the Guzzi is just bedding in. For Filippo this is one of the key attractions of the brand, “I do not like motorcycles that are only beautiful to look at but then cannot be used to travel many kilometres.”

So to ensure the fast paced 850 could keep going for years to come without a hiccup or a hitch he pulled the motor down and gave it a thorough rebuild. With the engine out the bulletproof drive train, consisting of the transmission and shaft drive assembly was also refreshed. Before the whole lot was cleaned, buffed and polished to show off its broad-shouldered magnificence. Cylinder head guards protect against a fall and the carbs have been re-jetted for the major change to come. In conjunction with Mass Moto a stunning exhaust system was built specifically for the bike, with internal baffles ensuring the pipes are left to stand out on their own and soak in the generous applause they deserve.

Making the bike handle and stop was a key part to the design criteria, as fast pace is all well and good until you get to a corner and can’t slow down. But it’s here that Filippo received some assistance from the original designers as the later T3 model indicates the fitment of 3 disc brakes, two front and one rear. But a good thing can always be improved, lighter discs and alloy support for the rear caliper further improve stopping power. While the lacklustre factory rear shocks that always let down the terrific Tonti frame have been swapped out for fully adjustable Marzocchi units. With the hard graft taken care of the final aspects of beautifying the T3 took place with a constant eye on staying true to the theme. The colour choice is not only a period selection, but perfectly shows off the skilful metal work it coats. The handlebars were custom-made to suit the lines of the bike, low and close to the body, there is no line that appears out-of-place. Finally the wheels were re-laced to 17in rims that allow for the fitment of modern tubeless tyres and the 160 section on the rear makes a statement all of its own. In creating a sharp handling hauler Officine Rossopuro have more than lived up to the Ritmo Veloce 850 name, but the fact it looks fantastico just standing still shows when it comes to Guzzi’s, Filippo has all bases well and truly covered. Bravo!