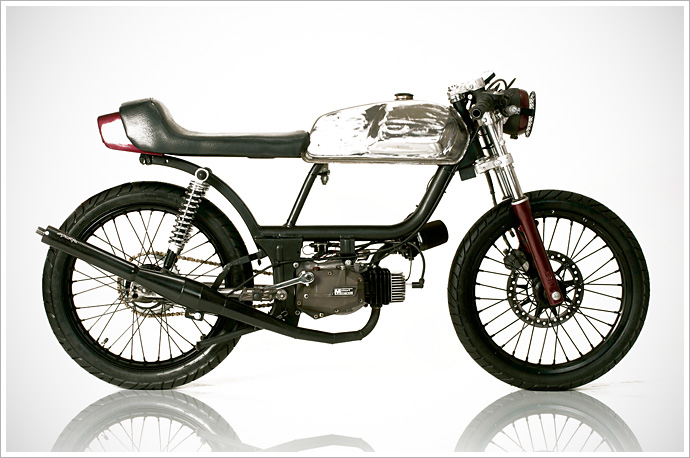 I was shooting the poop the other day with a few bike-minded compadres, and the subject of mopeds came up. Now as often happens, one of the peanut gallery came out with the usual, “they’re not real motorbikes” schtick. Which I have always thought was a rather irrational and petty view to hold. See, if you look back over the history of motorbikes, you’d quickly find that not only do mopeds and motorbikes share a common ancestory, but for the first phase of their existence, motorbikes were essentially mopeds. We all love board trackers, but somehow we seem to forget that many of them actually had pedals, twin chains, and bicycle frames – just like mopeds. Not real bikes, you say? Tell it to Austin Tremellen, the man behind Rougue Creations and maker of the wonderful ”Blood Lust”. Here’s Rogue’s main man – Austin Tremellen. “Thralled by these forgotten machines, I suppose I never had a chance to avoid the unique relationship I share with these 50cc time capsules. I mean, let’s be honest here, through its entire life cycle the moped has no dignifying point and has been used merely as a means to an end.” So I guessing it’s not going to suffer too much from crosswinds, then?

”Born into an era recovering from World War, the moped went into production for cheap transportation, when creating more desirable forms of transportation was just too taxing on valuable resources. Again the moped found its way to the USA to aid in the 1970’s oil crisis helping many people with reliable transportation while driving cars was just too expensive. Shortly after the oil crisis, most mopeds retired to basements, barns, and the deepest corners of garages, as they served their purpose to those who originally needed them.” ”What could be more gratifying than taking someone else’s forgotten about junk, and turning it into a composed form of functional art? This is what truly calls to me when restoring and building a moped, I am not just giving a new life and propose to these little machines, but also giving them something they never had, respect.” ”While building Blood Lust, my goal was never to be the fastest off the line, and not break top speeds, but create a ride that just felt as good as it looked. To me this means, feeling safe and solid at 60mph, it means keeping up in traffic from stop light to stop light, as well as feeling confident when throwing your weight into a turn. I think Blood Lust illustrates why building mopeds became a passion, commitment, and obsession to me.”