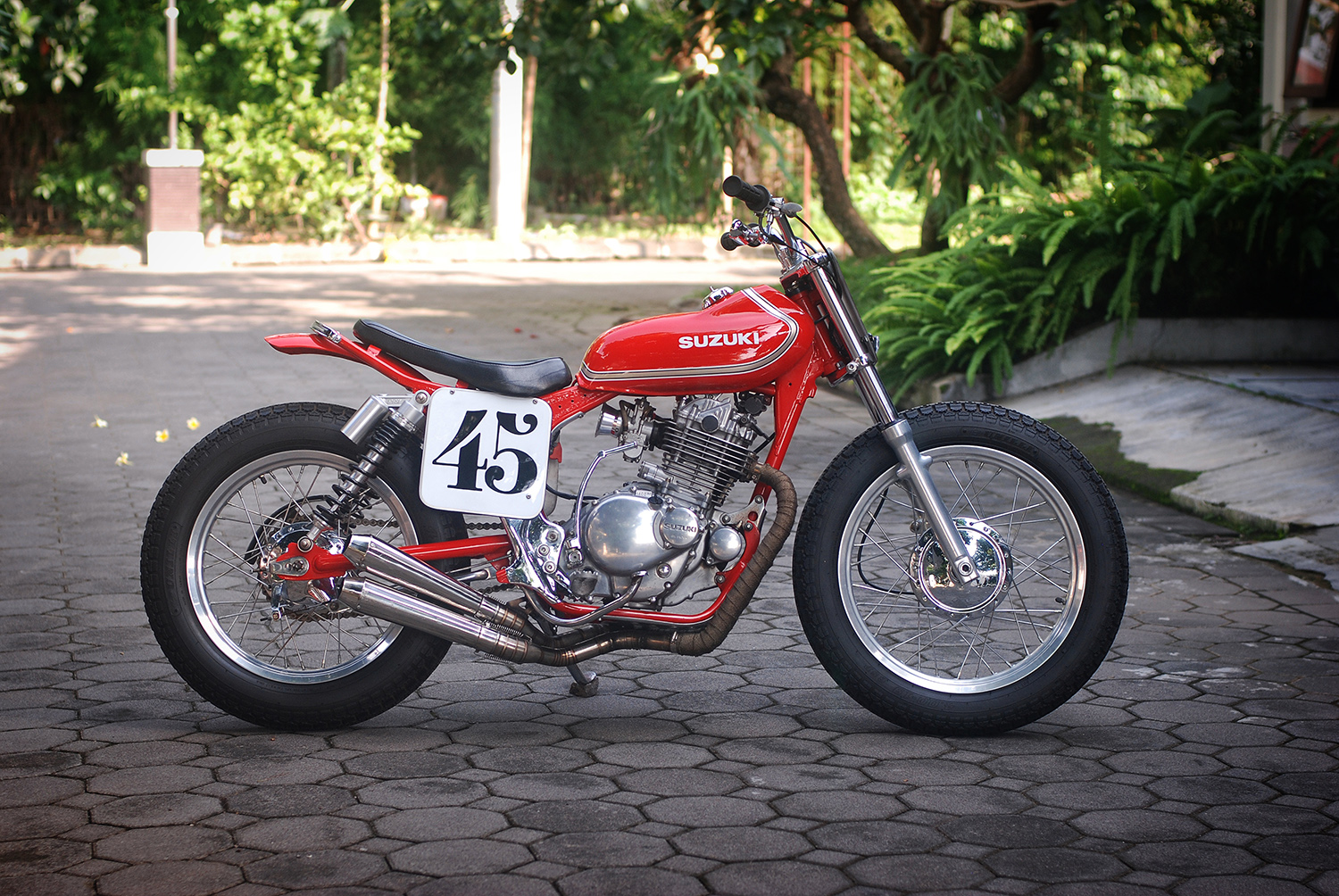 It remains one of the most beautiful racing motorcycles of all time, and it all started with a $200 wreck. But when you’re an innovator like the legend of Motorsport Ron Wood, you find a way to do things differently from the rest of the pack, win and look good doing it too. So, it makes sense that somebody deeply inspired by that famous Flat Track machine would by nature be an innovator themselves and know the people to work with to make their dream a reality. Enter Indonesian with a vision Haris Wicaksono and his friends Racing Pro Teknik, who turned this humble Suzuki 250 into a stunning emulation of Norton royalty.

Ron Wood was a successful Californian businessman, with a large lighting fixtures company, who also ran his flat track race team out of the same warehouse. And while his Wood-Rotax bikes were his most successful, his Norton ‘lightweight’ Dell’Orto that won the Ascot AMA Grand National in 1978 remains his most stunning achievement; both for the feat achieved and the good looks of the bike itself. Fast forward to 2021 and in Indonesia, Haris was doing a Google search looking for some inspiration.

“I love custom motorcycles and I wanted to build a vintage and sporty one but not a cafe racer because it breaks my back when riding it for long journeys.” Having owned his 2001 Suzuki GN250 (known as a Thunder in Indonesia) for the past seven years, he was ready for it to receive a total transformation. So, stumbling across an image of the Wood Norton was all he needed, and it was off to see Seful Amar at Racing Pro Teknik to see if he could emulate the ’70s beast on the smaller Japanese machine.

Stripped down and torn apart the frame was cleaned up, smoothed out and modified to suit the task at hand. To get the bike rolling the original front end was refurbished, polished to within an inch of its life, and then lowered internally. To get the look they were after, the crew chose a front drum brake hub from a CB200 and laced it up to a 19in front rim. At the rear, a new set of shocks was found online that would match the ride height drop, the rear hub was polished and like the front, the 18in rim was wrapped up in Unilli rubber.

To get the look of Wood’s Norton, the stock gas tank would never do, and a copy of the American creation would set you back more than the little Suzuki cost. So, with a few sheets of aluminium in his hand, Seful got to creating. And formed the stunning custom tank, that emulates the lines of its famous big brother, yet in the perfect proportions to match the GN. Even the rear section of the frame takes on the look of the bigger bike and a rear fender was hung in the exact same manner. The number boards read 45, one up from the original, and even the leather seat is mounted in the backward Wood style!

But it’s that bright red paintwork that continues to draw your eye, flawlessly laid down across the frame and tins, with the graphics to match. Even the little 22hp single-cylinder engine has been given the full treatment, polished to perfection and the new carb wears a stunning machined velocity stack. It’s that exhaust, however, that makes the big statement with the twin headers snaking tightly rearward and finishing in a set of twin racing mufflers. We are simply bowled over at just how good Haris’s vision and the custom work of Racing Pro Teknik is, having shown Ron Wood like innovation in creating this ripping little flat tracker for the road!