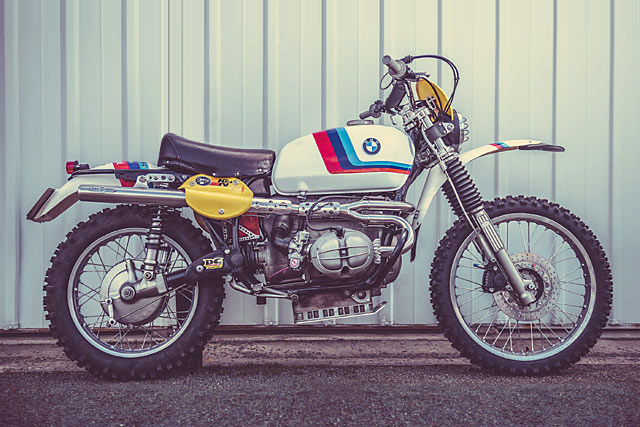 The International Six Days Trial is a true giant amongst motorcycle races. Celebrating its 100 year anniversary in 2013, it claims the prize for the world’s oldest off-road motorcycle race. Originally held in Carlisle in the north of England, in the Seventies it held its first race outside Europe. BMW put their brand where their mouth was and entered a four man factory team, including the renown Herbert Schek, in the race. To celebrate the event, France’s Lucky Cat Garage have come up with an amazing R80/7 enduro that pays homage to BMW’s bold, muddy efforts during those six long days in 1973. Lucky Cat Garage is based in the small northern French town of Chartres, which lies between Paris and Le Mans. Founded in 2012 by Seb and Laurence, they have a strong track record for creating bikes that draw on motorcycling’s history while also pushing the modern custom bike scene forward. We think it’s fair to say that their 2013 ‘Sprintbeemer’ dustbin racer shook the wheels off the bike scene in Europe and spawned an entirely new genre of modern racers. As for this build, Seb says that the inspiration came straight from BMW’s 1973 ISDT efforts. “I think that was the first time the brand used the iconic ‘Motorsport’ colours on a race bike. It’s scheme I’ve always dug. When I decided that I wanted to build a vintage sport enduro, the obvious choice was a GS. But the more interesting route was to explore the story before 1980, and the GS models. Besides, it was way more fun to convert a street bike into a proper off-road racer.” The bike’s base is mostly a ’78 R80/7 that was found on a popular French used bike website. Seb and Laurence ditched most of the bike’s bits, sparing only the engine, gearbox and the frame. “It wasn’t in very good condition,” says Seb. “It had a leaky tank and it was quite rusty, but it was more than OK to base a build on.”

Unusually for a custom bike, it was by and large developed on the race track. In this fashion, what it needed and didn’t need quickly became apparent. “I used the original rubber footpegs in the beginning, but I quickly figured out that they were useless in muddy conditions.” He found the same with the bike’s original 19” front wheel. Upgrading to a knobby 21″ tyre much improved the bike’s off-road abilities. But the serious custom work began with the engine mods. A brand new electronic ignition system that works without a battery was installed first. Then came the Mikuni VM carbs for a better throttle response and a K&N filter to protect the engine’s innards from the dust. A HPN sump with an integrated (and very strong) skid plate was installed to avoid any oil leaks from over aggressive rocks. The gearbox is a 5-speed unit without a kickstart, just as Bavaria intended. It’s been combined with a short ratio rear end, as top speed was clearly not the priority. “Another small bolt-on mod was the engine valve covers from Siebenrock,” Seb notes. “The left one is modified to allow you to add oil in a more convenient way than usual. It’s quite useful when everything is caked in dust or mud.”

The chassis has been upgraded with bespoke, longer rear shocks made by French company Shock2Win. Up front, there’s a modified R80 GS front fork with a billet aluminium upper triple for extra strength and UCC aluminium covers for a slick finish. The front brake is a Brembo 2 pot caliper combined with a full floating disc. And you won’t be surprised to learn that both wheels are shod with Metzeler ‘SixDays Extreme’ tires. “The exhaust is one of the bike’s most visible custom parts. It was made out of stainless steel by the Hattech Exhaust company in Germany. The 2-into-1 design gives the bike much more ground clearance and harks back to the ISDT factory bikes.” The enduro’s bodywork is reduced to only what’s absolutely necessary: a tank from an /6 combined with a /5 solo seat, Maico fenders and some rather funky yellow plastic number plates. The front headlight’s a Yamaha unit with some Husqvarna brackets. Under the seat, an original storage compartment is used to carry tools and spare parts. There’s also a first aid kit just in case your shirtless Steve McQueen riding impression goes pear-shaped.

‘There’s many details that have been added along the way,” says Seb. “An extra light on the left engine guard was installed to see at night in the woods. There’s also some rubber extensions on the front fender, and the ‘bar controls are genuine Magura forged aluminium levers with vinyl covers and a Domino throttle housing.” And to set their hard work off to perfection, the boys called in a close friend at Venom Design to lay down the colours. Surprisingly, it was only the tank that was painted; the number plates and mudguards are plastic and were enhanced by stickers. The upshot’s that they can get scratched without too many tears – just as all decent off-road parts are intended to be. And suiting the nature of the build, there were no real fabrication or technical challenges with the project. Instead, the toughest parts were finding the required retro components in good enough nick to be reliable and look half decent.

“What do I like the best?” Seb asks. “It’s when BMW enthusiasts are looking at the bike and they think it’s a GS. For me, it means that the bike looks like an original factory build; it’s probably the biggest complement I could get.” Correction, Seb. The biggest complement would be an offer to buy the thing. And if you feeling a little too wealthy for your own good, the enduro just happens to be for sale. Best make an offer while the thing’s still clean.