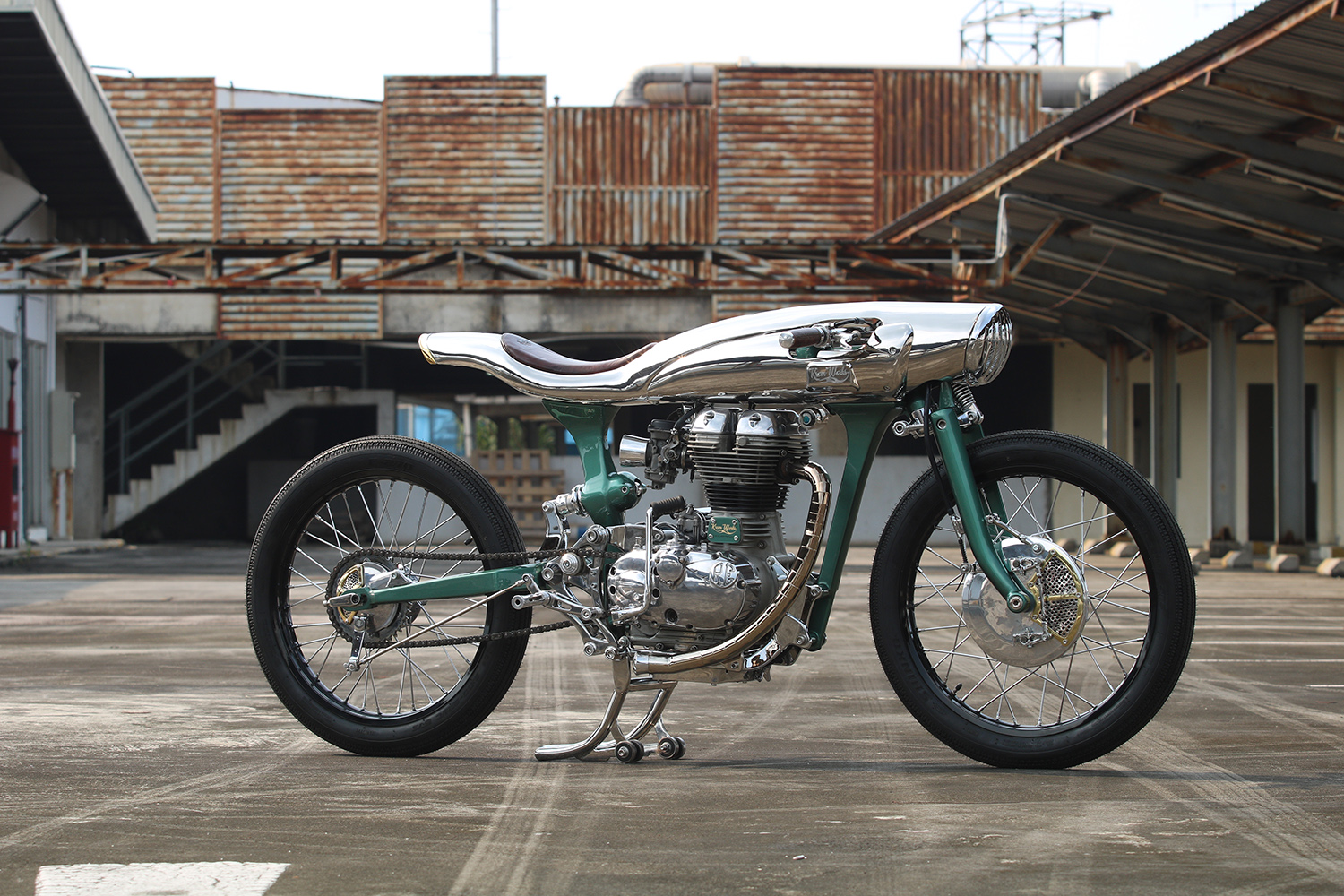 The term genius is one that gets thrown around far too often and should be reserved for those who truly deserve the title. One such man is Indonesia’s Andika Pratama, who simply does incredible things with motorcycles that nobody else is doing and often haven’t even considered, let alone tried. So when a call came in from the other side of the globe, Andi saw it not only as a chance to build another amazing creation but an honour that his bike would find its way onto the roads of the UK. Using just the engine of a 2017 Royal Enfield Bullet 500, he hid himself away at Kromworks HQ and emerged with a crazy custom bike that’s ready to fly around the world, called Icarus.

Oh, and for those who think these are just show bikes, Andi can be seen riding them and riding them hard throughout the development process. He puts his own skin on the line to prove what he makes works, and works well! “In early 2020, I got an email from Keith Edney asking me if I could make a custom motorbike from the Royal Enfield Bullet 500cc to be delivered to the UK,” Andi tells us. With the final design drawn up and approved by Keith, it was immediately down to work with just seven months to complete the entire process.

“I personally see custom motorcycle must always be different and evolve from what have been previously made.” And nothing does that by creating the foundation of the motorcycle, not from tube or aluminium, but by crafting a full chassis from iron plates that are 8mm thick. This is where Andi’s incredible metalwork skills come to the fore, not only having the ability to work such material for this unique job, but also having the engineering background to make it function well and be safe at the same time. The single down tube design uses extra support at each intersection, custom engine mounts and a truly unique centre post to accept the rear shock.

The swingarm too is crafted from the same material, allowing for a slim profile that is still significantly stronger than the standard item. Which is true of the whole chassis, giving a rigidity you’d normally expect from a sportsbike, rather than a single-cylinder RE. “After that, the front suspension was made using a Girder fork. This process was rather complex because the suspension had to function well and its position should be a perfect fit. The polished pivot arms sit inside the legs and create a compact package, with the shock mounted tight to the headstock.

The rear suspension is another brilliant design, the process starting with the solid linkage from the swingarm placing the shock almost parallel to the ground. The custom, preload adjustable shock, then runs through the centre post with the top eye secured inside a custom surround. The unique combination front and rear ensures that the bike stays almost completely flat as weight is transferred to the front, providing excellent stability under brakes and on turn-in. Then to get it all rolling Andi had to come up with a set of hubs. But, rather than buy existing items and adapt them to fit, you know what was next.

Starting with two blocks of billet aluminium they were machined down to his exacting specifications, with the front designed to accept the outside and covers of a 28cm drum brake system. The rear is just as stunning, again a drum is handmade with rear vents secured with a brass plate and the sprocket appearing to almost form one single part, and yet is still removable for replacement or gearing change, impossible on an old style setup. A set of 21in rims was then chosen, laced with stainless spokes and then wrapped up in vintage rubber.

The bodywork is no less impressive and starts with what you cannot see, a frame matching and painted hidden fuel cell in the style of a rounded peanut tank. Over the top the monocoque like design is shaped from the impossibly hard to work with stainless steel, but having built chassis’s from the material Andi simply gets it done! “The front and rear lights were put behind the cover grilles that make the bike look like having no lamps.” The battery sits in front of the fuel tank, with removable stainless side covers allowing access, that also had to be perfectly designed and executed to allow the handlebars to poke through and still provide ample steering.

The engine itself slots into those custom and polished mounts, that also provide the attachment point for the custom rearsets, and looks right at home in the centre of the frame. Andi and his team spent plenty of time polishing the side and rocker covers to match, and wired the bike up hiding absolutely every last wire they could find a new home for. The engine itself is jazzed up with a single hand made stainless exhaust with a turned end, that matches the machined velocity stack on the intake. The contrasting colour, metal finishes and vintage leather just work perfectly together and we have a feeling Keith is going to be over the moon when this Kromworks masterpiece touches down in The UK.