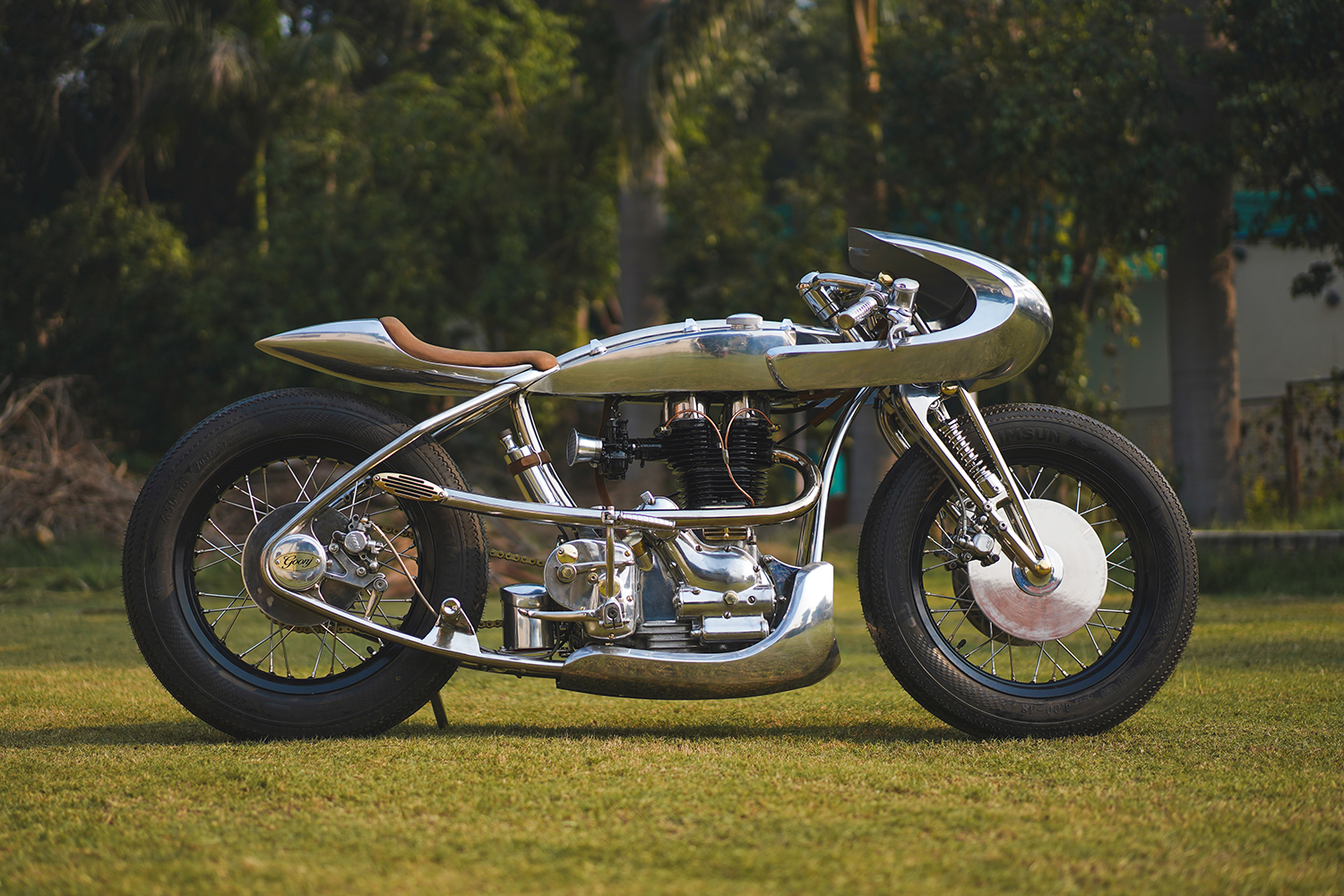 Racing at the TT, breaking world records, riding the wall of death and building his own land speed record bike amongst many other accomplishments, Guy Martin is motorcycle crazy! But it wasn’t until he went to India that he saw a whole other side to the world of motorbikes, the pride in ownership, the miracle fabrication with almost no tools and the sheer joy of his fellow travellers in this two-wheeled world. Defining that ethos is the crew from TNT Motorcycles, who for more than a decade have been building incredible customs from their shop in Delhi. They’ve literally built just about every kind of bike you can imagine, but an all polished metal machine for a beloved client has once again helped them find new levels of greatness, meet the Royal Enfield ‘Goonj’.

TNT Motorcycles are the sort of group that Mr Martin fell in love with when he travelled to the populous nation for the first time, a journey documented in the excellent TV series ‘Our Guy in India”. Guy might have been one of the biggest names in racing at the time, but he was falling out of love with the sport. And it was the motorcycle community of India that lit the passion for him once again. Just like himself, they love bikes, they work incredibly hard, enjoy a good brew and can tinker with the best of them. The owners of TNT, Nitin and Naveen, are those sorts of guys, they’re our kind of guys, nothing is beyond the imagination and they do everything with a smile.

So, when Nikhil, a biker who’d been down on his luck decided it was time for his bike to be transformed into “a work of art”, he knew exactly who to see. But it wasn’t to be just any bike, a number of years ago Nikhil had traversed the Himalayas on his beloved Royal Enfield Bullet, the old kind with a proper cast iron engine. But it was during this epic adventure that he suffered an accident and both man and machine were laid up for years. He was never going to sell the bike, but it wasn’t doing anything either. Then COVID hit and as it did for so many of us, it reminded Nikhil that life is short and he wanted his Bullet turned into something that would live on in his family.

The bike itself is a Bullet Electra 350 and having seen TNT turn Enfield’s into everything from full-blown, low-to-the-floor Baggers, classic Scramblers and everything in between, what Nikhil might receive back from the crew could have almost been anything. But with such a perfect client, this was a chance to build an all-metal bike and the first step for Nitin and Naveen was to select the exact metals they’d use. The desire was to use all stainless steel, but there were two issues, it’s hard to shape and it’s heavy too. To complicate things, the TNT guys explained to me that an English Wheel is not that common of a tool in India and everything is literally done by hand with hammers.

So with that determined, “we decided to build a combination of Old School Café Racer and Board Tracker, completely out of Stainless Steel (SS304) and Aluminum so that it does not corrode or attain any kind of rusting so that it stays in the family forever,” Naveen explains. This is a bike where the pictures really tell the tale, and those beautiful lines of the chassis are entirely made from stainless steel. The sweeping hardtail with its rounded off end plates helps to give the entirety of the bike that flowing feel from front to back.

Speaking of the front, the guys knew stock forks wouldn’t look good and the hard lines of a springer weren’t right either. The solution, build a complete one-off girder from end, all from stainless steel, using relatively basic tools; genius.

The twin exposed coil-over shocks mounted low to give a really unique appearance and it’s not every day that you see a vintage-styled girder with modern Nissin twin calipers hanging from the bottom. The discs themselves are covered up with beautiful alloy discs and more of the aluminium work includes the fuel tank hangers, hubs, sprocket cover,  engine point cover and rear axle covers.

The big aluminium pieces are of course the three large components that make up the bodywork and literally hundreds of hours of ‘tinkering’ went into making them absolutely perfect. From the racer-inspired front cowl, to the old school boardy-styled fuel tank and that exquisite tail, which almost floats out over the back of the bike, each piece is finished with the sort of love and care that comes from people who literally live for what they do. “The saddle has been upholstered in Tobacco Napa leather along with wiring and cable covers done by Trip Machine Company who are famous globally for their leather craftsmanship.”

Then there are the stainless steel pieces, each built as if it was its own piece of art, from the handlebars with internal cable mechanisms to the foot pegs, all of the levers and shifter, right through to the side stand. The engine gets a little of everything, with a machined alloy velocity stack and that stunning all-stainless single exhaust. And if you look closely at the tip you see one of the number of brass accents added to the build to break up the polished metal appearance.

You really just have to sit back and drink it all in. With the ever modest Nvaeen telling us “the build has been named “Goonj” after Nikhil’s spouse’s name which translates to ‘echo’. We just hope, we have justified the build to her name.” My friend, you definitely have