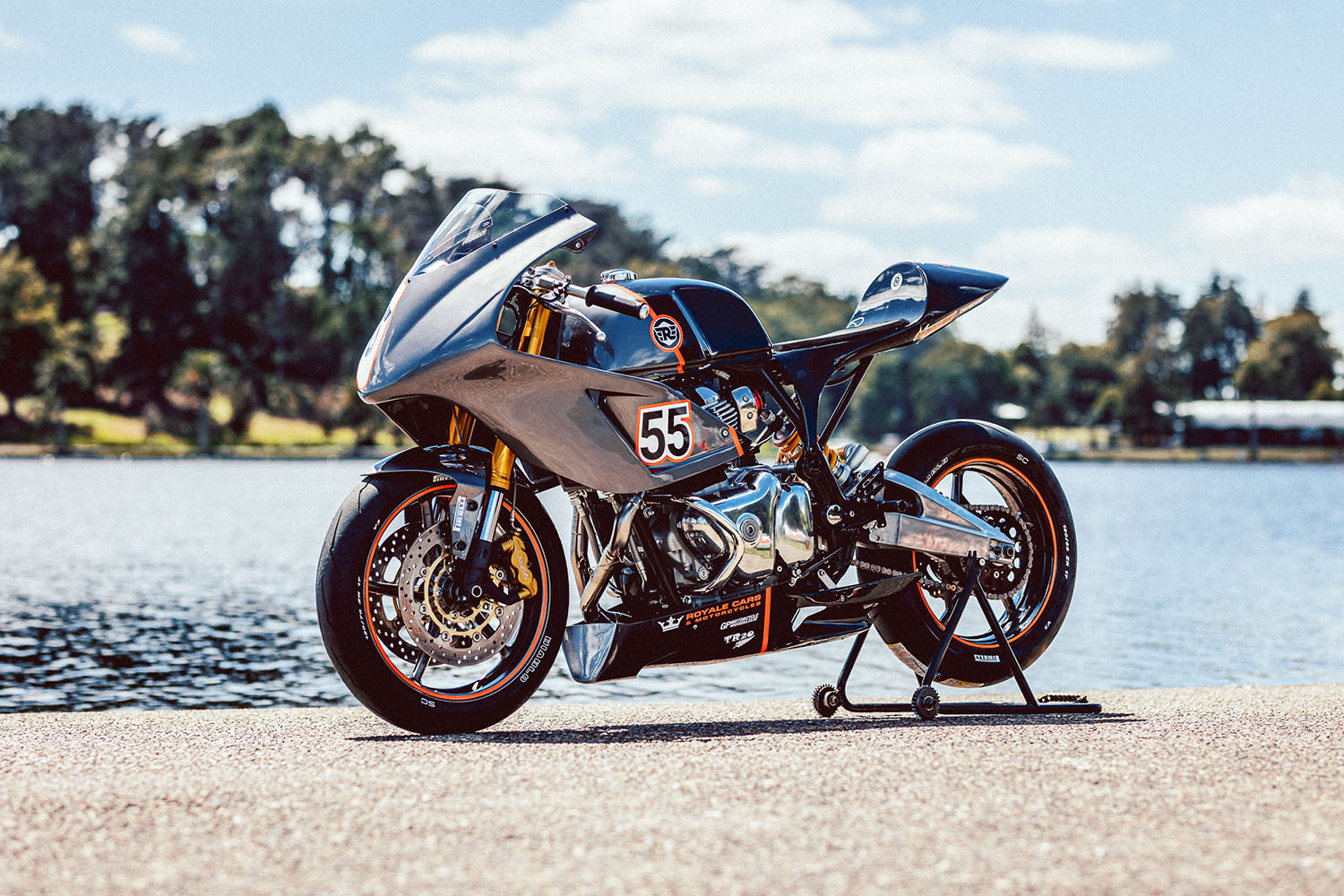 You have to hand it to Royal Enfield, since the very first announcement of their new twin-cylinder engine, they’ve been happy to have the Interceptor and Continental GT 650 models put to any test. They keep coming up trumps, and to show off the bike’s customisation potential they’ve just unveiled the machines from their second Busted Knuckles build-off. Involving five Royal Enfield dealers from Australia and New Zealand, we’ve picked out one that pushes the racing envelope all the way to the edge of the track. From Royale Motorcycles in Hamilton comes No.55 Production Racer, it’s modern tech meeting an old school throttle cable that’s absolutely pinned!

Royale is a big place, a huge car and motorcycle dealership, and proud of their roots they wanted to do something in the spirit of NZ legends, Munro and Britten, that meant a race bike! As Dylan from the shop explains, “It was all about doing something very different. We kind of went a little crazy. Mainly because we didn’t want to build another cafe racer, bobber, or tracker.” With ‘Twins’ racing booming around the world and RE already having a one-make ‘GT Cup’ production series for the bike in India, there was plenty of inspiration to be found around the world.

“It was still a big job to make it happen,” continues Dylan. “We sourced many parts from an army of other bikes and manufacturers to ensure that what we finished up with was a proper racer and not just a look-alike.” With the Enfield still using a traditional steel frame, there is none of the stress of dealing with a twin-spar aluminium unit when making changes. This meant not only was the customisation of the subframe much easier, but the big change of converting the bike to a single shock also came with fewer headaches.

To help complete the task and do so in a way that would significantly improve the handling of the bike, the factory swingarm has been swapped out for a Honda alloy unit; looks the part too all polished up. With an upper mount then fabricated, an Ohlins fully adjustable shock slots in and allows the bike to be properly dialled in. To give the front end all of the extra feel to match, a full USD fork conversion was performed using equipment from a Triumph Daytona, with adjustment just a click away on the fork tops.

The braking performance, kind of important, on the race bike gets a big improvement thanks to the Triumph’s twin rotors and Nissin calipers. The lightweight wheel from the British supersport also joins the party and the rear end utilises a wave pattern disc, Brembo caliper, and modern 17in rim. Those wheels are wrapped up in Pirelli Diablo SC rubber that is the perfect mix for road and track riding. “As with any proper race bike, it’s not only got rearsets but a full range of adjustability, too. This means that it can be tweaked for just about any track and any rider,” notes Dylan.

The bodywork, of course, had to be of the race variety and provide useful wind protection out on the circuit, but rather than copy the ‘GT Cup’ kit or adapt a full fairing design from another machine, the guys opted to come up with their own solution. In doing so, the half faired bike has all of the function covered while still showing off that absolutely unique RE engine. A modern front fairing gets the air moving smoothly around the bike with an opening for the oil-cooler. The belly pan is all business and provides fluid-catching protection should something go wrong and the seat is super slick.

The stock tank remains in place to allow for more of the unmistakable stock appearance to shine through. And then it’s all been attacked with the spray gun, for a stunning two-tone paint job that is broken up by the brilliant day glow orange graphics and neat logo package. The foam on the seat unit shows that this is a bike that means business and utilising RE crash protection is a very clever addition for a bike that could end up on its side when tipping the front end in at full speed.

The engine also gets some extra treatment too, with the drastically over-engineered factory unit fitted up with a bespoke exhaust system that was constructed in-house. To finish it out and add some bark, the end can is HP Corse and looks a million dollars. On the intake side, there is a set of red anodised velocity stacks to get the gas moving, and it’s more than enough to bring the 650cc to life.

The analogue nature of the Royal Enfield means this is a bike you can take to the track and not be fighting the electronics, it really is the best of both old and new, giving Royale Motorcycles a track day experience like no other.