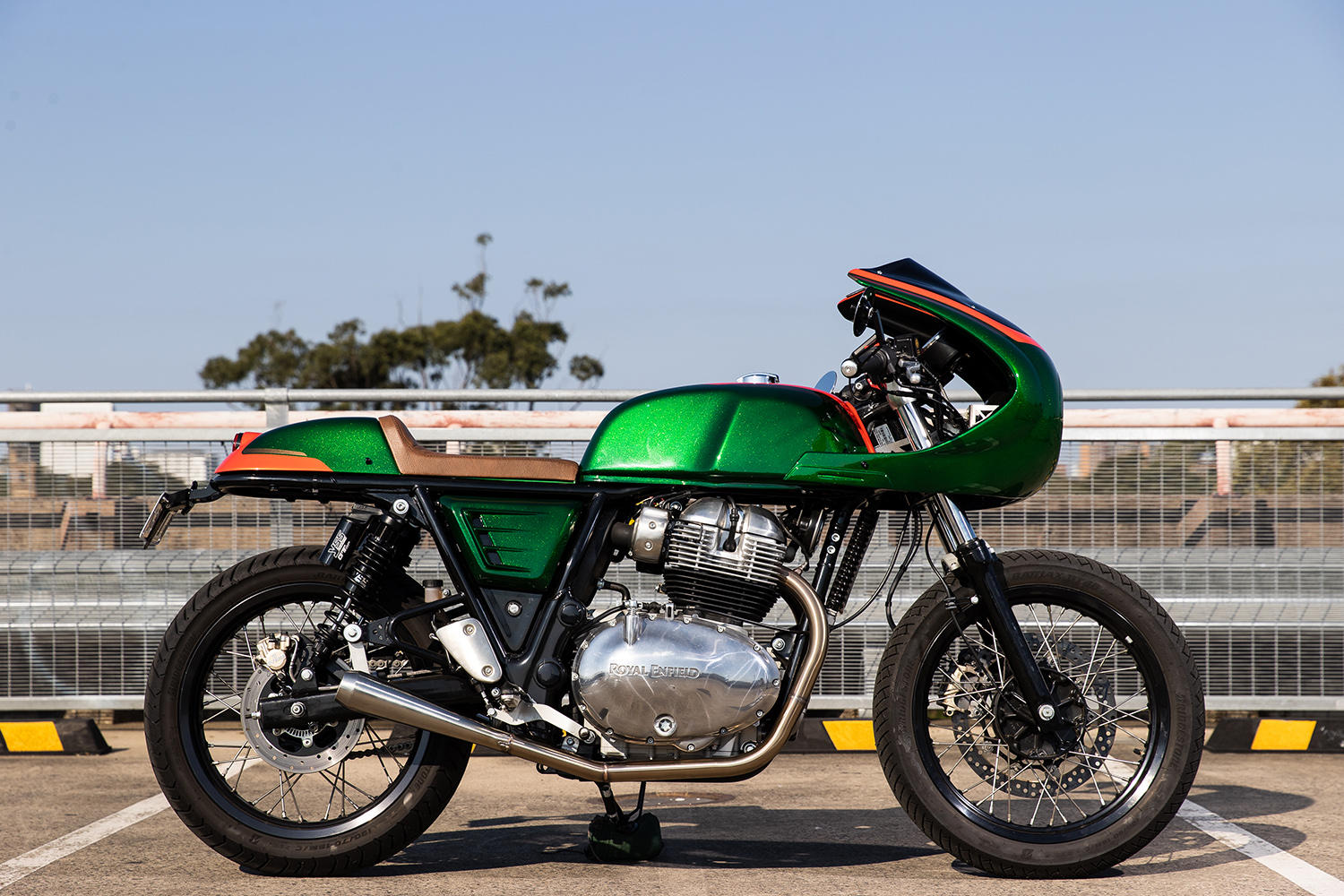 The man, the myth, the legend; he’s still got his full set of ears and an even fuller beard, so make way Mark ‘Chopper’ Read, it’s our very own and slightly more attractive Aussie knockabout, Mark ‘FKN’ Hawwa. The big man with the even bigger heart is the brains behind events like the famed Distinguished Gentleman’s Ride, which has raised millions of dollars from every corner of the globe for causes like prostate cancer research, men’s mental health, and suicide prevention. Along the way he’s become friends with the industry’s best talent in the custom scene, so it made perfect sense for Royal Enfield to partner up with him for a bolt-on build. Starting with a Continental GT 650 they’ve produced a stunning cafe racer that’s equally at home tearing up the track.

Back in 2018, Mark was one of a select few who was invited to Santa Cruz, Califonia for the media launch of Royal Enfield’s new twin-cylinder range. “Riding through the Redwoods is still one of my best riding experiences. The 650s performance and charm put it up there with my favourites of the cafe racer category,” he told us. He wasn’t the only one singing the praises of the Indian firm’s new machines, with glowing reviews for the twin-cylinder engine coming from all quarters.

So when Royal Enfield offered up a GT 650 for a bolt-on build, no cutting or welding allowed, Mark gathered up his friends and got down to business, producing a slick YouTube series so everyone could join the journey. With the bike picked up from Motociclo, it was out to the track with motoDNA to set a benchmark time and see what the stock bike could deliver, reeling off a 1.20min lap and leaving the big man with a smile on his face. The next baseline to establish was just how much power the RE was pumping out and Harley Borkowski of RB Racing strapped the bike down to his dyno where the twin spat out a healthy 42hp.

Impressive stuff for what is a learner legal motorcycle in Australia, but wanting more power it was off to see James from Spread Cheese Fabrication to let him work his magic. A true old school fab shop with sissy bars on the wall, James built an all new stainless steel system for the GT 650, ditching the heavy stock mufflers and replacing them with a pair of 13″ Big Mouth Reverse Cone Megaphones, also made from S/S in a brushed finish. They look trick as hell, give the bike a thunderous sound and save a massive 14kg over the stock system! They again proved their worth as back at RB Racing Harley fitted and tuned a Power Commander and the power figure jumped to 48HP.

Back at Hawwa HQ, it was time to improve the handling and a call to Suspensions R US in Victoria had them sorting out a YSS transformation for the front and back. Mark pulled the stock forks and sent them down so the guys could play with the internals and maximise their performance. Packaged back up they returned along with a set of YSS Suspension RG362 piggyback shocks for the rear, utilising heavier springs for the 105kg rider. Once the mechanical work was done, the bike was given a once over by mechanic Brad at Tracker & Co. to ensure everything was just right, always a smart move with a home build.

While the focus was on what the GT 650 could do on the track, there was no way it was going to be left visually stock. So a trip was taken to visit Jason at Gasoline Motor Co. who has one hell of a setup and supplied some C-Racer.com parts for the build. The main component was the seat unit with integrated taillight that’s designed for the Royal Enfield and comes with your choice of upholstery colour and stitching, the light brown chosen for the task. Autologue Design also sent over a set of their side covers and that unmistakable front fairing, a Reck 2.0, that helps to give the bike its knock-out appearance.

But as good as the bodywork is, it’s not going to turn any heads sitting in gel coat, so Mark took it all down to the guys at Colourfuel in Kirrawee. They simply do some of the best paintwork you will see anywhere in the world, so with a twist on a British Racing Green in mind, it was left in their more than capable hands to come up with a design and final colour. As always they knocked it out of the park with the stunning green flake, matched to a timeless Red and Bronze design. To finish off the build Motogadget supplied a set of their glassless mirrors and their insanely bright mo.blaze tens2 indicator/brake light combination, the smallest of its kind in the world.

Back at the South Circuit at Sydney Motorsport Park and the results were incredible, a full 6 seconds faster than stock and ten seconds faster with Aussie Stig on board for a 1.10min lap time. “I came to the track excited to see how it would perform but not in my wildest fantasies did I think it would turn into the most fun I’ve had on track. Part of that was the battle with a professional racer to set the fastest time and part of it was just carving corners knee down and outperforming other intermediate riders on litre plus sports bikes,” says Hawwa with a smile. The YSS suspension and exhaust alone proving to be must haves for any GT 650 owner and now we just hope that Royal Enfield will give the green light for the beautiful green bike to go to the next level, more power please Sir!