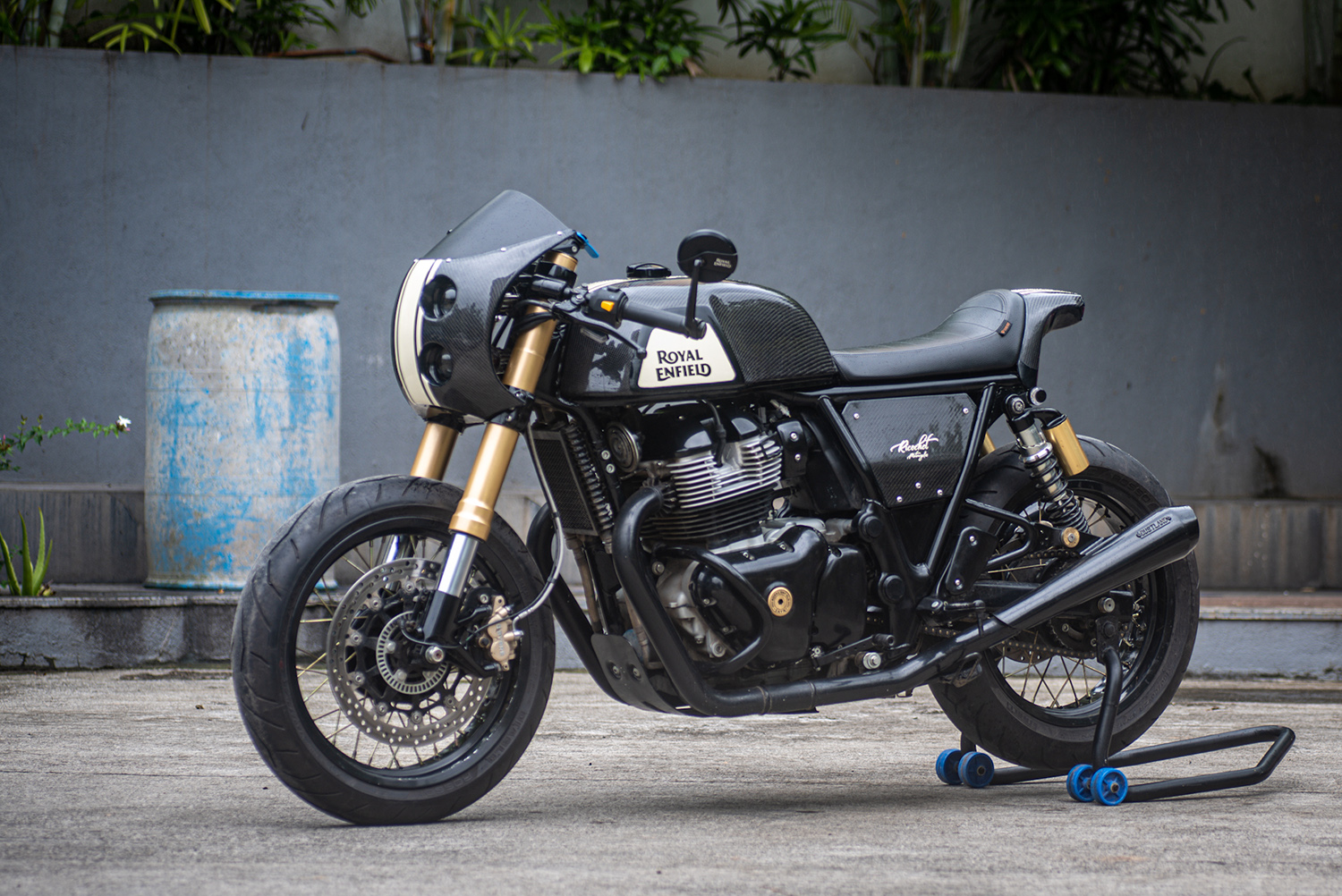 There are few places in the world like Pune, India, a city with an incredible mix of ancient structures like the cave temples that date back to the 8th century, all the way through to some of the most advanced IT businesses on the planet. Amongst the old and the new, it has also emerged as the country’s ‘Motor City, with a massive presence of automotive manufacturers both local and foreign. So where better to find a mechanical engineer with a love of two wheels, a hands-on attitude and pride in the local product. Srinivas Adilapuram is just that man and with a little help from his friends, he’s built this cool as can be carbon clad cafe racer from a Royal Enfield Continental 650.

Away from his work at Cummins Turbo Technologies, Srini loves to be out riding in the countryside that surrounds the city, usually with a camera in his backpack to capture the many incredible sights. So, in need of a new two-wheel companion, he went on the hunt for a brand new bike and just couldn’t look past the pride of his home country, the Royal Enfield. The 650cc range offers one of the most versatile platforms on the market, both in terms of its riding style and customisation potential, which is exactly what he had in mind.

“I just was not happy with the stock appearance of the bike. With a vision to make a unique cafe racer, I started brainstorming and had a few ideas on what I wanted. With this, I approached Devashish at Ricochet Motorcycles in Pune to help me with the build.” Together they sat down and did a brainstorming session on the best ways to improve the looks of the RE and also give it the vibe that Srini was after, that let him get his hands dirty along the way and not break the bank in the process.

Instantly beefing up the looks and drastically improving the handling is the fitment of a set of USD gold forks, originally fitted to a new Benelli TNT 600. With the stock hubs to remain and only supporting a single disc brake, the radial-mount was removed from one side for a cleaner look. The hubs might be factory but to match the big new forks the wheels had to grow too and new rims measuring 3.5in and 4.5in front to rear have been laced up. Fitted with Pirelli Diablo Rosso II rubber, Srini had the look and the handling he was after.

To help improve the overall aesthetic a very creative a clever solution was found, “While carbon fibre was not part of the plan, the idea sparked in one of my discussions with Devashish, about doing a carbon fibre body came up. With the constraints I had, I decided to go for lamination. This was also a DIY which I did myself,” Srini explains. The tank and side covers look infinitely better in the carbon look and given it’s not a race bike, not being the real thing is really not at all an issue.

It’s also a serious money saving, which meant there was more in the kitty to custom craft the awesome front cowl that helps give the bike its signature look and no doubt provides some decent wind relief too. The offset twin Hella projector lights, tinted screen and race stripe all pull it together for a tough front end. The rear is far more minimalist, the design is centred around the RE Himalayan tail light that has been used, and then forms up into a neat backstop for the seat itself.

That seat is an ultra neat, diamond-stitched unit that provides plenty of comfort and the pattern is mirrored on the knee pads on the side of the tanks. To then help pull the whole look together, Srini stripped down the bike and sent out a huge number of components for powder coat in black, allowing the raw and gold metal, and white painted pieces to really pop against the ghosted out background.

To pep the engine up, the twin-cylinder uses a combination of DNA filters and a full Dustland road runner exhaust system, which was also given the blacked-out treatment. Custom controls were an important part of the build, designed to fit the rider and the position he likes, with the clip-ons full billet items. Finally, the RE could be finished out in a minimalist effect, utilising clear indicators and a neat single Koso TNT64 speedo. The end result is a beauty; super clean, totally custom and improved in every single way, showing that if you follow Srini’s lead, you can have a killer bike without breaking the bank or risking the wrath of your significant other.