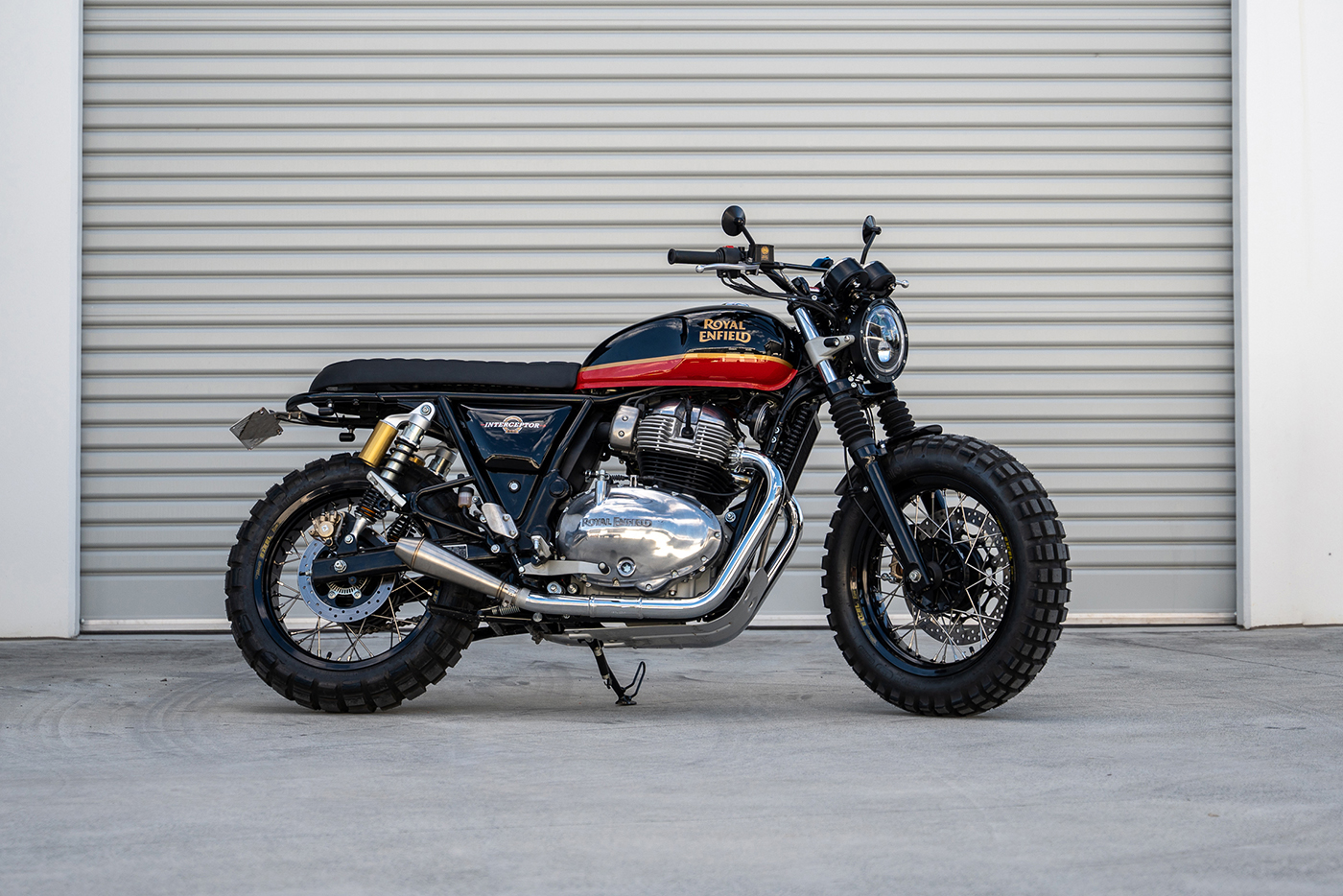 For millions of bikers around the world, strolling into a big motorcycle dealership with all of those sweet machines on the showroom floor is a little like walking through the gates of heaven. But for all of the people who walk through the door, only a very small percentage will sign on the dotted line and buy a brand-new bike. An Aussie named Jefferson recently did just that and slapped down his cash for a zero milage Royal Enfield 650 twin. They’re a brilliant bike straight out of the box and budget friendly too, so he thought why not use those extra coins for some customisation? And it was straight over to Tom Gilroy and the team at Purpose Built Moto for a ‘Quick Fix’ to add some personalised flair.

A new bike is a beautiful thing, with no hidden gremlins to worry about and the joy of warranty should anything out of character go wrong. And there is nothing like that feeling of rocking up to see your mates and to show off your new pride and joy. Which a hell of a lot of people have been doing in recent years as the RE 650 Twins have proven popular around the world for their classic looks, peppy performance and the sheer value for money they represent. Worried about reliability?

Chris Gentle of Threads of Fortune fame, a long-time motoring industry professional has done 80,000km on his 650 in the last few years and barely needed anything but basic maintenance and some relays. So it’s no surprise with the Enfields proving their worth, that people are thinking about some mods from day one! “We quite often see a lot of riders that have picked up their bike from the dealership and head straight to the PBM garage to add on a few custom touches to make their bike uniquely theirs. We’re more than happy to oblige in that kind of situation because quite often it turns out to be a nice little bike,” Tom tells us.

And he’s spot on, with emissions laws ruining exhausts, horrible factory number plate holders etc, a little tweaking can make a big difference. The first change on this machine was to give the bike some new wheels and lower the stance, and the changes are based on the factory hubs. “The bike came to us with the skinny factory 19” and 18” setup. Jefferson wanted something a little bit bolder, so we’ve stripped the standard wheels and re-laced them to a 17” front and back. Now we’re running a 130 on the front and a 170 on the rear.”

Instantly the classically styled bike takes on a far tougher appearance and Tom managed to squeeze in the maximum tyre width, without needing to change the swingarm or triple trees. “The tyres that we’re running are the Continental TKC80 and with that mod we’ve had to change a few bits and pieces, especially on the front end. The standard front fender was scrapped and we’ve rebuilt a custom piece using our rear fender kit. This is a wider fender that we’ve released, fitted over the big bold front wheel that utilises the factory mount.”

Having always loved the PBM lighting and electrical packages, Jefferson wanted some of those goodies on his own whip and the first item to be changed was the headlight. Using the factory mounts, a PBM 7” Flashpoint unit goes in, that not only looks trick but has the added advantage of high-intensity LEDs for plenty of extra light. The unit is joined on the mounts by PBM 3-in-1 dome indicators for a really clean front end feel.

“On the handlebars, we’ve used a similar bend to standard in a black powder coat finish. Jefferson is a pretty tall guy so we wanted to make sure he had enough room when he was sitting on this Royal Enfield GT650.” The stock switch gear and levers are retained, but a Quad Lock mount allows a smartphone to be attached and a set of PBM Scrambler mirrors are a much nicer touch than the big chrome stock pieces. At the rear the big fender is gone for a nice look at those fat tyres and “we’ve fitted up a PBM Tail Tidy Kit and then used a set of our Dome 3-in-1’s to act as the tail/brake light and indicators.”

Turning to the mechanical side of the package and those stock mufflers are big, really bloody big. They also weigh a ton, so for a 5kg weight saving and a beautiful sound, Tom modified the headers to accept a pair of PBM Torpedo mufflers. The final modification you may never have noticed, but with Jefferson enjoying having his better half on the back of his bike, the guys modified the stock seat.

It’s been flattened out for more comfort, with quality high-density foam and then Timeless Auto Trim completed the look with their always beautiful leather work. The result is a truly refined RE that proves a few very clever mods on a brand-new bike make for one excellent custom creation without going crazy on the credit card.