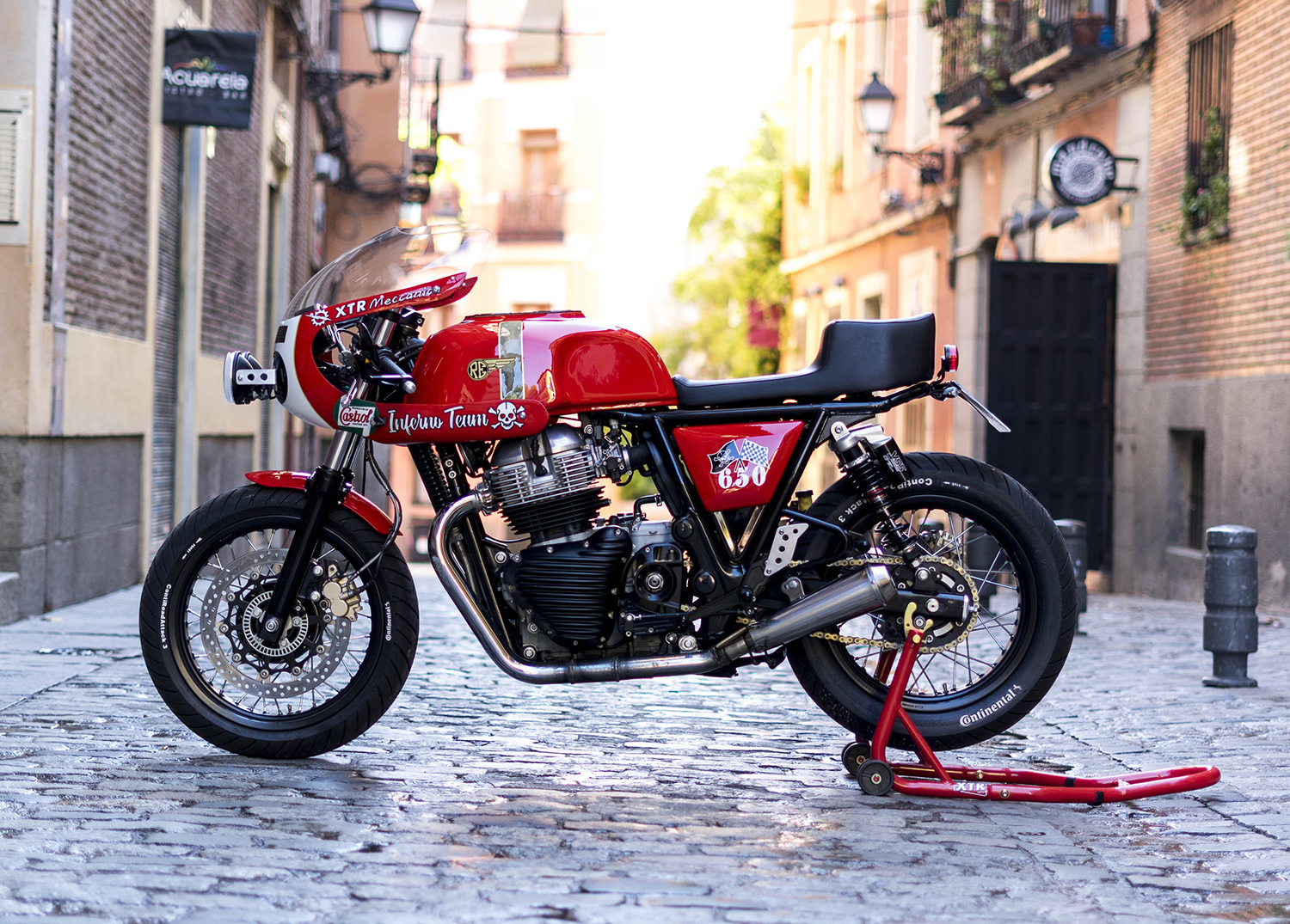 As we speak the mechanics of all the teams from the FIM Endurance World Championship are putting the final touches on their race machines before heading to the Paul Ricard circuit. It is there next weekend that they will do battle in the 24-hour race, the Bol d’Or, where man and machine are pushed to the absolute limit. Endurance racing has a rich history and provides vital feedback to manufacturers, as their production superbikes face the ultimate torture test. Inspired by the motorcycles of the past that have tackled the 24hr race, Pepo Rosell of XTR Pepo in Madrid has made building replicas of these bikes an art form. And he’s back with another beauty, a Royal Enfield 650 that brings the best of the Bol d’Or to the streets.

All of Pepo’s builds get a name and the RE is no different, known as ‘Lilith’, a demonic figure in Judaic mythology who is supposedly the primordial she-demon. Yikes! But no, Pepo hasn’t gone to the dark side, the name was chosen by his client, a tattoo artist, who also came up with the skull logo that forms part of the graphics. And it seems the bike had earned her name long before she arrived at XTR, having tossed the owner off and made a mess of itself in the process.

So the crashed bike was delivered to Pepo with the instruction to breathe new life into the demon and there simply isn’t a better man for the job. With all of the busted bits off the bike, Pepo could get down to work and cut back the rear subframe just behind the shock mounts. A squared-off hoop was welded into place and so too a bracket for the license plate holder. Now he could turn his attention to the seat and he’s come up with the perfect mix of race styling and street comfort. All designed and built in-house, the ’70s design is wrapped in smooth black leather.

The factory tank was never going to survive, Pepo rarely uses them, but in designing the replacement he picked up some of the original RE lines to stay true to the brand. Crafted from fibreglass it’s simply a work of art, incorporating serious racer knee dents and clear fuel level stripes. But the pièce de résistance is without question the endurance racing inspired dry brake filler system. CNC machined from high-quality alloy, it looks exactly like the real thing, but designed for street use it features a simple twist-off cap on the filler side.

The slick looking front fairing is another XTR Pepo piece, that is mounted onto a hand fabricated front stay and features a beautifully integrated clear screen. Standing to attention out the front is the all important twin light setup, vital for the night time period of a 24hr race and a must for the road. These too are XTR components and are mounted to the workshop’s own stay, with the wiring running neatly back through the fairing. The front guard too is modified into more of a blade style with a new mount that serves as a fork brace.

Those forks are dropped through a custom CNC RIGA upper triple clamp that is both stronger and lighter than the factory item. To further reduce weight, this time the all-important unsprung mass, the rims have been replaced with lightweight items and laced to the factory hubs before being wrapped up in sticky Continental Road Attack 3 tyres. The front brakes also get a boost with the addition of a Brembo Gold master cylinder and braided stainless line. With the rear end brought up to scratch with a set of YSS fully adjustable rear shocks, featuring progressive springs.

To make his client feel like a racer while riding, Pepo has thrown a bunch of his own bits at the bike, starting with a set of clip-ons and XTR bar end weights. The levers are XTR’s own billet items, while a set of K speed pegs and heel guards take care of the rider’s feet. A Domino quick action throttle joins the party and on the other side of the bars, a GSXR clutch lever perch now has an XTR cable to control. A full set of LED lights and Highside mirrors and Pepo had to bike ready to pass a roadworthy test.

But any decent race rep couldn’t end there and the engine came in for some attention too, with CNC side covers and sprocket cover giving the twin a far more sinister look. To pick up the pace the headers have been shortened and fitted with a set of Turbokit mufflers, that look trick, and the intake is freed up with DNA air filters inside a cut off factory box. With the masters work done, the final piece to the puzzle was to have Artenruta lay down the amazing paint and graphics package that really makes the RE stand out. Now having been pimped by Pepo, the owner can enjoy next weekend’s Bol d’Or and when the itch comes, he’s got the perfect race replica to take for a blast.